Thomsenolite is a mineral with formula: NaCaAlF6·H2O. It is an alteration product of cryolite. [2] 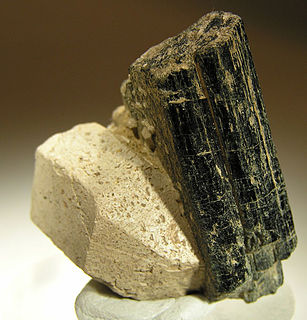 Hornblende is a complex inosilicate series of minerals. It is not a recognized mineral in its own right, but the name is used as a general or field term, to refer to a dark amphibole. Hornblende minerals are common in igneous and metamorphic rocks. 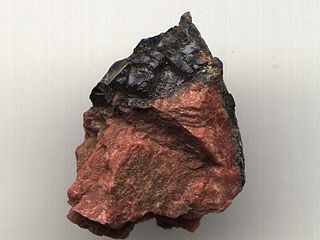 Gadolinite, sometimes known as ytterbite, is a silicate mineral consisting principally of the silicates of cerium, lanthanum, neodymium, yttrium, beryllium, and iron with the formula (Ce,La,Nd,Y)2FeBe2Si2O10. It is called gadolinite-(Ce) or gadolinite-(Y), depending on the prominent composing element. It may contain 35.5% yttria sub-group rare earths, 2.2% ceria earths, as much as to 11.6% BeO, and traces of thorium. It is found in Sweden, Norway, and the US.

Axinite is a brown to violet-brown, or reddish-brown bladed group of minerals composed of calcium aluminium boro-silicate, (Ca,Fe,Mn)3Al2BO3Si4O12OH. Axinite is pyroelectric and piezoelectric.

Chalcocite, copper(I) sulfide (Cu2S), is an important copper ore mineral. It is opaque and dark gray to black, with a metallic luster. It has a hardness of 2.5–3 on the Mohs scale. It is a sulfide with a monoclinic crystal system. 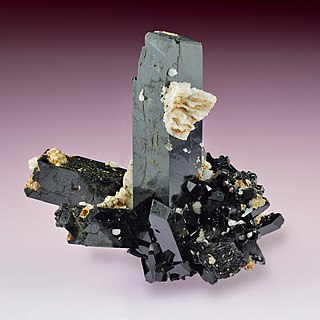 Aegirine is a member of the clinopyroxene group of inosilicate minerals. Aegirine is the sodium endmember of the aegirine-augite series. Aegirine has the chemical formula NaFeSi2O6 in which the iron is present as Fe3+. In the aegirine-augite series the sodium is variably replaced by calcium with iron(II) and magnesium replacing the iron(III) to balance the charge. Aluminium also substitutes for the iron(III). Acmite is a fibrous, green-colored variety.

Hausmannite is a complex oxide of manganese containing both di- and tri-valent manganese. The formula can be represented as Mn2+Mn3+2O4. It belongs to the spinel group and forms tetragonal crystals. Hausmannite is a brown to black metallic mineral with Mohs hardness of 5.5 and a specific gravity of 4.8. 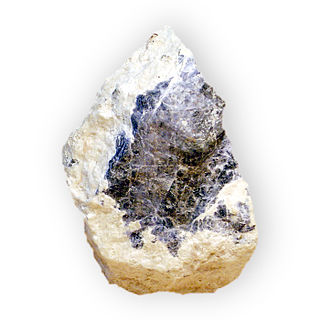 Cancrinite is a complex carbonate and silicate of sodium, calcium and aluminium with the formula Na6Ca2[(CO3)2|Al6Si6O24]·2H2O. It is classed as a member of the feldspathoid group of minerals; the alkali feldspars that are poor in silica. Yellow, orange, pink, white or even blue, it has a vitreous or pearly luster; a hardness of 5–6 and an uneven conchoidal fracture. It is unusual among the silicate minerals in that it will effervesce with hydrochloric acid due to the associated carbonate ions. 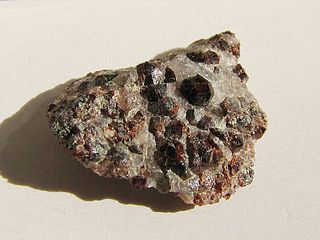 Triploidite is an uncommon manganese iron phosphate mineral with formula: (Mn,Fe)2PO4OH. It crystallizes in the monoclinic crystal system and typically occurs as elongated and striated slender prisms which may be columnar to fibrous. Its crystals may be pinkish to yellowish brown or red-orange.

Chloritoid is a silicate mineral of metamorphic origin. It is an iron magnesium manganese alumino-silicate hydroxide with formula (Fe, Mg, Mn)
2Al
4Si
2O
10(OH)
4. It occurs as greenish grey to black platy micaceous crystals and foliated masses. Its Mohs hardness is 6.5, unusually high for a platy mineral, and it has a specific gravity of 3.52 to 3.57. It typically occurs in phyllites, schists and marbles.

Jacobsite is a manganese iron oxide mineral. It is in the spinel group and forms a solid solution series with magnetite. The chemical formula is (Mn,Mg)Fe2O4 or with oxidation states and substitutions: (Mn2+,Fe2+,Mg)(Fe3+,Mn3+)2O4. 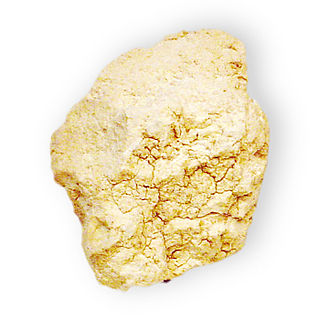 Hectorite is a rare soft, greasy, white clay mineral with a chemical formula of Na0.3(Mg,Li)3Si4O10(OH)2.

Anandite is a rare phyllosilicate with formula (Ba,K)(Fe2+,Mg)3(Si,Al,Fe)4O10(S,OH)2. It crystallizes in the monoclinic crystal system. It is black in color with a glassy luster and a near perfect cleavage.

Linnaeite is a cobalt sulfide mineral with the composition Co+2Co+32S4. It was discovered in 1845 in Västmanland, Sweden, and was named to honor Carl Linnaeus (1707–1778).

Manganosite is a rare mineral composed of manganese(II) oxide MnO. It was first described in 1817 for an occurrence in the Harz Mountains, Saxony-Anhalt, Germany. It has also been reported from Langban and Nordmark, Sweden and at Franklin Furnace, New Jersey. It also occurs in Japan, Kyrgyzstan and Burkina Faso.

Lithiophosphate is a natural form of (pure) lithium orthophosphate. It is an exceedingly rare mineral, occurring in some special types of pegmatites.