The Thomson–East Coast line (TEL) is a medium-capacity Mass Rapid Transit (MRT) line under development in Singapore. [3] Coloured brown on the rail map, it is fully underground serving 32 stations over 43 kilometres (27 mi) in length, and will be among the world's longest driverless rapid transit lines. It will run along a combined north–south and east–west corridor, starting in the north at Woodlands town, passing through Upper Thomson and the towns of Ang Mo Kio and Bishan, before heading south to Orchard Road and Marina Bay, then running eastwards along the east coast through Kallang, Marine Parade and Bedok South, before ending at Upper East Coast.

The line was announced by the Land Transport Authority on 15 August 2014, with the merger of the previously planned Thomson (TSL) and Eastern Region (ERL) lines. By then, construction of the Thomson line has begun in January 2014. The line is set to be opened in 5 stages, with stage 1 (from Woodlands North to Woodlands South stations) opened on 31 January 2020 and stage 5 (from Bedok South to Sungei Bedok stations) opening in 2024. In January 2019, an infill station Founders' Memorial station was announced, with the LTA considering to integrate the Changi Airport Branch into the TEL. When fully opened, it is expected to serve about 500,000 commuters daily in the initial years, rising to one million commuters daily in the long term. It is the fourth MRT line to be operated by SMRT Trains Ltd and also the fourth to be completely automated and driverless. The line is currently served by Mandai Depot, with another depot East Coast Integrated Depot opening in 2024, and services are operated by CT251 trains. [4]

The Thomson line was first announced on 25 January 2008. Several architectural and engineering consultancy packages were released in 2010 which indicated an increase in the number of stations from 18 in the initial announcement to the current 22 and length of the line from 27 to 30 km (17 to 19 mi). [5]

The Land Transport Authority announced on 16 June 2011 the location of the depot for the line, which was due to begin construction at the end of 2012. It also announced Woodlands as an interchange with the existing North South line and an additional station located near to Republic Polytechnic. [6]

Construction of the Thomson line began in January 2014. [9]

The groundbreaking ceremony took place on 27 June that year at Woodlands. All the working station names were confirmed as the final names except for Sin Ming station which was changed to Bright Hill.

In addition, a station box located in between Springleaf and Lentor Station named "Tagore" is speculated to be a MRT station once the area is developed enough similar to Hume on the Downtown line and Bukit Brown on the Circle line. [10]

The first stage of the line, involving Woodlands North, Woodlands and Woodlands South, began operation on 31 January 2020 and currently exists on 4.2km length of track. [11]

The Eastern Region line (ERL) was first announced on 23 October 2001. [12] In its preliminary plans, ERL was to have been a 40 kilometre rectangular loop that would complement the existing East West line and enhance inter- and intra-town travelling in the eastern region. It would have looped around the Jalan Besar and East Coast areas, intersecting the Circle line and other lines along the way, benefiting residents in Tampines, Bedok, Marine Parade, MacPherson and Kaki Bukit. [13] The northern part of Eastern Region line is renamed to Downtown line stage 3, whereas the southern part of Eastern Region line is renamed to East Coast stretch of Thomson-East Coast line. Sungei Bedok became an interchange between the Downtown and Thomson-East Coast lines.

On 11 July 2012, Josephine Teo, Minister of State, Ministry of Finance and Ministry of Transport, announced that the Land Transport Authority is starting architectural and engineering consultancy studies for the Eastern Region line, which will eventually connect to the Thomson line. [14]

The director of rail services from the Land Transport Authority, Melvyn Thong, said on 29 May 2013 at the Modern Railways conference that there are plans to extend the Eastern Region line to the future Changi Airport Terminal 4 which was at that time, set to be ready by 2017 [15] but on 1 June that year, the Land Transport Authority clarified that the Eastern Region line will not provide an MRT link to the planned Terminal 4. [16] On 30 August that year, Minister of State for Transport Josephine Teo unveiled plans that it will be linked to the future Changi Airport Terminal 5, a mega terminal, which will be the largest terminal in Singapore upon completion in the 2030s. [17]

The Eastern Region line was merged with the Thomson line on 15 August 2014 to form the Thomson–East Coast line, extending the project from three to five stages, [3] with nine more stations.

The groundbreaking ceremony for the East Coast stretch took place at Marine Parade on 21 July 2016. All the working station names, including Xilin on the Downtown line extension, were confirmed as the final names except for Amber station which was changed to Tanjong Katong. The authorities are also considering extending the Thomson–East Coast line to all terminals at Changi Airport, including the upcoming Terminal 5, announced Transport Minister Khaw Boon Wan. [18] [19]

On 28 August 2019, the Land Transport Authority awarded several non-fare businesses along the line, with Asiaray Connect awarded an advertising contract and a consortium, made up of SMRT Experience, JR Business Development SEA and Alphaplus Investments appointed to run retail space. This is the first time the LTA outsourced these non-fare businesses. [21]

On 19 September that year, Transport Minister Khaw Boon Wan revealed that the opening of the first stage of the Thomson–East Coast line from the Woodlands North to Woodlands South stations was delayed to January 2020 from the indicative time of 2019 announced earlier, [22] subsequently confirmed as 31 January 2020. Self-assistance kiosks were installed at all TEL MRT stations and will be rolled out to all stations. [8] [23]

On 11 January 2020, SMRT and LTA hosted an open house for the first stage of the line, with the stage opening for revenue service on 31 January 2020. The opening of the second stage was delayed to the first quarter of 2021 as a result mainly due to the stoppage of construction works during the circuit breaker period as well as the quarantine and testing of all foreign workers in dormitories. [24] [25] [26] [27] [28]

Alstom will also be supplying platform screen doors for the Thomson–East Coast line. [37]

The first generation of rolling stock being introduced onto the Thomson–East Coast line is the CT251, built by Kawasaki Heavy Industries & CRRC Qingdao Sifang in Qingdao, China. These trains are the first in Singapore to have 5 doors per car, and are completely automated and driverless. 91 of the type are being built, to service both the Thomson–East Coast line (TEL) and the future Singapore–Johor Bahru Rapid Transit System (RTS). [38] The trains will be housed at the Mandai Depot and the future East Coast Integrated Depot (shared with the Downtown and the East West lines). [39]

The Mass Rapid Transit, abbreviated and referred to in local parlance as the MRT, is a heavy rail rapid transit system that constitutes the bulk of the railway network in Singapore, spanning—with the exception of the forested core and the island's rural northwest—the length and width of the city-state's main island. The first section of the MRT opened on 7 November 1987, and the network has since grown rapidly in accordance with Singapore's aim of developing a comprehensive rail network as the backbone of the country's public transportation system, with an average daily ridership of 3.384 million in 2019, approximately 83% of the bus network's 4.099 million in the same period.

The North South line (NSL) is a high-capacity Mass Rapid Transit (MRT) line in Singapore, operated by SMRT. Coloured red on the rail map, the line is 45 kilometres (28 mi) long and serves 27 stations, 11 of which, between the Bishan and Marina South Pier stations, are underground. It runs from Jurong East station, located in Western Singapore, to Marina South Pier station in the Central Area, via Woodlands station in northern Singapore. The line operates for 19 hours a day, with headways of up to 3 minutes during peak hours and 7 minutes during off-peak hours. All the trains on the NSL run with a six-car formation. 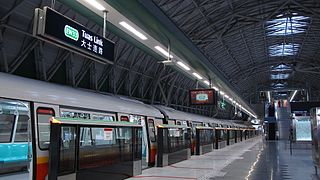 The East West line (EWL) is a high-capacity Mass Rapid Transit (MRT) line operated by SMRT, running from Pasir Ris station in the east to Tuas Link station in the west, with an additional branch between Changi Airport and Tanah Merah stations. It is the second Mass Rapid Transit line to be built in Singapore. The 57.2 kilometres (35.5 mi) line is the longest on the MRT network, with 35 stations, 8 of which are underground. The line is coloured green on the rail map. 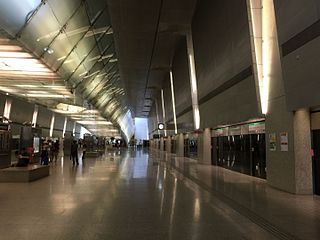 Marina Bay MRT station is an underground Mass Rapid Transit (MRT) interchange station on the North South line (NSL) and Circle line (CCL), operated by SMRT Trains. The station is located on the boundary of the Downtown Core and Straits View planning areas in Singapore and was built alongside Bayfront Avenue. As the name suggests, it is located near Marina Bay.

Expo MRT station is a Mass Rapid Transit (MRT) interchange station on the Changi Airport branch line of the East West line (EWL) and the Downtown line (DTL). This station is located along Changi South Avenue 1 at the junction of Expo Drive, in between Changi City Point and the Singapore Expo, in the Tampines planning area, Singapore.

The history of the Mass Rapid Transit system of Singapore commenced with its planning in the 1960s, which finally led to its opening in 1987 with the launch of the 6 km section of the North South Line from Yio Chu Kang to Toa Payoh. It now has six lines in operation with a total combined route length of 202.4 km (125.8 mi) and 122 stations. The Light Rail Transit which opened in 1999 acts as a feeder service to the MRT network.

The Downtown Line (DTL) is a medium-capacity Mass Rapid Transit (MRT) line in Singapore operated by the SBS Transit company. It currently runs from Bukit Panjang station in the north-west to Expo station in the east via the Central Area. Coloured blue on the rail map, the line serves 34 stations, all of which are underground. The DTL is the fifth MRT line on the network to be opened and the third line to be entirely underground. It is the second MRT line to be operated by SBS Transit, after the North East Line. 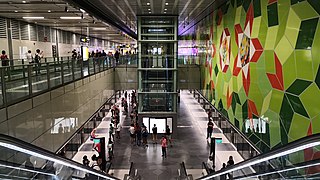 Woodlands South MRT station is an underground Mass Rapid Transit station on the Thomson–East Coast line in Woodlands, Singapore, located underneath Woodlands Avenue 1 at the junction with Woodlands Drive 16 and Woodlands Drive 17. It is located directly under Christ Church Secondary School and located near ACE The Place Community Club and Yusof Ishak Mosque as well as Singapore Sports School.

The Cross Island line (CRL) is an upcoming high capacity Mass Rapid Transit (MRT) line in Singapore. It is currently under planning and will be the eighth MRT line when built. The line will be coloured lime on the rail map.

Sungei Bedok MRT station is a future underground Mass Rapid Transit interchange and terminal station on the Downtown Line and Thomson-East Coast Line in Bedok planning area, Singapore. The station is being built east of where Upper East Coast Road becomes Bedok Road, and will serve residents of the Eastwood estate. Nearby facilities include the Bedok Food Centre, Eastwood Centre and the Laguna National Golf & Country Club.

Xilin MRT station is an underground Mass Rapid Transit station on the Downtown line in Tampines planning area, Singapore. Taking its name from Xilin Avenue which passes overhead, Xilin station serves industries around Changi South, as well as the nearby Tanah Merah Country Club.The station is located at the junction of Xilin Avenue, Changi South Avenue 3 and Laguna Golf Green.

The East Coast Integrated Depot, is a future integrated bus and train depot located in Changi that will serve the East West Line, Downtown Line and Thomson-East Coast Line of the Mass Rapid Transit (MRT) in Singapore.