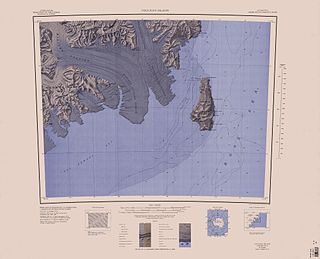 The Airy Glacier is a glacier 20 nautical miles (37 km) long and 6 nautical miles (11 km) wide, flowing west to the northeast portion of Forster Ice Piedmont, near the west coast of the Antarctic Peninsula.

Argonaut Glacier is a tributary glacier about 10 miles (16 km) long in the Mountaineer Range of Victoria Land, Antarctica. It flows east to enter Mariner Glacier just north of Engberg Bluff. It was named by the New Zealand Geological Survey Antarctic Expedition, 1962–63, in association with Aeronaut, Cosmonaut and Cosmonette Glaciers.

Iliad Glacier is a glacier flowing northeast from the central highlands of Anvers Island between the Achaean Range and the Trojan Range into Lapeyrere Bay, in the Palmer Archipelago, Antarctica. It was surveyed in 1955 by the Falkland Islands Dependencies Survey and named by the UK Antarctic Place-Names Committee for Homer's Iliad.

Albone Glacier is a deeply entrenched narrow glacier on the east side of Wolseley Buttress flowing southward from Detroit Plateau on Nordenskjöld Coast in Graham Land, Antarctica.

Haskell Glacier is a small glacier descending from the Christoffersen Heights and draining west between Prism Ridge and the Forbidden Rocks, in the Jones Mountains of Antarctica. It was mapped by the University of Minnesota Jones Mountains Party, 1960–61, and was named by the Advisory Committee on Antarctic Names for Lieutenant Hugh B. Haskell, U.S. Navy, co-pilot on a pioneer flight of November 25, 1961 from Byrd Station to establish Sky-High Camp at 75°14′S77°6′W. 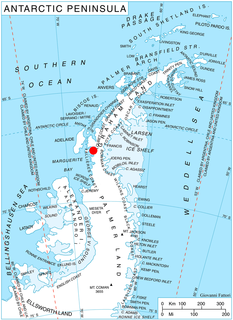 Beakley Glacier is a glacier on the west side of the Duncan Peninsula on Carney Island, flowing north into the Amundsen Sea, with Ramage Point just west of the glacier. It was delineated by the United States Geological Survey from aerial photos taken by U.S. Navy Operation Highjump in January 1947, and named by the Advisory Committee on Antarctic Names for Vice Admiral W.M. Beakley, U.S. Navy, Deputy Chief of Naval Operations for Ship Operations and Readiness during the IGY period, 1957–58.

Chavez Glacier is a glacier about 10 nmi long flowing south from Canisteo Peninsula into Cranton Bay. It was named by the Advisory Committee on Antarctic Names after Pat Chavez of the United States Geological Survey (USGS), Flagstaff, Arizona, co-leader of the USGS team that compiled the 1:5,000,000-scale Advanced Very High Resolution Radiometer maps of Antarctica in the 1990s.

Deadmond Glacier is a glacier about 6 nautical miles (11 km) long, flowing from the east side of Evans Peninsula on Thurston Island into Cadwalader Inlet. It was discovered by the U.S. Navy Bellingshausen Sea Expedition in February 1960, and was named by the Advisory Committee on Antarctic Names for Lieutenant Commander Robert B. Deadmond, executive officer of USS Burton Island, forming part of this expedition. 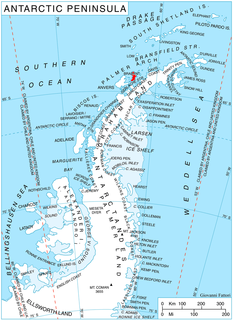 Koch Glacier is a glacier 3 nautical miles (6 km) long immediately east of Jenner Glacier on the south side of Brabant Island, in the Palmer Archipelago, Antarctica. It drains the south slopes of Solvay Mountains and flows south-southwestwards into Chiriguano Bay southeast of Paprat Peak.

Tverregg Glacier is a glacier between Heksegryta Peaks and Tverregga Spur in the Kirwan Escarpment, Queen Maud Land. Mapped by Norwegian cartographers from surveys and air photos by Norwegian-British-Swedish Antarctic Expedition (NBSAE) (1949–52) and additional air photos (1958–59), and named Tverreggbreen.

Fourcade Glacier is a glacier at the head of Potter Cove, Maxwell Bay, on King George Island in the South Shetland Islands. It was named by the Polish Antarctic Expedition, 1980, after Nestor H. Fourcade of the Instituto Antartico Argentino, who made detailed geological investigations of Potter Cove and Fildes Peninsula in several seasons, 1957–58 to 1960–61.

Frankenfield Glacier is a small glacier in the northeast part of Noville Peninsula, Thurston Island, in Antarctica. It flows east-northeast to the Bellingshausen Sea between Mount Feury and Mulroy Island. The glacier was first roughly delineated from air photos taken by U.S. Navy Operation Highjump in December 1946, and was named by the Advisory Committee on Antarctic Names for Lieutenant Chester Frankenfield, a meteorologist on the U.S. Navy Bellingshausen Sea Expedition, who established an automated weather station on Thurston Island in February 1960.

Hale Glacier is a glacier about 6 nautical miles (11 km) long, located just east of Mount Simpson on Thurston Island, Antarctica, and flowing southwest to the Abbot Ice Shelf in Peacock Sound. It was delineated from air photos taken by U.S. Navy Squadron VX-6 in January 1960, and was named by the Advisory Committee on Antarctic Names (US-ACAN) for Lieutenant Bill J. Hale, U.S. Navy, a helicopter pilot aboard USS Burton Island who made exploratory flights to Thurston Island in February 1960.

McManus Glacier is a glacier flowing north into Palestrina Glacier, in northwestern Alexander Island, Antarctica. It separates Lassus Mountains on the west from Sofia University Mountains on the east. The glacier was surveyed by the British Antarctic Survey (BAS), 1975–76, and was named by the UK Antarctic Place-Names Committee in 1980 after Alan James McManus, a BAS cook at Grytviken and Faraday Research Station, 1971–73, and at Adelaide Island and Rothera Research Station, 1975–78.