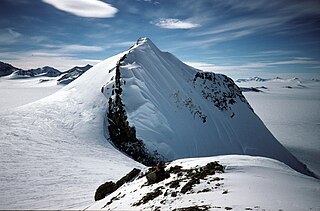 Mount Jackson is a mountain that dominates the upland of the southern part of the Antarctic Peninsula. It is located in Palmer Land, within the Antarctic claims of Argentina, Chile and the United Kingdom. With an elevation of 3,184 metres (10,446 ft), Mount Jackson was once thought to be the highest mountain in the Antarctic Peninsula and the British Antarctic Territory, before the true height of Mount Hope was measured. Discovered by members of the United States Antarctic Service, 1939–41, it was named for Andrew Jackson, the seventh President of the United States. The first ascent of Mount Jackson was made by a team led by John Crabbe Cunningham of the British Antarctic Survey (BAS) in 1964. Mount Jackson's geology was studied in 1972 as part of the Palmer Island investigations by a team of geologists.

Belgica Mountains is an isolated chain of mountains about 10 miles (16 km) long, standing 60 miles (97 km) east-southeast of the Sor Rondane Mountains in Queen Maud Land, in the Antarctic. The chain was discovered by the Belgian Antarctic Expedition (1957-1958) under Gaston de Gerlache, and named after the ship Belgica, commanded by his father, Lt. Adrien de Gerlache, leader of the Belgian Antarctic Expedition of 1897-99. The Prince de Ligne Mountains stand about 10 mi (16 km) north of the Belgica Mountains.

Mount Wisting is a rock peak, the northwesternmost summit of the massif at the head of Amundsen Glacier in the Queen Maud Mountains. In November 1911, a number of mountain peaks in this general vicinity were observed and positioned by the South Pole Party under Roald Amundsen. Amundsen named one of them for Oscar Wisting, a member of the party. The peak described was mapped by United States Geological Survey (USGS) from surveys and U.S. Navy aerial photography, 1960–64. For the sake of historical continuity and to commemorate the Norwegian exploration in this area, the Advisory Committee on Antarctic Names (US-ACAN) has selected this feature to be designated Mount Wisting. Other peaks in the massif have been named for members of Amundsen's South Pole Party.

Mount Bramhall is a peak of the Walker Mountains, located 5 nautical miles (9 km) east of Mount Hawthorne on Thurston Island. It was first delineated from aerial photographs taken by U.S. Navy Operation Highjump in December 1946, and named by the Advisory Committee on Antarctic Names for Dr. E.H. Bramhall, a physicist of the Byrd Antarctic Expedition in 1933–35.

Mount Wever is a mountain which is a northern outlier of Du Toit Mountains, rising to about 1,700 m south of Beaumont Glacier and 13 nautical miles (24 km) southwest of Dietz Bluff, on the Black Coast, Palmer Land. Named by Advisory Committee on Antarctic Names (US-ACAN) in 1988 from a proposal by P.D. Rowley of United States Geological Survey (USGS). Named after Hein E. Wever, British Antarctic Survey (BAS) geologist, member of a joint BAS-USGS field party to the Black Coast, 1986–87.

Dorrel Rock is a rock outcrop 11 nautical miles (20 km) southwest of the summit of Mount Murphy, protruding through the ice near the head of Pope Glacier, on the Walgreen Coast, Marie Byrd Land. It was mapped by the United States Geological Survey from surveys and U.S. Navy air photos, 1959–66, and was named by the Advisory Committee on Antarctic Names after Leo E. Dorrel, U.S. Navy, a hospital corpsman with the Byrd Station winter party, 1966.

Mount Fell is a mountain 8 nautical miles (15 km) west of Mount Hemmingsen in the northern part of the Werner Mountains in Palmer Land, Antarctica. It was mapped by the United States Geological Survey from ground surveys and U.S. Navy air photos, 1961–67, and was named by the Advisory Committee on Antarctic Names for Jack W. Fell, a biologist on the Eastwind in the cruise along the Antarctic Peninsula in the 1965–66 season.

Mill Mountain is a large flat-topped mountain, 2,730 metres (8,960 ft) high, forming the eastern end of Festive Plateau in the Cook Mountains of Antarctica. This mountain was probably sighted by the British National Antarctic Expedition (1901–04) under Captain Robert F. Scott, who gave the name "Mount Mill," after British Antarctic historian Hugh Robert Mill, to a summit in the nearby Reeves Bluffs. This area was mapped by the United States Geological Survey from surveys and U.S. Navy photography (1959–63). A prominent mountain does not rise from the bluffs, and since the name "Mount Mill" is in use elsewhere in Antarctica, the Advisory Committee on Antarctic Names (1965) altered the original name to Mill Mountain and applied it to the prominent mountain described.

Mount Huffman is a prominent mountain 4 nautical miles (7 km) northeast of Mount Abrams, in the Behrendt Mountains of Ellsworth Land, Antarctica. It was mapped by the United States Geological Survey from surveys and U.S. Navy air photos from 1961–67, and was named by the Advisory Committee on Antarctic Names for Jerry W. Huffman, a scientific leader at Eights Station in 1963.

Mount Marquis is a mountain in the southern part of the Du Toit Mountains, situated 4 nautical miles (7 km) north of Maury Glacier, 28 nautical miles (52 km) south-southwest of Dietz Bluff and 27 nautical miles (50 km) due west of the north end of Pullen Island, on the Black Coast of Palmer Land, Antarctica. It was mapped by the United States Geological Survey (USGS) from U.S. Navy aerial photographs, 1966–69, and was named by the Advisory Committee on Antarctic Names after Peter T. Marquis, a general assistant with the British Antarctic Survey (BAS), and a member of the joint BAS–USGS party to this area, 1986–87.

Janet Thomson also known as Janet Wendy Thomson is a British geologist and the first British woman scientist to complete field research in Antarctica. Thomson Summit and Thomson Glacier are named in her honor. She was a 2001 recipient of the British Antarctic Survey's Fuchs Medal, and in 2003, she was the recipient of the Polar Medal.