The Thon or Ton is a small river in northern France. It is a tributary of the river Oise, which flows into the Seine. It crosses the Ardennes and Aisne departments and is the central river of the Thiérache. [1] 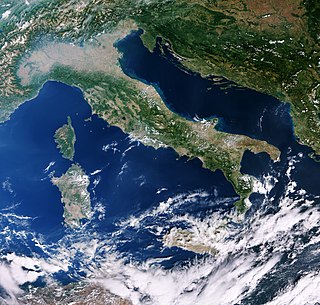 Italy is located in southern Europe and comprises the long, boot-shaped Italian Peninsula, the southern side of Alps, the large plain of the Po Valley and some islands including Sicily and Sardinia. Corsica, although belonging to the Italian geographical region, has been a part of France since 1769. Italy is part of the Northern Hemisphere.

The Mozambique Channel is an arm of the Indian Ocean located between the Southeast African countries of Madagascar and Mozambique. The channel is about 1,600 km (1,000 mi) long and 419 km (260 mi) across at its narrowest point, and reaches a depth of 3,292 m (10,800 ft) about 230 km (143 mi) off the coast of Mozambique. A warm current, the Mozambique Current, flows in a southward direction in the channel, leading into the Agulhas Current off the east coast of South Africa.

Kapitänleutnant Walther Schwieger was a U-boat commander in the Imperial German Navy during First World War. In 1915, he sank the passenger liner RMS Lusitania with the loss of 1,198 lives.

Vilijampolė is an elderate in the city of Kaunas, Lithuania, located on the right bank of the Neris River and the Nemunas River, near their confluence. The elderate covers 1,720 hectares and houses about 32,000 people. It was the home of the Slabodka yeshiva, Knesses Yisrael, and the main site of the Kaunas Ghetto. The Lithuanian Veterinary Academy campus is located in the neighbourhood. Two bridges across the Neris connects Vilijampolė with the main part of the city. Petras Vileišis Bridge connects the district with the Old Town and Varniai Bridge with the neighbourhood of Žaliakalnis. 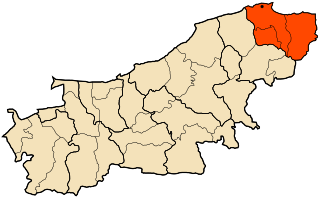 Dellys is a district in Boumerdès Province, Algeria. It was named after its capital, Dellys.

Hà Quảng is a rural district of Cao Bằng Province in the Northeast region of Vietnam.

Żbiki-Kierzki is a village in the administrative district of Gmina Krasne, within Przasnysz County, Masovian Voivodeship, in east-central Poland. It lies approximately 12 kilometres (7 mi) south of Przasnysz and 79 km (49 mi) north of Warsaw.

Lalo is a town, arrondissement, and commune in the Kouffo Department of south-western Benin. The commune covers an area of 432 square kilometres and as of 2013 had a population of 119,926 people.

Szymanowo is a village in the administrative district of Gmina Morąg, within Ostróda County, Warmian-Masurian Voivodeship, in northern Poland. It lies approximately 4 kilometres (2 mi) west of Morąg, 25 km (16 mi) north of Ostróda, and 44 km (27 mi) west of the regional capital Olsztyn.

The extreme points of Ethiopia include the coordinates that are further north, south, east or west than any other location in Ethiopia; and the highest and the lowest elevations in the country.

Pethőhenye is a village in Zala County, Hungary.

Zalaszentlőrinc is a village in Zala County, Hungary.

Mlechevo is a village in the municipality of Sevlievo, in Gabrovo Province, in northern central Bulgaria.

Gjel Glacier is a glacier, 17 nautical miles (31 km) long, flowing north between the steep cliffs of the Luncke Range and Mefjell Mountain, in the Sør Rondane Mountains of Antarctica. It was mapped by Norwegian cartographers in 1957 from air photos taken by U.S. Navy Operation Highjump, 1946–47, and named Gjelbreen. 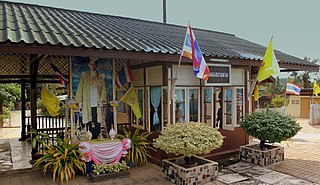