Thonburi Market has been open since 2000, by Bangkok Metropolitan Administration has policy is to build a new public park and market in the Thonburi area like Chatuchak Weekend Market of Phra Nakhon side. In the first phase, available for weekends only. Until in 2002, Samak Sundaravej was the governor of Bangkok extend the available as daily and was officially named Thonburi Market as it's today.

Thonburi Market has 110 rai of land (about 43 acres), divided into 60 rai of public park and 40 rai of market with 10 rai of entrance. Thonburi Market sells many different kinds of goods, including plants, antiques, second-hand goods, pets, food and drinks, fresh and dry food, fashion clothings, ceramics, amulets, furniture and home accessories etc. Especially plants, it's considered as the largest orchid trade center in Thailand, including ornamental fish. It's divided into 11 sections. [1]

Thonburi market is a market that characteristic not other market. Because nearby is a coconut garden flanked by a water-furrows. And also located in Thawi Watthana District, which is the suburb Bangkok as a district that is known as bestest atmosphere. So, this market is suitable for people who like to take a stroll, exercise and relax. 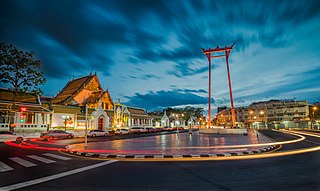 Phra Nakhon is one of the 50 districts (khet) of Bangkok, Thailand. It is the central district of Bangkok, including Rattanakosin Island. Neighboring districts are, from the north, clockwise: Dusit, Pom Prap Sattru Phai, Samphanthawong, and across the Chao Phraya River, Thon Buri, Bangkok Yai, Bangkok Noi, and Bang Phlat.

Taling Chan is one of the 50 districts (khet) of Bangkok, Thailand. Its neighbours, clockwise from the north, are Bang Kruai district of Nonthaburi province and Bang Phlat, Bangkok Noi, Bangkok Yai, Phasi Charoen, Bang Khae, and Thawi Watthana Districts of Bangkok.

Thawi Watthana is one of the 50 districts (khet) of Bangkok, Thailand. Its neighbor, clockwise from north, are Bang Kruai district of Nonthaburi province, Taling Chan, Bang Khae, and Nong Khaem Districts of Bangkok, Sam Phran and Phutthamonthon of Nakhon Pathom province.

Phutthamonthon is a district (amphoe) in the east of Nakhon Pathom province, central Thailand. 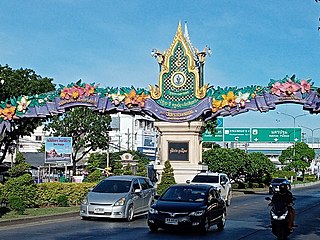 Bang Len is a district (amphoe) in the northern part of Nakhon Pathom province, central Thailand.

Utthayan Road, formerly and still colloquially known as Aksa Road, is a road in Bangkok, which is popularly regarded as the most beautiful road in Thailand. It is a broad avenue in western Bangkok's suburban Thawi Watthana District, and leads to the Buddhist park of Phutthamonthon in the adjacent Phutthamonthon District of Nakhon Pathom Province. It has been maintained by the Public Works Department, Bangkok Metropolitan Administration (BMA). 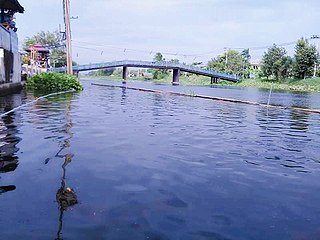 Khlong Maha Sawat, also known as Khlong Chaiyaphruek (คลองชัยพฤกษ์), is a khlong (canal) in Thailand. It is a man-made waterway dug in 1859–1860 in the reign of King Rama IV. Today it is listed by the Fine Arts Department as a national heritage site. It starts from Khlong Lat Bang Kruai near Wat Chaiyaphrueksamala, flows along the border of Nonthaburi's Bang Kruai with Taling Chan and Thawi Watthana of suburban Bangkok, then flows through Phutthamonthon to meet the Tha Chin River at Ngio Rai Subdistrict in Nakhon Pathom's Nakhon Chai Si District. Its length is 28 km. Note: Khlong Maha Sawat and Khlong Prapa Maha Sawat are two different canals.

Sala Thammasop is a khwaeng (sub-district) of Bangkok's Thawi Watthana District. It has an area of 28.698 km2.

Borommaratchachonnani Road, the most part of which is Highway 338, is a main road in Bangkok's Thonburi side and Bangkok Metropolitan Region.

Thawi Watthana is one of the two khwaengs (sub-districts) of Thawi Watthana District, Bangkok's Thonburi side, apart from Sala Thammasop. In 2015 it had a population of 22,552 people, with total area of 21.521 km2 (8.3093 mi2). It is the location of the district office, and can be considered as the southern part of the district.

Bang Ramat is one of the six khwaengs (subdistricts) of Taling Chan District in Bangkok's Thonburi area. Bang Ramat has 23 administrative villages.

Bang Chueak Nang is one of the six khwaengs (subdistricts) of Taling Chan District in Bangkok's Thonburi side. The subdistrict contained 12 administrative villages.

Bang Phrom is a khwaeng (subdistrict) of Taling Chan district, Bangkok's Thonburi side.

Charan Sanit Wong Road is a main road in Bangkok's Thonburi side, it is named in honour of Luang Charan Sanit Wong, the former Permanent Secretary, Ministry of Transport. Its name has been misspelled as จรัลสนิทวงศ์ in Thai according to the 1999 Royal Institute Dictionary.

Wat Puranawat is a private Buddhist temple in suburb Bangkok, situated on the bank of Khlong Maha Sawat in the area of Sala Thammasop in Thawi Watthana District, considered as a temple on the northwesternmost of Bangkok. Across Khlong Maha Sawat is the area of Tambon Sala Klang, Bang Kruai District of Nonthaburi Province, while Tambon Salaya, Phutthamonthon District of Nakhon Pathom Province is not far from here.

Chimphli, also written as Chim Phli, is a khwaeng (sub-district) of Taling Chan District, Thonburi side of Bangkok.

Khlong Khwang is a khwaeng (sub-district) of Phasi Charoen District, Thonburi side of Bangkok.