Thonburi railway station may refer to these stations in Thailand: 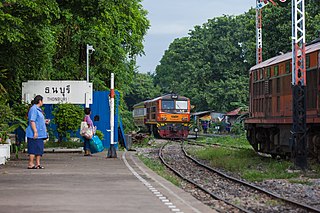 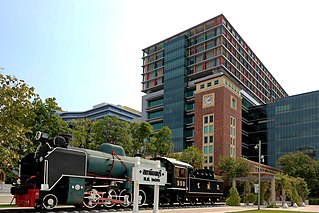 Krung Thonburi station is a BTS Skytrain station, on the Silom Line in Khlong San District, Bangkok, Thailand. The station is on Krung Thon Buri Road. It was the first station of Bangkok's rapid transit system on the Chao Phraya River's west bank. 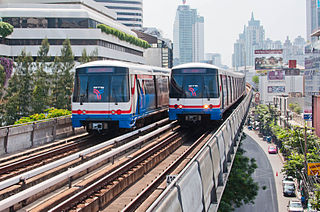 The Bangkok Mass Transit System, commonly known as the BTS or the Skytrain, is an elevated rapid transit system in Bangkok, Thailand. It is operated by Bangkok Mass Transit System PCL (BTSC), a subsidiary of BTS Group Holdings, under a concession granted by the Bangkok Metropolitan Administration (BMA). The system consists of 43 stations along two lines: the Sukhumvit Line running northwards and eastwards, terminating at Mo Chit and Kheha respectively, and the Silom Line which serves Silom and Sathon Roads, the central business district of Bangkok, terminating at National Stadium and Bang Wa. The lines interchange at Siam station and have a combined route length of 48.7 kilometers (30.3 mi). The system is formally known as "the Elevated Train in Commemoration of HM the King's 6th Cycle Birthday".

Khlong San is one of the 50 districts (khet) of Bangkok, Thailand. On the west bank of Chao Phraya River, its neighboring districts across the river are Phra Nakhon, Samphanthawong, Bang Rak, Sathon, and Bang Kho Laem. On the west side of the river, the only land neighbor is Thon Buri District. 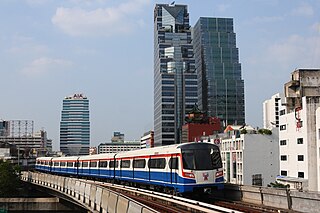 Silom Line or formally The Elevated Train in Commemoration of HM the King's 6th Cycle Birthday 2nd line is a route of the BTS Skytrain in Bangkok, Thailand. It runs eastward from the National Stadium Station in Pathum Wan District over Rama I Road and interchanges with the Sukhumvit Line at Siam BTS Station, then turns southward, following Ratchadamri, Si Lom, Narathiwat Ratchanakharin and Sathon Roads to Taksin Bridge where it crosses the Chao Phraya River and terminates at Bang Wa Station in Phasi Charoen District. The line is represented on the official BTS map in dark green. 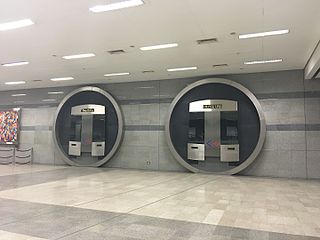 The MRT Orange Line is one of the planned rapid transit lines of the Mass Rapid Transit Authority of Thailand (MRTA) in the Bangkok Metropolitan Area, Thailand. 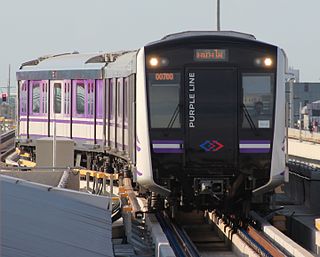 Wongwian Yai, also spelled "Wong Wian Yai" or "Wongwien Yai", is a large roundabout in Thonburi, on the west bank of the Chao Phraya River in Bangkok, Thailand, where the statue of King Taksin is situated. It is in the Thon Buri District and Khlong San District in the centre of Bangkok, at the intersection of Prajadhipok/Inthara Phithak/Lat Ya/Somdet Phra Chao Taksin Roads. Nearby is Wongwian Yai Station, a historical commuter railway terminal to Mahachai and Mae Khlong, a southwestern suburb of Bangkok. 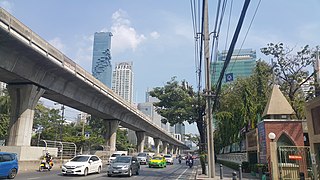 Sathon Road is a major road that passes through Sathon district in central Bangkok, Thailand. It is an important transportation link between Phra Nakhon and Thonburi sides of Bangkok. 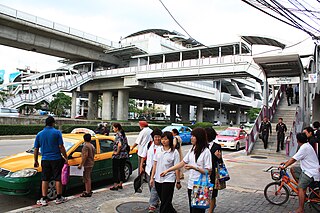 Wongwian Yai station is a BTS skytrain station, on the Silom Line in Khlong San District, Bangkok, Thailand. The station is on Krung Thon Buri Road to the west of Taksin intersection.

Saphan Taksin station is a BTS skytrain station, on the Silom Line in Sathon District, Bangkok, Thailand. The station is located at the entry ramp of Taksin Bridge, below Sathon Road, to the east of the Chao Phraya River. It is the only rapid transit station in Bangkok which can transfer to a river pier for the crossing-river ferry to Thonburi and the Chao Phraya Express Boat service. That makes the station popular for both daily passengers and tourists sightseeing by river boats to historical area such as Wat Arun, Wat Pho and Sanam Luang.

Phaya Thai station is a rapid transit station on the Airport Rail Link and Sukhumvit Line in Ratchathewi District, Bangkok, Thailand. The Airport Rail Link station is located above the mainline Eastern Railway at a level crossing on Phaya Thai Road. There is a direct interchange to the BTS Sukhumvit Line. The station is surrounded by the government buildings, office towers and comdominiums along Phaya Thai and Si Ayutthaya Road. Suan Pakkad Palace, Traditional Thai antiques Museum and Gallery is nearby to the east of the station. 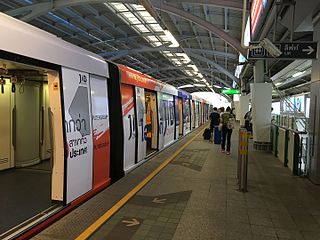 Bearing station is a BTS skytrain station, on the Sukhumvit Line in Bang Na District, Bangkok, Thailand. The station is located on Sukhumvit Road at Soi Bearing, the last point of the BTS system in Bangkok Metropolitan Administration area, before passing the border pole to Samrong Nuea Town in Samut Prakan Province.

Rail transport was introduced to Bangkok in 1893, and the national railway network was developed during the 20th century. Rapid transit in Bangkok includes several rail lines: the BTS Skytrain, MRT and Airport Rail Link. 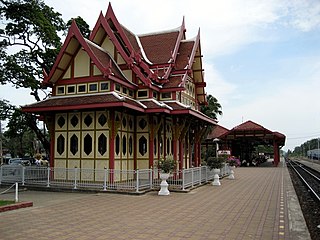 The Gold Line is a planned people mover line, part of Bangkok's rapid transit system. Not part of the current MRT Master Plan, the line was proposed in July 2015. It was approved by the cabinet in 2016. The first phase is expected to open in 2020, with a further phase opening in 2023. It will connect Krung Thonburi BTS station with Prajadhipok Road in Thon Buri District, a total of 2.68 km. Development of the line is the responsibility of the Bangkok Metropolitan Administration, with a budget of 3.8 billion Thai baht, though it is expected that mall developer Siam Piwat will fund the development cost as it will connect to the company's new Iconsiam complex. In future the line could be extended to Asiatique The Riverfront, a large waterfront retail and entertainment complex. The environmental impact assessment was to have been completed in December 2016.

Sathorn Pier, with designated pier code/number CEN, is a major pier on the Chao Phraya River located beneath the Taksin Bridge, Sathorn Road in Bangkok, Thailand. 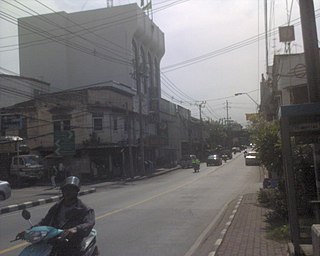 Talat Phlu or Talad Phlu is a community and marketplace by the Khlong Bangkok Yai in the Talat Phlu and Bang Yi Ruea Subdistricts, Thon Buri District, Thonburi side of Bangkok.

Wang Lang Market is a daily market in Bangkok Noi district next to Siriraj Hospital and Chao Phraya river in Bangkok's Thonburi side.