Thondan (transl. Votary) is a 2017 Indian Tamil vigilante drama film written and directed by Samuthirakani. The film features Samuthirakani himself in the lead role, with Vikranth, Sunaina, Arthana Binu, Gouri Nair, and Namo Narayana amongst others in pivotal roles. The music is composed by Justin Prabhakaran with editing by A. L. Ramesh. The venture began production in December 2016 and had a theatrical release on 26 May 2017.

Narayanan (Namo Narayana) is the son of Central Minister Pandiyanar (G. Gnanasambandam). Narayanan uses his father's name to make money by corruption, much to the latter's dismay. One day, some goons try to kill a man in daylight, as instructed by Narayanan. The man is lying in a pool of blood, and a local person witnesses this and informs this to the ambulance. The ambulance driver is Maha Vishnu (Samuthirakani), a kindhearted man who has never let anyone whom he has taken in his ambulance die. Vishnu admits the man in the hospital, and he is saved. Narayanan is angry with Vishnu for saving his enemy, for which he replies that saving the lives of people is his duty.

Vishnu is married to Bagalamugi (Sunaina). He has a father (Vela Ramamoorthy) and sister Mahishasuramardini (Arthana Binu). The latter is stalked by Vicky (Vikranth), a drunkard and jobless youth who happens to be a friend of Vishnu. Vishnu convinces Vicky to reform and attend the medical technician course. Vicky completes it successfully and saves people's lives, earning the love of Vishnu and his family. Mahi has a friend named Gowri (Gouri Nair), who is stalked by Narayanan's brother Chinna Pandi (Soundararaja), and she beats him in a bus. Insulted by this, Chinna Pandi beats Gowri up with a wooden log. Enraged, Mahi and the students kill him. Vishnu arrives with his ambulance to admit Chinna Pandi to the hospital. To avoid traffic, he takes the outer bypass, infuriating Narayanan. Chinna Pandi succumbs to the injury. Narayanan blames Vishnu for this and beats him up, but he is saved by the public. Narayanan vows to kill Vishnu.

Vishnu gets mad after his father loses his hearing ability and his wife suffers a miscarriage. Deeply saddened by this, he confronts Narayanan, who pleads that he is innocent. Vishnu believes that being a common man, he cannot do anything against a powerful man who has political support. Narayanan bribes Inspector Uthaman (Anil Murali) and three government officials and has them under his control. Vishnu is helped by Sub-Inspector Rahman (Poraali Dileepan). Vishnu plans to destroy Narayanan and bring him to justice. He gathers all the details of the properties owned by Narayanan and a video footage of him insulting Uthaman and the government officials while bribing from Narayanan's auditor, who helps Vishnu because he once saved his wife's life. Vishnu realizes that Narayanan used Pandiyanar's name to earn huge amounts of money and buy so many properties by corruption. Vishnu sends the evidences them to IT, Vigilance, and other departments. He also sends the video footage to Uthaman's wife and the government officials' wives, who lose respect among their family. Uthaman and the government officials decide to stop supporting Narayanan for his further actions.

The IT department raids Narayanan's house, confiscates all of his belongings, and arrests him. Narayanan tries to escape but meets with an accident. While he is struggling, Vishnu comes with his ambulance and saves him.

In May 2016, Samuthirakani revealed that he was set to work with Jayam Ravi for the second time after Nimirndhu Nil on a project titled Thondan, using a script that he had initially written for Sasikumar. He stated that production would begin by the end of the year, with Allari Naresh also selected to play a role. [1] [2] However Jayam Ravi's busy schedule during 2016 and 2017 meant that the pair could not eventually work together. [3]

The film re-materialised during December 2016, with Vikranth signed on to portray the role originally assigned to Naresh, while Samuthirakani himself would play the lead role. Vikranth revealed that he would star in the project alongside commitments to work in Suseenthiran's ventures Vennila Kabaddi Kuzhu 2 and Nenjil Thunivirundhal . Samuthirakani stated the film would be about "simple men, their lives, problems and pain" and "these are people who provide a service to the society; they might earn a less salaries, but they definitely get more satisfaction out of life". [4] He added that the film would tackle several social issues in India including demonetisation, corruption in politics, the farmers' plight, jallikattu and the harassment of women. [5] [6] Production began during early December 2016, with Sunaina added to the cast after Samuthirakani was impressed with her performance in Neerparavai (2012). [7] [8]

The film's music was composed by Justin Prabhakaran and featured five songs. The album was released on 9 April 2017 through Yuvan Shankar Raja's U1 Records label.

The film had a theatrical release across Tamil Nadu on 26 May 2017, alongside Radha Mohan's Brindavanam (2017 film) , and earned mixed to negative reviews. The satellite rights of the film were sold to Zee Tamil. [9] Baradwaj Rangan of Film Companion wrote "All of which would be okay...if there was a grain of good filmmaking. But the utterly generic bring-down-the-bad-guy story is preposterous, and scenes go on and on." [10]

Anupama Subramaniam of the Deccan Chronicle wrote Thondan is an "interesting film sans entertainment values" and "all is well and good, but things do become a bit self-righteous and annoying when a fictional film begins to give you lessons on ethics and morality". [11] India Today's review stated that "Thondan is Samuthirakani's TED Talk in Tamil that runs for more than two hours", adding that it is "an uninteresting social commentary". [12] On a positive note, film critic Santhosh Mathevan wrote, "Kani documents a lot of true events, and he also comes out with some real time and cinematic references in his screenplay." He also criticised, "Usually, the mercury level of preaching would always touch the peak of thermometer in every of Kani's movie. But, Thondan has let the mercury bulb burst, as the film seems to be a 138 minute-tight-pack of loads of moral values to teach." [13] Sify.com stated the film was "filled with a plethora of messages in an over preachy tone". [14] A critic from The New Indian Express wrote the film was "a basket of moral lectures", concluding "Thondan is what you feared would happen once Appa (2016) did as well as it did". [15] Baradwaj Rangan rated the film 1 out of 5 and wrote, "As expected, actor and director Samuthirakani, delivers yet another sermon disguised as a movie". [16] The film took a lukewarm opening at the Chennai box office and fared averagely commercially.[ citation needed ] 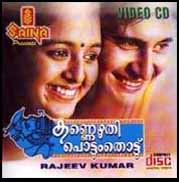 Uthaman is a 2001 Indian Malayalam-language drama film directed by Anil - Babu and written by T. A. Razzaq, starring Jayaram, Sindhu Menon, and Siddique. The music was composed by Johnson.

Neerparavai is a 2012 Tamil-language drama film written and directed by Seenu Ramasamy and produced by Udhayanidhi Stalin. It stars Vishnu and Sunaina in the lead roles, and Nandita Das plays the older version of the latter's character. Saranya Ponvannan, Samuthirakani, Varsha Ashwathi, and Anupama Kumar play supporting roles. The music is composed by N. R. Raghunanthan with cinematography by Balasubramaniem and editing by Kasi Viswanathan. The film released on 30 November 2012 to positive reviews from critics.

Nimirndhu Nil is a 2014 Indian Tamil-language action drama film written and directed by Samuthirakani featuring Jayam Ravi and Amala Paul in the lead roles. It was produced by KS Sreenivasan's Vaasan Visual Ventures. The film's soundtrack and background score were composed by G. V. Prakash Kumar. Ravi played a revolutionist for a social cause. This is the first time, Jayam Ravi played a double role in his career. The film, which was simultaneously made in Telugu as Janda Pai Kapiraju with Nani in place of Jayam Ravi, released on 8 March 2014 and received mostly positive reviews. 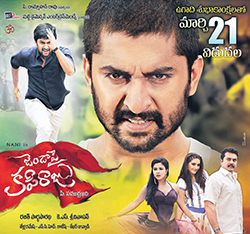 Janda Pai Kapiraju is a 2015, Indian, Telugu-language political action drama film. Janda Pai Kapiraju was written and directed by Samuthirakani, and features Nani and Amala Paul in lead roles. The film's soundtrack and score were composed by G. V. Prakash Kumar. A second version was concurrently made in the Tamil language, titled Nimirndhu Nil, with Jayam Ravi in the main role. While the Tamil version with Jayam Ravi released in 2014, the Telugu version was released on March 21, 2015. Nani played a double role for the first time in his career. Despite already having a Tamil version, the Telugu version was dubbed and released in Tamil as Velan Ettuthikkum in 2018. 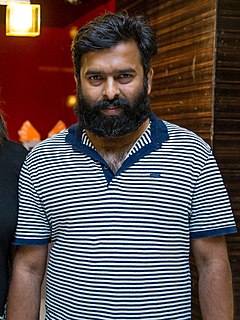 Namo Narayana is an Indian actor who has worked in Tamil films. He made a breakthrough as an actor with his performances in Naadodigal (2009) and Komban (2015).

Bogan is a 2017 Indian Tamil-language action thriller film written and directed by Lakshman and produced by Prabhu Deva and Ganesh. The film stars Jayam Ravi, Hansika and Arvind Swamy in the lead roles. Featuring music composed by D. Imman, the film began production during March 2016 and released on 2 February 2017. Jayam Ravi and Arvind Swamy portrayed both the protagonists and antagonists respectively. 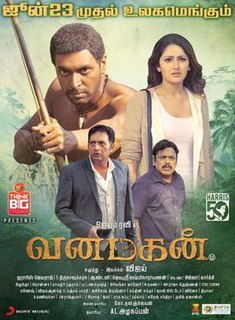 Vanamagan is a 2017 Indian Tamil-language action adventure film written and directed by A. L. Vijay. The film stars Jayam Ravi and Sayyeshaa, with Prakash Raj, Thambi Ramaiah, and Varun in supporting roles. Harris Jayaraj is the music composer. The venture began production in September 2016. The film was released on 23 June 2017.Tamil film Vanamagan is all about the jungle boy story who is encountering city life after come out of forest life.

Thondan is a 1995 Tamil political drama film directed by Karvannan. The film features Murali and Rohini in the lead roles, with Anandaraj, Manivannan, Srividya, Vinodhini, Vadivukkarasi, Gnanavel and S. Ramadoss playing supporting roles. The film, produced by R. K. Film Makers Circuit, had musical score by Rajan Sarma and was released on 10 March 1995.

Peechaankai is a 2017 Indian Tamil Dark comedy film written and directed by Ashok. It became the first Indian film to deal with a rare disease of alien hand syndrome as its main plot point. It starred R. S. Karthik in the lead role while Anjali Rao, M. S. Bhaskar, Vivek Prasanna, and K. S. G. Venkatesh played other pivotal roles. Featuring music composed by Balamurali Balu and cinematography by Gautham Rajendran, the film was co-produced PG Media Works and had a theatrical release on 15 June 2017.

Nenjil Thunivirundhal is a 2017 Indian bilingual action drama film written and directed by Suseenthiran. Shot in Tamil and Telugu languages, the film features Sundeep Kishan, Mehreen Pirzada, Vikranth, and Shathiga in the lead roles, with Soori, Satya, and Harish Uthaman also in pivotal roles. Featuring music composed by D. Imman, the venture began production in December 2016 and was released on 10 November 2017. The film is Dubbed into Hindi as C/o Surya in 2018. 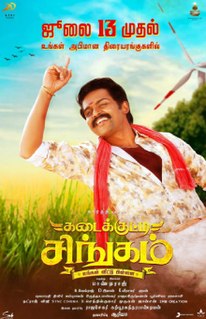 Kadaikutty Singam is a 2018 Indian Tamil-language action drama film written and directed by Pandiraj and produced by Suriya for, his studio 2D Entertainment. The film stars Karthi, Sayyeshaa and Arthana Binu with a supporting cast including Sathyaraj The film featured music composed by D. Imman and cinematography by Velraj. The film was released on 13 July 2018 along with its Telugu dubbed version, Chinna Babu.

Arthana Binu is an Indian film actress, who works in Tamil, Malayalam, and Telugu film industry. Hailing from Thiruvananthapuram, Kerala, she made her debut in the 2016 Telugu film Seethamma Andalu Ramayya Sitralu. She is known for films such as Mudhugauv (2016), Thondan (2017), Semma (2018) and Kadaikutty Singam (2018). She is the daughter of actor Vijayakumar, who was active during the early 1990s.

Naadodigal 2 is a 2020 Indian Tamil-language drama film written and directed by Samuthirakani and produced by S Nandagopal under the banner of Madras Enterprises. It stars Sasikumar and Anjali. The film released on 31 January 2020. The film is a namesake sequel to the highly successful 2009 film Nadodigal.