Thong Lo (Thai : ทองหล่อ, RTGS: Thong Lo, pronounced  [tʰɔ̄ːŋ lɔ̀ː] ; also spelled Thong Lor), officially named Soi Sukhumvit 55, is a road and neighbourhood in Watthana District, Bangkok, Thailand. Thong Lo literally translates as 'molten gold'. [1] Its name comes from that of a naval officer, Thonglo Khamhiran, a member of the Khana Ratsadon (People's Party), a 1932 revolutionary group. He owned land and houses in the area. In pre-World War II Thailand, the area along Sukhumvit Road to the Bang Na District was suburban Bangkok and quasi-rural. Much of the area was occupied by the navy. [2]

Thong Lo runs from the Thong Lo BTS Station on Sukhumvit Road north to Phetchaburi Road. Originally housing car dealerships and dowdy shops, during the early-2000s it became increasingly trendy. [3] [4] New boutiques, restaurants, and cocktail bars sprang up, [5] creating a demand for new condominiums in the area, partially driven by a significant Japanese expat community. [6] In 2017, to the dismay of many, the Bangkok Metropolitan Administration (BMA) cracked down on the neighbourhood's street food vendors. [7] 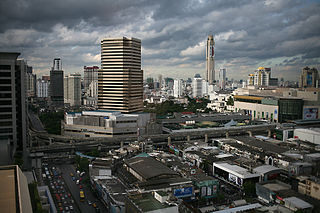 Pathum Wan is one of the 50 districts (khet) of Bangkok, Thailand. The district is bounded by seven other districts : Ratchathewi, Watthana, Khlong Toei, Sathon, Bang Rak, Pom Prap Sattru Phai, and Dusit. 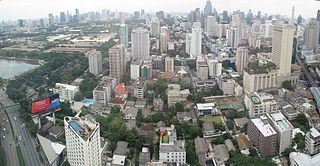 Khlong Toei is a district in central Bangkok, long known for its slum. It is bordered by the Chao Phraya River and contains major port facilities. It is also the site of a major market, the Khlong Toei Market. 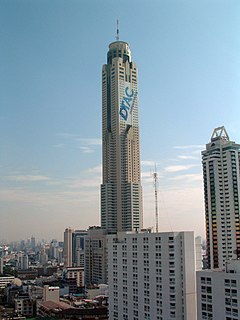 Ratchathewi is a district in central Bangkok, Thailand. It is also name of a BTS Skytrain station. 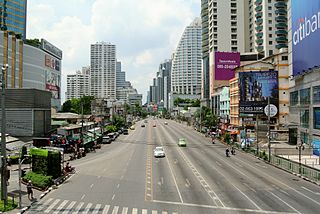 MBK Center, also known as Mahboonkrong, is a large shopping mall in Bangkok, Thailand. At eight storeys, the center contains around 2,000 shops, restaurants and service outlets, including the 4-storey Tokyu department store.

Sukhumvit Road, or Thailand Route 3, is a major road in Thailand, and a major surface road of Bangkok and other cities. It follows a coastal route from Bangkok to Khlong Yai District, Trat border to Koh Kong, Cambodia 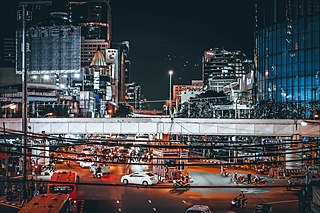 Pratunam, written as Pratu Nam, is an intersection and neighborhood in Bangkok. It is located in Thanon Phaya Thai sub-district, Ratchathewi district. It is the intersection of Phetchaburi, Ratchadamri and Ratchaprarop roads. The next intersection on Ratchaprarop side is Makkasan.

Ratchathewi station is a BTS skytrain station, on the Sukhumvit Line in Ratchathewi District, Bangkok, Thailand. The station is located on Phaya Thai Road to the south of Ratchathewi intersection, about 10 minutes walk to Pantip Plaza on the way to Pratunam market. The station is also linked by a skybridge to Asia Hotel, and by escalators and stairs to a recently created area known as Co-Co Walk that houses several relatively low cost restaurants and bars used mostly by the locals, some "antique" shops, and the one remaining software vendor displaced from Hollywood Street that occupied the rear of the site that formerly hosted a theatre/cimema; Co-Co Walk adjoins the Hollywood Arcade that appears to no longer function as retail premises. 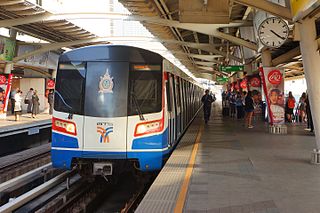 National Stadium station is a BTS Skytrain station on the Silom Line in Pathum Wan District, Bangkok, Thailand. The station is located on Rama I Road to the west of Pathum Wan intersection, where the National Stadium, MBK Center, Siam Discovery Center, Bangkok Art and Culture Centre and Siam Square are situated and all linked to the station by skybridge. It is also in walking distance to Siam Center and Siam Paragon, which are located at Siam station. Jim Thompson House, a popular Thai silk museum of Jim Thompson, is just opposite the station in Soi Kasemsan 2.

Nana station is a BTS skytrain station, on the Sukhumvit Line in Khlong Toei District, Bangkok, Thailand. The station is on Sukhumvit Road at Soi Sukhumvit 9, east of Nana intersection. It is surrounded by a variety of classes of hotels and facilities for foreign tourists. The red-light district and the Nana Plaza area are also in walking distance from the station.

Thong Lo station is a BTS Skytrain station, on the Sukhumvit Line in Khlong Toei District, Bangkok, Thailand. The station opened in December 1999 along with the rest of the Sukhumvit Line's first phase. The elevated station is located on Sukhumvit Road at Soi Thong Lo. The neighborhood is known for having a large number of expatriate Japanese residents, and the area and its nearby side-streets are known for trendy bars and restaurants.

Khlong Tan is an intersection including neighbourhood in Bangkok's Suan Luang sub-district, Suan Luang district. It's crossroads of Phetchaburi, Ramkhamhaeng, Phatthanakan, and Sukhumvit 71 roads. It's considered to be the end of Phetchaburi and the beginning of Ramkhamhaeng roads.

Khlong Maha Nak is a khlong (canal) in Bangkok and considered one of Bangkok's oldest canals. It starts from Khlong Rop Krung in the area of Mahakan Fort and Wat Saket's Golden Mount and continues to the east as far as ends at the intersection with Khlong Saen Saep in Ban Khrua neighbourhood, tote distance 1.3 km. 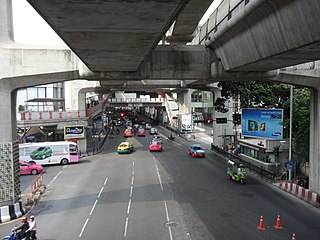 Chaloem Phao is a junction in the area of Bangkok's Pathum Wan sub-district, Pathum Wan district. It is a three-way junction of Rama I with Henri Dunant roads and considered as the end of Henry Dunant road. Including a junction between Pathum Wan and Ratchaprasong intersections on Rama I road side. 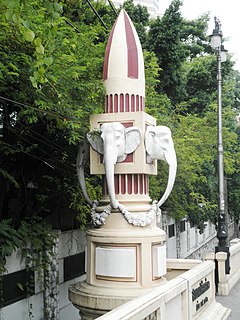 Chaloem La 56 Bridge or popularly known as Hua Chang Bridge. It's an one bridge in Bangkok's Thanon Phetchaburi sub-district, Ratchathewi district and Wang Mai sub-district, Pathum Wan district, it across Khlong Saen Saep on Phaya Thai road. The place adjacent to the bridge-foot in Pathum Wan side is Sa Pathum Palace (วังสระปทุม), which was once the palace of Queen Savang Vadhana, who was King Bhumibol Adulyadej 's grandmother and Maha Vajiralongkorn 's great-grandmother. Currently is the resident of Princess Maha Chakri Sirindhorn.

Ekkamai Road, officially named Soi Sukhumvit 63, is a soi in the form of road, and the name of the surrounding its location in Bangkok.

Wang Mai is one of the four khwaengs (subdistricts) of Pathum Wan District, Bangkok. 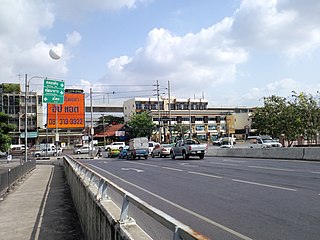 Template:Attached KML/Thong Lo
KML is from Wikidata
This page is based on this Wikipedia article
Text is available under the CC BY-SA 4.0 license; additional terms may apply.
Images, videos and audio are available under their respective licenses.