Tong Sala (Thai : ท้องศาลา; RTGS: thong sala) is the principal town and administrative centre of Ko Pha Ngan, an island in the Gulf of Thailand. While Haad Rin hosts the Full Moon Party and attracts many of the island's visitors, Thong Sala is mostly used by tourists as a ferry terminal and jumping off point.

The port area has three main piers, one of which is able to handle medium- to large-sized container and passenger craft. The others accommodate smaller passenger and dive boats that serve the islands of Ko Pha Ngan, Ko Samui, and Ko Tao, and the mainland ports of Surat Thani and Chumphon.

Surat Thani, often shortened to Surat, is the largest of the southern provinces (changwat) of Thailand. It lies on the western shore of the Gulf of Thailand. Surat Thani means 'city of good people', a title given to the city by King Vajiravudh.

Chumphon is a southern province (changwat) of Thailand on the Gulf of Thailand. Neighbouring provinces are Prachuap Khiri Khan, Surat Thani, and Ranong. To the west it borders the Burmese province of Tanintharyi.

Sala or SALA may refer to:

Ko Samui is an island and city off the east coast of the Kra Isthmus, Thailand. Geographically in the Chumphon Archipelago, it is part of Surat Thani Province, though as of 2012, Ko Samui was granted municipal status and thus is now locally self-governing. Ko Samui is Thailand's second-largest island after Phuket, with an area of 228.7 km2, a population of over 63,000 and a hotel occupancy rate of 73% as the number of visitors increases. Abundant tourist resources, sandy beaches, coral reefs, and coconut trees are present on the island. 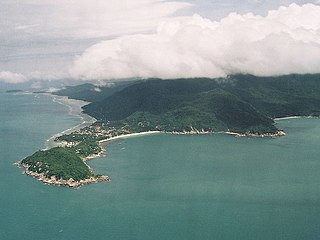 Ko Tao is an island in Thailand and is part of the Chumphon Archipelago on the western shore of the Gulf of Thailand. It covers an area of about 21 km2. Administratively it is a subdistrict (tambon) of Ko Pha-ngan District (amphoe) of Surat Thani Province. As of 2006 its official population was 1,382. The main settlement is Ban Mae Hat.

The Full Moon Party is an all-night beach party that originated Hat Rin on the island of Ko Pha-ngan, Thailand on the night of, before or after every full moon. It is mostly attended by tourists.

PHA may refer to:

Bandon Bay is a bay in the Gulf of Thailand in Surat Thani Province, extending from the Sui cape in Chaiya District in the northwest to Kanchanadit District to the east. The total coastline is about 100 km. The bay is dominated by the estuary of the rivers Tapi and Phum Duang. The islands of Ko Samui, Ko Pha Ngan and Ko Tao enclose the bay on its eastern side.

Samui International Airport, also known as Ko Samui Airport or Koh Samui Airport, is a privately owned airport on the island of Ko Samui in Thailand. The airport is roughly 2 km north of the main city and largest resort centre on the island, Chaweng. It was built by Bangkok Airways. Construction began in 1982 and the airport was officially opened in April 1989.

The Half Moon Festival is an outdoor dance music (rave) event on the island of Ko Pha Ngan, Thailand held on the half moon, one week before and one week after the full moon. The promoters mainly employ local DJs using CD decks rather than vinyl. Various guest DJs play unannounced sets but the event does not book big name stars.

Ko Phra Thong is an island in Khura Buri District, Phang Nga Province, southern Thailand on the Andaman Sea. It has an area of 88 km2 and is separated from the mainland by a seven-metre-deep (23 ft) canal. The nearest town is Khura Buri, on the mainland about 10 km east.

Ko Pha-ngan Airport is an unfinished airport that was under construction in 2012-2015 on Ko Pha-ngan, Surat Thani Province, Thailand. The airport was being built by Kan Air, a domestic Thai airline, who were reportedly spending 700-900 million baht. Kan Air planned to introduce flights to Ko Pha-ngan's neighboring islands, Ko Samui and Ko Tao, as well as three 80-minute flights daily to and from Bangkok's Don Mueang Airport. Construction was suspended indefinitely due to alleged violations of the law.

Ko Phaluai or "เกาะพะลวย" in Thai, is the biggest island in the Mu Ko Ang Thong island group. It is inhabited by sea-gypsies who still earn a living from fishing.

Mu Ko Samui is a group of islands in the Gulf of Thailand. Together they have a population of 78,000 (2012). The islands are split between 3 different districts :