Thongchai Sitsongpeenong (Thai: ธงชัย ศิษย์สองพี่น้อง, Thai pronunciation: [tʰōŋ.tɕʰchāj sìtsɔ̌ːŋpʰîːnɔ́ːŋ] ; born January 22, 1996) is a Thai Muay Thai kickboxer. As of June 2016, he is ranked #9 at Rajadamnern Stadium at 160 lbs and #10 by World Boxing Council Muaythai at 160 lbs. [1] Thongchai has also previously competed for Glory from 2016 to 2018, where he most notably participated in the 2018 Glory Welterweight Contender Tournament.

Thongchai Sitsongpeenong was born as Saranon Glompan in Nakhon Ratchasima in the northerneastern (Isan) region of Thailand on January 22, 1996. He had his first fight at the age of 11 in 2007. [2]

On June 7, 2013, Thongchai won the vacant Lumpinee Stadium title in the welterweight division (147 lbs). [3] His first fight outside of Thailand was on November 23, 2013, in Macau, China, against Eleha Nohi at 70 kg. Thongchai won after a three-round decision. His second fight outside of Thailand was on December 13, 2013, in Russia against Khayal Dzaniev. Dzaniev is one of the few fighters who have beaten Buakaw Banchamek, which happened in the TopKing World Series Semifinal Tournament. Thongchai defeated Dzaniev via technical knock out in the third round and won the WMC Intercontintental Super Welterweight Championship title at 154 lb. [4] [5]

Thongchai lost in a highly controversial bout against Tobby Smith on January 3, 2014. It has been argued that he won rounds one and two, and it being a three-round fight, he should have won the bout. [6] His next international fight was in France on February 8, 2014. He won against Fabio Pinca after five rounds. He broke Pinca's arm, causing Pinca to not be able to fight for 15 months.[ citation needed ] Thongchai went on to fight at the IFMA World Championships tournament in Malaysia from May 4–9, 2014. He won gold in the 71 kg division. [7] Thongchai next fought Vong Noy in Cambodia, winning by second-round knock out on August 3, 2014.

Yodsanklai Fairtex a.k.a. Yod is a retired Thai Muay Thai kickboxer. He is a former WBC Muay Thai World Super welterweight champion at 154 lbs, and a two-time Lumpinee Stadium champion in the 112 and 147 lb weight classes. He is also the first champion of The Contender Asia. He was nicknamed "The Boxing Computer" by Thai sports newspapers as a testament to his perfect fighting technique. 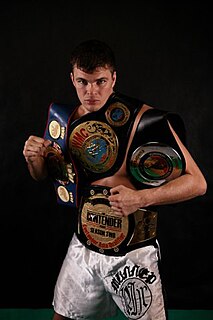 Fabio Pinca is an Italian-French Muay Thai kickboxer and mixed martial artist. Pinca is currently signed to ONE Championship. In 2010, Pinca became the first winner of the annual Thai Fight tournament.

Sitthichai Sitsongpeenong is a Thai Muay Thai kickboxer who is currently signed to ONE Championship. Sitthichai is a former Lumpinee Stadium Welterweight Champion and Glory Lightweight Champion. Combat Press ranks him as the #3 lightweight kickboxer in the world.

Damien Alamos is a French Muay Thai kickboxer. He is the WPMF European and World Muaythai Champion & Lumpinee stadium champion 140 lb. For his professional fighting career he is jointly managed by Numnoi and Rodrigo Alamos. He is a member of Singpatong Sitnumnoi and Impacts Bordeaux Clubs.

Singmanee Kaewsamrit is a Thai Muay Thai kickboxer. He is the former Rajadamnern Stadium Champion, WMC and WPMF Welterweight Champion. He is also the 2012 Thai Fight 67 kg Champion and Isuzu Cup 22 Champion.

Jordan Watson is an English Muay Thai kickboxer who competes in the middleweight division. A powerful kicker, Watson began training in Muay Thai at six years old with Richard Smith at Bad Company, Leeds, UK and first came to prominence when he reached the final of the K-1 UK MAX Tournament 2007 Pain & Glory at nineteen. He won the ISKA World Super Welterweight Muay Thai Championship in 2010 and then found further recognition the following year by finishing as runner-up on The Challenger Muay Thai reality television show. He began fighting for Glory in 2012. He is the first ever and current Yokkao -70 kg champion. 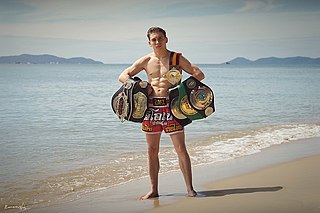 Manaowan Sitsongpeenong is a Thai Muay Thai kickboxer. As of June 2016, he is the current Rajadamnern Stadium welterweight champion. He is ranked #3 by Lumpinee Stadium at Welterweight (147 lb), #8 by Thailand PAT at welterweight, and #3 by World Boxing Council Muaythai at welterweight.

Jimmy Vienot is a French Muay Thai kickboxer who is the reigning SUPERKOMBAT World Middleweight Champion. He is a former Lumpinee Stadium and Arena Fight champion.

Capitan Petchyindee Academy is a Thai Muay Thai fighter, currently signed with ONE Championship. He is the former ONE Bantamweight Kickboxing World Champion and Lumpinee Stadium Super Welterweight champion. 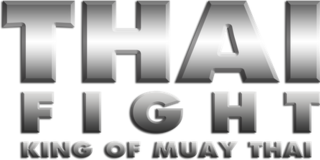 Thai Fight is a Muay Thai promotion based in Bangkok, Thailand, which hosts events worldwide and all across Thailand. Thai Fight events are produced in conjunction with the Tourism Authority of Thailand. The inaugural tournament took place on August 29, 2010, and the promotion has since featured notable fighters such as Sudsakorn Sor Klinmee, Saiyok Pumpanmuang, Yodsanklai Fairtex, Buakaw Banchamek and Saenchai.