Mysore Srinivas (17 April 1943 – 16 October 1995), known by his stage name Thoogudeepa Srinivas was an Indian actor who appeared in Kannada films and is remembered for his portrayal of negative-shaded characters. He is the father of actor, Darshan and film director Dinakar. [1]

Srinivas was born to Muniswami and Parvathamma in 1943 as their fourth son. He had eight siblings. He lost his parents at a young age. Right from his childhood days, Srinivas was interested in theatre and cinema and was a regular participant in his school and college plays. During one of these plays, he caught the eye of another theatre artist M. P. Shankar, whom he later went on to star with in many Kannada films. Srinivas then became a regular member of Shankar's camp and had to discontinue his education during his pursuing of a Bachelor of Science from St. Philomena's College in Mysore. [2]

Srinivas made his debut in film in 1966 with K. S. L. Swamy's Kannada film Thoogudeepa . He was from then on referred to as Thoogudeepa Srinivas. He went on to appear in many other successful films such as Mayor Muthanna , Bangaarada Panjara , Gandhada Gudi , Kalla Kulla , Vasantha Lakshmi and Sahasa Simha . He appeared in many films as a villain with Rajkumar as the lead actor and his "partners in crime" included other popular actors such as Vajramuni, Doddanna and Dheerendra Gopal. [3]

Srinivas appeared in an important role in the 1984 film Ramapurada Ravana. He received appreciation for his roles in films such as Sipayi Ramu , Giri Kanye and Bhagyavantharu . [3]

Srinivas married Meena on 15 November 1973 in Ponnampet, Kodagu. The couple have three children together — Darshan, Dinakar and Divya. Darshan is a popular actor in Kannada cinema and Dinakar is a film director. [3]

Having been suffering from diabetes and kidney ailment, Srinivas was given a kidney by his wife Meena. However, he died due to a massive heart attack on 16 October 1995, aged 52. [3]

Sadananda Sagar, better known by his stage name Vajramuni, was an Indian actor who appeared in Kannada films. He portrayed negative characters during most of his career and was considered one of Kannada cinema's finest actors. Over his career, he came to be known for his "thundering voice and sterling performance[s]" that earned him the epithets, Nata Bhairava and Nata Bhayankara. 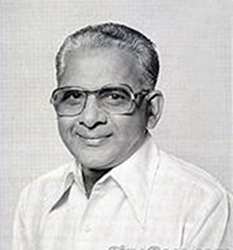 Veeramachineni Madhusudhana Rao was an Indian film director, producer, and screenwriter, known for his works predominantly in Telugu cinema. He is popularly known as ‘Victory’ Madhusudhana Rao. He directed nearly 70 films, including musical hits such as Annapurna (1960), Aradhana (1962), Aathma Balam (1964), Zamindar (1965), Antastulu (1965), Aatmiyulu (1969), Krishnaveni (1974) and produced Swati Kiranam (1992). In 1965 he received the National Film Award for directing Antastulu. Madhusudhan Rao died on 11 January 2012 at the age of 94.

Darshan Thoogudeepa known mononymously as Darshan is an Indian actor, producer, and distributor who works predominantly in Kannada films. One of the leading contemporary actors of Kannada cinema, Darshan established the production house Thoogudeepa Productions in 2006. Its first production was Jothe Jotheyali, with Darshan in a special appearance. 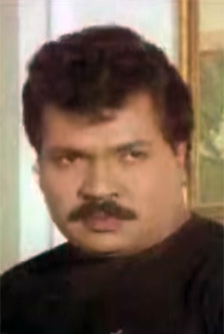 Tiger Prabhakar, also known as Kannada Prabhakar, was an Indian actor known for his works predominantly in Kannada and Telugu cinema, with a few Malayalam, Tamil and Bollywood films. 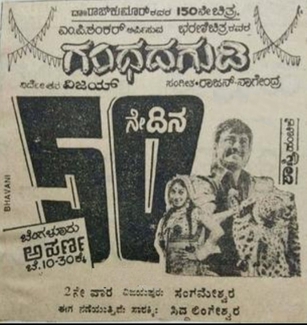 Gandhada Gudi is a 1973 Indian Kannada-language action drama film directed by Vijay and produced by M. P. Shankar. Rajkumar in his 150th film portrays an honest forest officer Kumar while Vishnuvardhan plays the antagonist, Anand, though his character is redeemed at the end of the film. Kalpana, M. P. Shankar, Narasimharaju and Balakrishna performed other important roles.

Karaganahalli Subbaraya Ashwathanarayana was an Indian veteran actor who appeared in Kannada films He appeared in over 370 films during his five-decade-long career. His only memorial in the whole of Karnataka, India is in the Kengeri satellite town, Bengaluru. Memorial name - "K. S. Ashwath Memorial Children's Park". 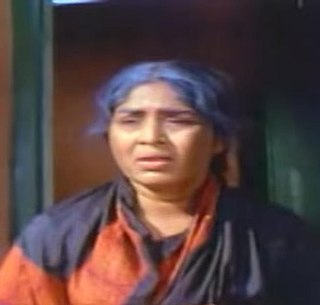 Advani Lakshmi Devi is a retired Indian actress known for her work in Kannada cinema. She has played a variety of roles such as heroine, vamp, mother, grandmother in hundreds of Kannada movies over the last 50 years. Her role in films Gandhada Gudi (1973) and Sri Srinivasa Kalyana (1974) as mother is much remembered. She is the mother of veteran actress Roopadevi who acted in many Kannada movies with Rajkumar such as Haalu Jenu (1982), Samayada Gombe (1984) and Yarivanu (1984). Rajkumar holds the distinction of having played hero and son's role with her. Rajkumar] holds the distinction of having played the hero to both Roopadevi and her mother Advani Lakshmi Devi. Lakshmi Devi recently honoured with Rajkumar lifetime achievement award 2016 by the state government of Karnataka.

B. Vijaya Reddy, better known as Vijay Reddy or Vijay, was an Indian film director who worked primarily in Kannada cinema with over 50 movies to his credit. His debut directorial venture was Rangamahal Rahasya (1970). He was known for his collaborations with leading Kannada actor Rajkumar for movies like Gandhada Gudi (1973), Mayura (1975), Naa Ninna Mareyalare (1976) and Sanaadi Appanna (1977) which are considered among the classic movies of Kannada cinema.

J. C. Ramaswamy, known by his screen name Shakti Prasad, was an Indian actor who appeared in Kannada films in mostly villainous roles. In a career spanning close to 20 years, he appeared in over 200 films including landmark films such as Immadi Pulikeshi (1967) and Antha (1981).

Thayige Thakka Maga is a 1978 Indian Kannada-language sports action film directed by V. Somashekhar and produced by Parvathamma Rajkumar. It is based on the story written by Anjaneya Pushpanand.

Huliya Haalina Mevu is a 1979 Indian Kannada-language epic historical drama film directed by Vijay, based on a novel of the same name by Bharathisutha starring Rajkumar as Chengumani, the commander-in-chief of the 18th-century Kingdom of Coorg. Jayachitra and Jayapradha feature in pivotal roles. The movie was dubbed in Telugu as Prachanda Bheri. This was also Rajkumar's first cinemascope movie.

Basappa Jaya, commonly known as B. Jaya, was an Indian actress, known for her work in Kannada cinema. She acted in over 200 films. For her performance in the movie Gowdru, Jaya won the Karnataka State Film Award for Best Supporting Actress in 2004-05.

S. Shivaram, popularly known simply as Shivaram or Shivaramanna, was an Indian actor, producer and director whose Kannada cinema career has spanned six decades. He has played roles including lead hero performances, character roles, comedic roles, as well as supporting parts. He teamed up with his elder brother, S. Ramanathan and produced several films under the name Rashi Brothers apart from directing Hrudaya Sangama in 1972. They together produced movies directed by Puttanna Kanagal like Gejje Pooje and Upasane. They also produced Dr. Rajkumar 's 175th movie Nanobba Kalla and the Tamil movie Dharma Durai starring Rajinikanth which was a remake of the 1989 Kannada movie Deva. The brothers together produced few Bollywood films as well including the 1985 movie Geraftaar which is known to be the only Indian movie to star three stalwarts - Amitabh Bachchan, Kamal Haasan and Rajinikanth - in a single movie. As an actor, Shivaram has the distinction of working with many stalwart directors out of which his association with Puttanna Kanagal is much remembered. He has acted in all the seven Kannada movies directed by Singeetam Srinivasa Rao starring Rajkumar.

Mysore Srikantayya Umesh, popularly known as M. S. Umesh or simply Umesh, is an Indian actor whose Kannada cinema career has spanned six decades. After having featured in several stage shows as an actor in his childhood, he was hired for the lead character in the film Makkala Rajya (1960). Since then, he has acted in over 350 feature films renowned for his unique dialogue delivery, facial expressions and comedy timing.

Mavinakere Srinivasayyangar Cheluvayyangar better known by his stage name Sampath was an Indian actor in the Kannada film industry. Some of the notable films of Sampath as an actor include Gandhada Gudi (1973), Sri Srinivasa Kalyana (1974), Bhakta Kumbara (1974) and Eradu Kanasu (1974). 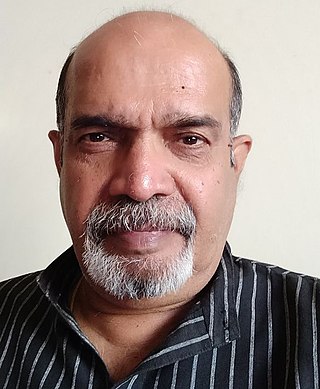 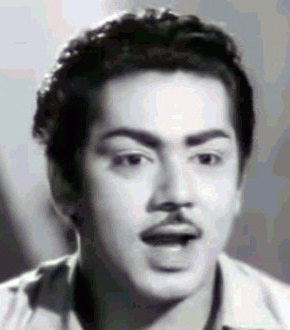