Thookupalam is a developing commercial centre about 10 kilometres (6.2 mi) from the Kerala-Tamil Nadu border in the Idukki district of Kerala, India. It lies on the banks of river Kallar and is one of the main tourist hubs between Thekkady, Munnar and Ramakkalmedu.

Thookupalam is one of the spices trading centres in Idukki district. The place is situated on the Thekkady-Munnar road near the Ramakkalmedu windmill project. The main crops cultivated in the area include cardamom, black pepper, Cocoa, and coffee. Thookkupalam is well known for the Sunday market of vegetables, fruits, domestic animals, and many agricultural products. This is one of the developing villages of Idukki.[ citation needed ]

The main mode of transport in Thookkupalam is road. Kerala State RTC and Tamil Nadu STC services are also available 24/7.

Idukki (ഇടുക്കി)is a district in the Indian state of Kerala. It was constituted on 26 January 1972, by splitting the district of Kottayam into two parts. Its division was earlier headquartered at Kottayam city, but moved to Painavu in June 1976. Idukki district lies amid the Western Ghats of Kerala.

Thekkady(Idukki district) is a town near Periyar National Park, an important tourist attraction in the Kerala state of India.

The Cardamom Hills or Yela Mala are mountain range of southern India and part of the southern Western Ghats located in southeast Kerala and southwest Tamil Nadu in India. Their name comes from the cardamom spice grown in much of the hills' cool elevation, which also supports pepper and coffee. The Western Ghats and Periyar Sub-Cluster including the Cardamom Hills, are UNESCO World Heritage Sites.

Kumily is the largest Gram Panchayat in the Idukki district of Kerala. It is a town in Cardamom Hills near Thekkady and Periyar Tiger Reserve. Kumily is gateway town into Kerala from Tamil Nadu.

Ramakkalmedu is a hill station and a hamlet in Idukki district in the Indian state of Kerala. The place is noted for its panoramic beauty and numerous windmills. 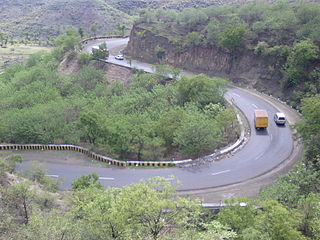 Mangala Devi Kannagi temple is a historic temple located in the Idukki District of Kerala bordering Tamil Nadu, about 7 km from Pazhiyankudi in Theni district and 15 km from Thekkady in Idukki district. Cheran Chenguttuvan, the king of ancient Tamilakam, had erected the temple for Kannagi around 2000 years back at Vannathipara and called it 'Kannagi Kottam' or 'Mangaladevi Kannagi temple' and performed regular pujas. It sits at an altitude of about 1,337 m (4,386 ft) above the mean sea level. It is surrounded by lush greenery and is closed throughout the year except during the Chitra Pournami festival. At other times tourists can still view it by getting a special letter from the forest ranger. The view from the temple premises is spectacular and one can see part of eastern ghats and some villages from adjacent state of Tamil Nadu.

Pampadumpara is a village in Idukki district in the Indian state of Kerala. Cardamom Research Institute is located in Pampadumpara.

Adimali is a town in the Idukki district of Kerala, India. National Highway 185 is a highway in India running from Adimali to Kumily through Kattappana and ends in Adoor in Kerala. Adimaly is located on the National Highway 49, now NH 85, known as Kochi-Dhanushkodi National Highway (India) connecting Kochi and Madurai, India. From Adimaly, it is only 27 kilometers to Munnar, which is a famous hill station. The waterfalls Cheeyappara, Adimali waterfalls and Valara are located nearby. Pepper cultivation is the main agricultural activity of this place. The Ponmudi Dam was constructed in 1963 across the Panniar river, nearly 15 km southeast of Adimali, on the way to Rajakkad. Adimali is known for its proximity to Munnar and natural environment. Adimali has almost all the basic facilities like roads, educational institutions and hospitals.

Kundala Valley Railway was the first monorail system in India, later converted to a 2 ft narrow-gauge railway, that operated in Kundala Valley, Munnar of Idukki district in Kerala, India. 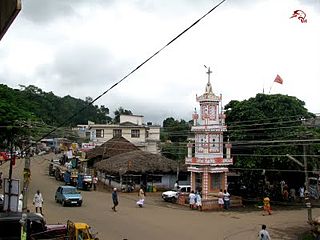 Anakkara is a geographic area of around 50 square kilometres that spans across Vandanmettu, Chakkupallam Village Panchayats in the Udumbanchola Thaluk of Idukki District. Anakkara is the administrative capital of Chakkupallam Gram Panchayat and Anakkara Revenue Village. Situated at about 18 Kilometers from Thekkady wildlife sanctuary on the Kumily-Munnar state highway, Anakkara is a fast-growing tourist destination for its unique spice gardens and many picnic spots in and around. It is one of the 36 distinct places identified by Government of India and United Nations Development Programme for exploring and promoting the unique tourism potential of these places.

Parunthumpara is a village in the Indian state of Kerala's Idukki District. It is a small scenic location near Wagamon en route to Peerumedu. Parunthin Para also known as 'Parunthumpara'. From here, the Makarajyothi of Sabarimala is visible. The main attractions of Parunthumpara are Suicide Point and Tagor Head. A nearby tourist spot is Thekkady.

Bodimettu is a locality in Theni district in the state of Tamil Nadu in India, near the border with Kerala. It is 10 km from Poopara on the way to Bodinayakkanur by the side of National Highway 85, which runs from Dhanushkkodi to Kochi. Bodimettu is the main cardamom-growing area of Tamil Nadu. It is close to famous tourist destinations such as Munnar, Marayur, Thekkady, Kodaikanal, Anayirangal Dam.

Vagavurrai or Vaguvarrai is a village in Idukki district of Kerala, India. It is located 24 kilometers north of Munnar and 18 kilometer from Marayur on SH 17 connecting Munnar with Udumalpet, Tamil Nadu.Geographically, it is located approximately 25 km from Munnar, and is flanked by the Madupatty Dam on one side and the highest peak of South India – Aneimudi on the other side. The accessibility is by road through the 9th mile – Udumalpet road leading to Coimbatore on one side and Munnar – Top Station road on the other side. This entire area has a wealth of flora and fauna. Exotic Rhododendrons are found in parts of Vaguvurrai and Gundumallay, and the much sought after Kurinji in Vagavurrai. It is also known for its rich wildlife. Elephants, Bisons, Mouse deers, Sambars and Porcupines are found in abundance.

The KDHP Tea Museum is an industry and history museum situated in Munnar, a town in the Idukki district of Kerala in South India. Tata Tea Museum is its official name, but it's also known as Nalluthanni Estate where it is located, or Kannan Devan Hills Plantation (KDHP) Tea Museum.

Puliyanmala is a village in Idukki district of Kerala state, India. The places intersects SH-19 (Munnar-Kumily) and SH-33 (Thodupuzha-Puliyanmala), which are the two important state highways in the district. It comes under the premises of Kattappana municipality and belongs to the newly formed Idukki constituency.

Vandaravu is the highest peak in the Palani hills in Tamil Nadu, India.