Thoondil (transl. Bait) is a 2008 Tamil language romantic drama film written and directed by K. S. Adhiyaman. The film stars Shaam, Sandhya, and Divya Spandana, while Vivek and Revathi play supporting roles. The music was composed by Abhishek Ray with editing done by V. M. Udhayashankar and cinematography by T. Kaviyarasu. The film released on 22 February 2008 and was opened to poor reviews.

The film tries to work on the old saying "hell hath no fury like a woman scorned". Divya (Divya Spandana) is an upcoming model in London who meets Sriram (Shaam), an IT guy, and falls in love. They sleep together, but Sriram leaves her when Divya's boss tells him to stay out of her life if he wants to see her make it big. Divya feels betrayed when she finds out but does not know that her boss is the reason behind the split. Divya does achieve her dream and becomes a top model but is on a revenge romp to wreak havoc in Sriram's happily married life to Anjali (Sandhya). Anjali is a cheerful girl whose only sorrow in life is that she does not have a child, and when she finally has a baby after four years of marriage to Sriram, Divya comes into her life and takes the baby away, saying that it is her baby. What happens after that forms the climax of the movie.

The film was shot extensively in London. Shaam, Sandhya and Divya were cast in the lead. Vivek was signed to play a comical role. Abhishek Ray composed the songs for this film. [4]

Soundtrack was composed by Abhishek Ray. [5]

The Hindu noted that "Generally in a story of thrill and supsence, you would expect verve and vibrancy. But in 'Thoondil' things take their own sweet time to move - hence the momentum is missing". [2] Rediff wrote "All in all, a supposedly suspense-filled love story that is anything but". [1] Sify wrote "The basic problem with the film is that the story is clichéd, unimaginative and amateurish to say the least. The presentation is old fashioned and the dialogues are banal." [6]

Thamizhan is a 2002 Indian Tamil-language courtroom drama film directed by debutant Majith and produced by G. Venkateswaran. The film stars Vijay and Priyanka Chopra. Chopra made her debut in cinema through this film. Revathi, Nassar, Ashish Vidyarthi and Vivek also play pivotal roles in the film, while the film's score and soundtrack were composed by D. Imman. The story involves solving several corruption cases by a lawyer named Surya in the process fighting against a criminal boss and finally making Indian law basics available as a free book to common people. The film released on 12 April 2002. It received mixed reviews but was a commercial success at the box office and its satellite rights were bought by Sun TV for a good price. 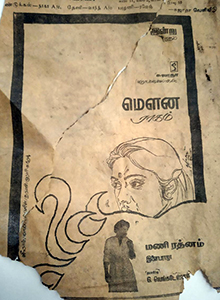 Mouna Ragam is a 1986 Indian Tamil-language romantic drama film written and directed by Mani Ratnam, and produced by G. Venkateswaran. The film stars Mohan and Revathi, with Karthik, V. K. Ramasamy, Ra. Sankaran, Bhaskar, Kanchana, Vani, Kalaiselvi and Sonia in supporting roles. It narrates the life of Divya (Revathi), a free-spirited college girl who is forced into an arranged marriage with Chandrakumar (Mohan) by her father (Sankaran). Divya, secretly mourning her former lover Manohar (Karthik) who was shot dead, did not want to be married. The story follows Divya's inner conflict between holding onto her past and coming to terms with the present and making a life with Chandrakumar.

Shamshuddin Ibrahim, known professionally as Shaam, is an Indian actor and model who mainly appears Tamil and Telugu-language films. Starting his career as a professional model, he soon made his acting debut in the film 12B (2001). He further appeared in lead roles in films such as Lesa Lesa (2003), Iyarkai (2003), and Ullam Ketkumae (2005). He garnered acclaim for his role in the Telugu film Kick (2009), which earned him the name Kick Shaam. Kick enabled Shaam to star in other prominent Telugu films such as Race Gurram (2014). After a hiatus, he returned to Tamil cinema with 6 (2013) and Purampokku Engira Podhuvudamai (2015). 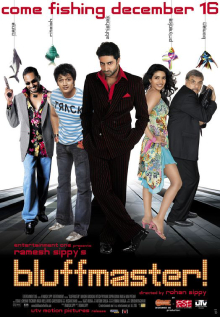 Bluffmaster! is a 2005 Indian Hindi-language crime comedy film directed by Rohan Sippy and produced by Ramesh Sippy. The film stars Abhishek Bachchan, Riteish Deshmukh, Priyanka Chopra, Sanjay Mishra, Boman Irani and Nana Patekar. It is an adaptation of the 2000 Argentine film Nine Queens. It follows a conman who gets dumped by his girlfriend and after realising he is suffering from a severe illness, decides to help a new apprentice before dying.

Netru, Indru, Naalai was a series of musical theatre performances, that were held in Chennai, India by Indian film director Mani Ratnam. Choreography for the show was provided by Kala and Brinda. There were unconfirmed reports of close to 12,000 people attending the show.

Divya Spandana, better known by her screen name Ramya, is a former Indian actress and politician. She served as the Member of Parliament in the Lok Sabha from Mandya, Karnataka. She primarily works in Kannada, alongside Tamil language films. Ramya is the recipient of two Filmfare Awards South, an Udaya Award, and a Karnataka State Film Award. 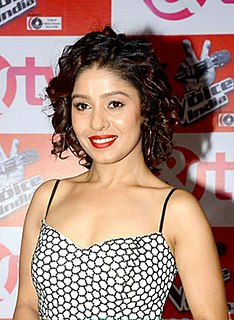 Sunidhi Chauhan is an Indian playback singer. Born in Delhi, she began performing in local gatherings at the age of 5 and made her career debut at the age of 13, with the film Shastra (1996). During the year, she won the first singing reality show titled Meri Awaz Suno and rose to prominence after recording "Ruki Ruki Si Zindagi" from Mast (1999). It won her Filmfare RD Burman Award for New Music Talent and was nominated for the Best Female Playback Singer. She is known for her versatility as a vocalist. 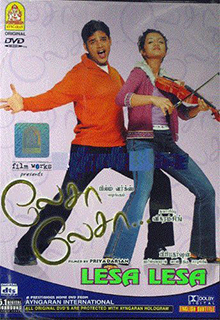 Lesa Lesa..., also referred to as Laysa Laysa, is a 2003 Indian Tamil-language film directed by Priyadarshan and produced by Vikram Singh, who previously produced 12B. The film stars Shaam and Trisha, while Vivek, Radharavi and Sreenivasan play supporting roles. Madhavan appears in a guest appearance. Cinematography is handled by Tirru, while the film's score and soundtrack were composed by Harris Jayaraj. The film is a remake of the 1998 Malayalam film Summer in Bethlehem, which was co-written by Ranjith and Venu Nagavally.

Final Cut of Director is a 2016 Indian Hindi-language action thriller film that was written and directed by Bharathiraja. The film stars Nana Patekar and Arjun Sarja, with Rukmini Vijayakumar, Kajal Aggarwal, Niyamat Khan, Vatsal Sheth, and Mushtaq Khan in supporting roles. Himesh Reshammiya composed the music and cinematography was done by B. Kannan. The film was released on 21 October 2016.

Yai! Nee Romba Azhaga Irukey! is a 2002 Indian Tamil-language romantic musical film written and directed by Vasanth. Starring Shaam, Sneha, Rajiv Krishna and Jaya Re.The film narrates the story of four youngsters who go through unrequited love and respond differently to their failures. Produced by GV Films, it had a theatrical release on 13 July 2002 across Tamil Nadu. 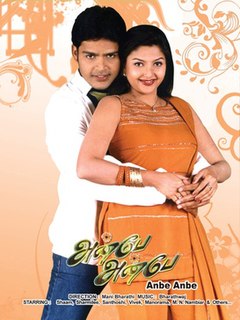 Anbe Anbe is a 2003 Indian Tamil-language romantic drama film directed by Mani Bharathi. The film stars Shaam and Sharmili, while an ensemble supporting cast includes Vivek, Yugendran, M. N. Nambiar, Manorama, and Santhoshi. The music was composed by Bharathwaj. The film released on 1 May 2003 and opened to mixed reviews from critics. The film's plot is loosely based on the Hindi film Hum Aapke Hain Koun..! (1994). 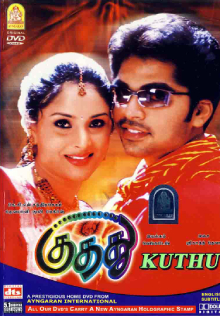 Kuthu (transl. Punch) is a 2004 Indian Tamil-language masala film directed by A. Venkatesh, starring Silambarasan, Ramya and Kalabhavan Mani. It is a remake of the 2003 Telugu film Dil. The music was composed by Srikanth Deva.

Nee Venunda Chellam is a 2006 Indian Tamil-language action romance film, written and directed by L. Venkatesan, starring Ramesh, Gajala and Namitha in lead roles, with Thilakan, Vivek and Vincent Asokan playing supporting roles. The music is composed by Dhina and was a success. The film was a below average from film critics and audience. 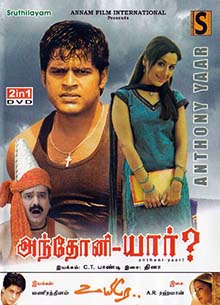 Anthony Yaar? is a 2009 Tamil language film directed by C. T. Pandi. The film stars Shaam and Mallika Kapoor, while Lal, Vivek, and Rajesh play supporting roles. The music was composed by Dhina, and the film released on 31 July 2009. 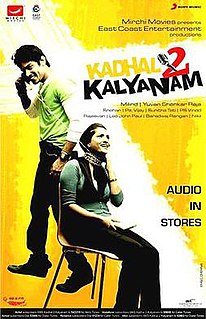 Kadhal 2 Kalyanam is an unreleased Tamil-language romantic comedy film directed by newcomer Milind Rau that stars debutante Sathya, brother of Tamil actor Arya, and Divya Spandana, whilst, Jayashree, Nagendra Prasad, Kasthuri and Anuja Iyer play pivotal roles. Noted film critic Baradwaj Rangan had written the dialogues, while Yuvan Shankar Raja composed the film's score and soundtrack. The cinematography and editing were handled by P. S. Vinod and Leo John Paul, respectively. Pre-production works began by mid-2008, while the filming continued for over one year, being completed by July 2010. The film was jointly produced by Mirchi Movies and East Coast Entertainment, who are now not in the film-making business. Hence the movie remains unreleased.

Thambikku Indha Ooru is a 2010 Indian Tamil-language masala film directed by Badri. It stars Bharath, Sana Khan, Prabhu, Vivek, Madalsa Sharma, and Ranjith. The music was composed by Dharan Kumar with cinematography by Saalai Sahadevan and editing by S. Surajkavee. The film was released on 5 March 2010 to negative reviews and was declared a box office bomb. 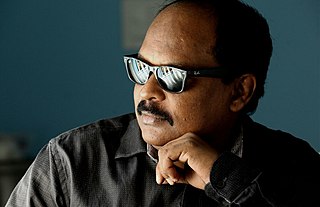 Sakalakala Vallavan is a 2015 Tamil-language comedy film written and directed by Suraj. The film stars Jayam Ravi, Trisha and Anjali, while Prabhu and Soori appear in supporting roles and Vivek in a guest appearance. S. Thaman composed the film's music, while cinematography was by U. K. Senthil Kumar and editing by Selva RK. The film was released on 31 July 2015.

Gulaebaghavali is a 2018 Indian Tamil-language heist action comedy film written and directed by Kalyaan and produced by KJR Studios. The film stars Prabhu Deva and Hansika Motwani, with Revathi, Ramdoss, Anandaraj, and Yogi Babu in supporting roles. Featuring music by Vivek–Mervin and cinematography by R. S. Anandakumar, the film was released on 12 January 2018.