Thoonga Nagaram (transl. Sleepless city) is a 2011 Indian Tamil-language action thriller film written and directed by debutant Gaurav Narayanan, starring himself along with Vimal, Bharani, Nishanth, and Anjali. [1] The film, produced by Dhayanidhi Alagiri's Cloud Nine Movies, was shot entirely in Madurai, the city where the story takes place and which the title refers to. It was released on 4 February 2011 to relatively positive reviews and excellent box office collection. [2] [3] The film was dubbed in Telugu under the title Naluguru Snehithula Katha. [4]

Kannan (Vimal), Ayyavu (Bharani), Rajamani (Gaurav Narayanan), and Mariappan (Nishanth) are four friends who live their lives in their own way in Madurai. They are callous youths who go hammer and tongs to make both ends meet. Kannan, a wedding videographer, comes across his cousin Radha (Anjali), who is a compere in a local cable TV channel, and love blossoms between them. However, one event changes the course of their life. Kannan bashes a youth for taking obscene video clippings of a girl and blackmailing her with ulterior motive. The youth’s father (Kamala theatre owner Raju) finds out the men behind the attack on his son. He hatches a conspiracy and ensures that the friends themselves turn foes for each other. In the meantime, it is time for Kannan to tie the knot with Radha. Did the baddie succeed in his mission is the crux of the story.

The film was a commercial success grossing nearly $2million at the box office in 6 weeks. [5] 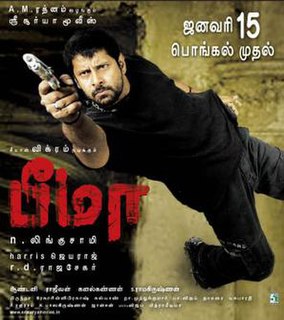 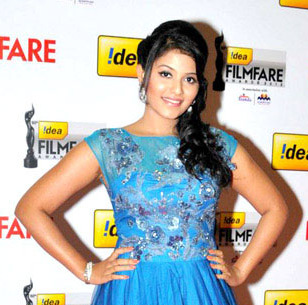 Anjali is an Indian actress and model who appears predominantly in Tamil and Telugu films. Following a stint in modelling, she was cast in starring roles in two Telugu productions; her debut film was the Telugu thriller film Photo (2006), before bagging a role and gaining attention in the film Kattradhu Thamizh (2007) with Jiiva. In 2010 and 2011, she won the Filmfare Award for Best Actress – Tamil, for her performances in Angaadi Theru and Engaeyum Eppothum respectively and the Tamil Nadu State Film Award for Angadi Theru, subsequently becoming recognised as one of the "finest young actors" in Tamil cinema, and noted for mostly playing "performance-oriented roles".

The Vijay Award for Best Actress is given by STAR Vijay as part of its annual Vijay Awards ceremony for Tamil (Kollywood) films. It was given from the second ceremony onwards.

Madurai Sambavam is a 2009 Tamil language action film written and directed by Youreka. It stars Harikumar, Anuya Bhagvath and Karthika in the lead roles, while Radha Ravi, Dhandapani, and Raj Kapoor play supporting roles. The music was composed by John Peter with cinematography by M. Sukumar and editing by P. Sai Suresh. The film released on 4 September 2009.

Renigunta is a 2009 Indian Tamil-language action film written and directed by R. Panneerselvam. The film stars Johnny and Sanusha in the lead roles, while Nishanth, Theepetti Ganesan, Thamizh, and Sandeep play supporting roles. The music was composed by Ganesh Raghavendra with cinematography by Shakthi and editing by Anthony. The film released on 4 December 2009 and was a sleeper hit success.

Cloud Nine Movies was an Indian film production and distribution company, based in Chennai. It is owned by Dayanidhi Azhagiri and Vivek Rathinavel and was founded in 2008 until 2014. He founded another new production company in 2013, Meeka Entertainment.

Mankatha (transl. Gambling) is a 2011 Indian Tamil-language action crime film written and directed by Venkat Prabhu. It stars Ajith Kumar in his 50th film, along with an ensemble cast including Arjun Sarja, Trisha Krishnan, Lakshmi Rai, Anjali, Andrea Jeremiah, Vaibhav Reddy, Premji Amaren, and Mahat Raghavendra. It was produced by Dhayanidhi Alagiri's Cloud Nine Movies while Yuvan Shankar Raja composed the musical score and soundtrack, with Sakthi Saravanan working as the cinematographer and the duo Praveen K. L. and N. B. Srikanth as editors. The story, set in Mumbai, revolves around a heist of cricket betting money, executed by a gang of four thieves, who are joined by a fifth unknown man, and its aftermath. 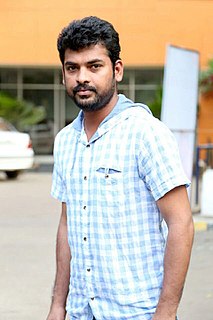 Vimal is an Indian actor who appears in Tamil films. Following credited appearances and a supporting role in the critically acclaimed movie Kanchivaram, he played the lead role in Pandiraj's critically acclaimed Pasanga (2009). Subsequently, he played lead roles in several low-budget productions. He established himself as a successful upcoming actor with Kalavani (2010), after that he has claimed his name with these movies Vaagai Sooda Vaa (2011), Kalakalappu (2012), Kedi Billa Killadi Ranga (2013), Manjapai (2014) and Mannar Vagaiyara (2018).

Sigaram Thodu is a 2014 Indian Tamil-language action thriller film written and directed by Gaurav Narayanan, which was also produced by UTV Motion Pictures. The film stars Vikram Prabhu, Sathyaraj, and Monal Gajjar while Sathish, Gaurav Narayanan, and Charandeep play supporting roles. It has cinematography by Vijay Ulaganath, editing by Praveen K. L. and music by D. Imman. The film was released on 12 September 2014 and become a commercial success.

Summa Nachunu Irukku is a 2013 Tamil-language comedy film directed by A. Venkatesh, who also starred in the film. The film stars Thaman Kumar, Vibha Natarajan and Archana Vishwanath along with an ensemble cast including Thambi Ramaiah, Srinivasan, Appukutty, and Erode Mahesh. The film, produced by B. Vimal, had musical score by Achu Rajamani and was released on 30 August 2013. The story of the film was inspired by the 1997 Malayalam film Chandralekha.

Ra Ra... Krishnayya is a 2014 Indian Telugu-language romantic comedy film written and directed by Mahesh P and produced by Vamsi Krishna Srinivas on the SVK Cinemas banner. It features Sundeep Kishan and Regina Cassandra in lead roles, while Jagapathi Babu, Kalyani, Tanikella Bharani, and Brahmaji play supporting roles. Achu Rajamani composed the music. Sai Sriram and Marthand K. Venkatesh handled the cinematography and editing of the film respectively. The movie is a remake of 2012 Hindi movie Tere Naal Love Ho Gaya which itself was based on the 1997 English film A Life Less Ordinary directed by Danny Boyle.

Gaurav Narayanan is an Indian film maker who predominantly works in Tamil cinema. He made his debut with the movie Thoonga Nagaram. 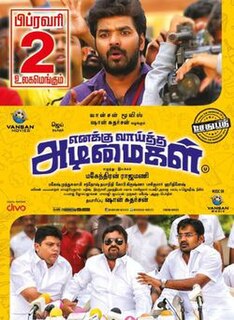 Enakku Vaaitha Adimaigal is a 2017 Indian Tamil-language comedy drama film written and directed by Mahendran Rajamani and produced by Shan Sutharsan. The film stars Jai and Pranitha, with Karunakaran, Kaali Venkat and Naveen George Thomas in supporting roles. Featuring music composed by Santhosh Dhayanidhi and cinematography by Mahesh Muthuswami, the film began production during June 2016 and was released on 2 February 2017.

Bharani is an Indian actor who has appeared in Tamil language films. After making his debut in Balaji Sakthivel's college drama Kalloori (2007), he made a breakthrough with his role as an eccentric Madurai-based youngster in Samuthirakani's buddy film Naadodigal (2009). He has since appeared in leading and supporting roles in films including Thoonga Nagaram (2011) and Netru Indru (2014). 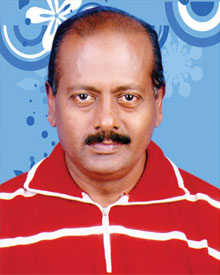 Vasu, popularly known as Halwa Vasu, was a comedian in the Tamil film industry in India. He worked in around 900 films.

Velvet Nagaram is a 2020 Indian Tamil language psychological thriller film written and directed by Manojkumar Natarajan on his directorial debut. The film casts Varalaxmi Sarathkumar in the lead role. The film is bankrolled by Arun Karthik's Makers Studios and Achu Rajamani and Saran Raghavan composes music for the film. The film had its theatrical release on 6 March 2020 and received mixed to negative reviews from critics.