Thoongathey Thambi Thoongathey (transl. Don't Sleep Brother, Don't Sleep) is a 1983 Indian Tamil-language masala film [1] directed by S. P. Muthuraman, starring Kamal Haasan in a double role, supported by Radha and Sulakshana. It was a blockbuster and completed a 275-day run at the box office.

Gopi is an unemployed graduate from a middle class society and Vinod is a rich graduate from high society returning from abroad after his father's death. To claim the property of Vinod, the estate manager with his mob guys assaults him and make him a drug addict by repeated injections administered by a fake doctor. Gopi's lover Padmini's father, a family friend of Vinod's father, together with Padmini, come to the estate on an excursion. Due to her curiosity, she sees Vinod and finds out that he is in a dangerous state of health due to the drug addiction. Padmini later learns that Gopi and Vinod are twins separated at birth. With the help of the house's servant, Padmini replaces Vinod with Gopi and sends him to his mother's house to save him. Gopi takes it upon himself to save the estate and properties from the hands of Vinuchakravarthy, his accomplice and his assistant.

After the success of Nadodi Mannan (1958), M. G. Ramachandran wanted his second directorial to be titled as Thoongathey Thambi Thoongathey named after the song from the film, however the project was shelved. [5] In 1983, AVM Productions launched a film with the same name starring Kamal Haasan. Kamal portrayed two distinct roles, and the cinematographer Babu used mask shots to differentiate the roles. [6]

The song "Vaanam Keezhe" took 17 days to be completed, this song was taken at a cost of ₹6 lakh (equivalent to ₹86 lakhorUS$110,000 in 2020). The song "Summa Nikkathinga" was shot at Vijaya Gardens. [6] [4] To shoot an expensive climax involving helicopter chase, makers took inspiration from the climax of Hindi film Dil Kaa Heera at the insistence of journalist Manian by taking long shots of bursting helicopter from that film and matched along with the actors. [6] [7]

The music was composed by Ilaiyaraaja and lyrics for all songs were written by Vaali. [8] For the Malayalam-dubbed version Vasantholsavam, all lyrics were written by Poovachal Khader, [9] and Rajashri wrote the lyrics for the Telugu-dubbed version Jalsa Rayudu. [10] The song "Naanaga Naanillai" was well received and it based on Chandrakauns raga which resembles Hindolam. [11] In early 2020, during the COVID-19 pandemic in India, a version of "Varuthu Varuthu" with rewritten lyrics spreading awareness about COVID-19, became viral. [12] 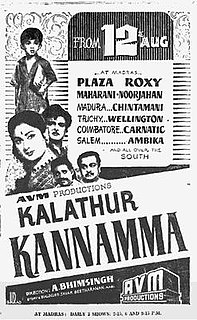 Kalathur Kannamma is a 1960 Indian Tamil-language romantic drama film directed by A. Bhimsingh and written by Javar Seetharaman. The film stars Gemini Ganesh, Savitri Ganesh and Kamal Haasan. It revolves around a couple — a wealthy zamindar's son and a farmer's daughter — who are separated due to circumstances, while their innocent son is forced to grow up in an orphanage.

Raja Paarvai is a 1981 Indian Tamil-language romance film directed by Singeetam Srinivasa Rao. The story was written by Kamal Haasan, for whom the film was his 100th as an actor and first as a producer. The score and soundtrack was composed by Ilaiyaraaja. Loosely based on the 1972 film Butterflies Are Free, it was simultaneously made and released as Amavasya Chandrudu in Telugu. Despite being a box office failure, the film received critical acclaim, and Haasan's performance won him the Filmfare Award for Best Tamil Actor.

Raja Chinna Roja is a 1989 Indian Tamil-language children's film, directed by S. P. Muthuraman, and produced by AVM Productions. The plot revolves around Raja (Rajinikanth), who arrives in the city to become an actor. In the process he meets his childhood friend and is forced to take care of his nieces and nephews.

Paayum Puli is a 1983 Tamil-language martial arts film directed by S. P. Muthuraman and written by Panchu Arunachalam. Produced by AVM Productions, the film stars Rajinikanth and Radha. Inspired by The 36th Chamber of Shaolin (1978), it revolves around a meek man who learns martial arts to seek vengeance from a gang of criminals who murdered his sister.

Nallavanukku Nallavan is a 1984 Indian Tamil-language action drama film, directed by S. P. Muthuraman and produced by AVM Productions. A remake of the 1983 Telugu film Dharmaatmudu, it stars Rajinikanth and Raadhika, with Karthik, Thulasi, V. K. Ramasamy, Major Sundarrajan, Y. G. Mahendran and Visu in supporting roles. The film revolves around a worker who is bequeathed his late boss's business, earning the wrath of the boss's son who believes he swindled his father's business.

Ninaithale Inikkum is a 1979 Indian Tamil-language romantic comedy film directed by K. Balachander starring Kamal Haasan, Rajinikanth, Jayaprada and Geetha. The story was written by Sujatha. The film was also simultaneously shot in Telugu as Andamaina Anubhavam. A large part of the film was shot in Singapore. The film was later dubbed in Hindi as Pyara Tarana. 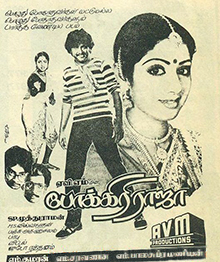 Pokkiri Raja is a 1982 Indian Tamil-language action comedy film directed by S. P. Muthuraman and written by Panchu Arunachalam. A remake of the Telugu film Chuttalunnaru Jagratha (1980), it stars Rajinikanth, Sridevi and Raadhika. The film revolves around a man who was framed for murder, and a lookalike who aids him in finding the true killers. It was released on 14 January 1982 and became a commercial success, running for over 100 days in theatres.

Aadu Puli Aattam is a 1977 Indian Tamil-language action film directed by S. P. Muthuraman, starring Kamal Haasan, Rajinikanth, Sangeetha and Sripriya. Later in 1978, S. P. Muthuraman remade the film in Telugu as Yetthuku Pai Yetthu, It was a partial remake of Aadu Puli Aattum. A few scenes were remade in Telugu with Telugu actors like Satyanarayana and Allu Ramalingaiah and the rest of the movie was dubbed. 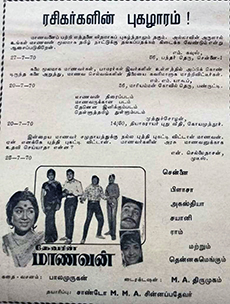 Maanavan (transl. Student) is a 1970 Tamil-language film directed by M. A. Thirumugam and produced by Sandow M. M. A. Chinnappa Thevar under Dhandayudhapani Films. The script were written by Balamurugan. The film starring Jaishankar and Muthuraman with Sowcar Janaki, Lakshmi, Nagesh and Sachu in supporting roles. Kamal Haasan appears only for a dance sequence along with Kutty Padmini. This was Haasan's first adult role after a seven-year hiatus. The film also marks the debut of many character actors and comedians like Pandu, Kathadi Ramamurthy among others. 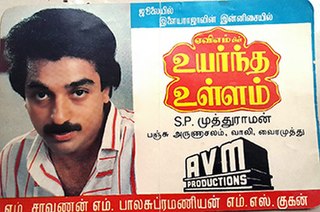 Oru Oodhappu Kan Simittugiradhu is a 1976 Indian Tamil language film directed by S. P. Muthuraman. The film stars Kamal Haasan and Sujatha. It is based on the novel of the same name written by Pushpa Thangadorai. The film was released on 4 June 1976.

Sakalakala Vallavan is a 1982 Indian Tamil-language masala film directed by S. P. Muthuraman and written by Panchu Arunachalam. The film stars Kamal Haasan, Ambika, Raveendran and Tulasi. Produced by AVM Productions, it revolves around a villager whose sister is raped by the village head's son when the former refuses to abide by his dictatorship. The villager vows to seek revenge and get his sister married to her rapist. 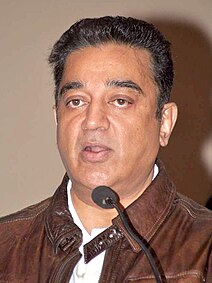 Kamal Haasan is an Indian film actor, screenwriter, film director, film producer, politician and choreographer who works primarily in Tamil cinema. He debuted as a child actor in the 1960 Tamil film Kalathur Kannamma, directed by A. Bhimsingh, which won him the President's Gold Medal. Since then he has acted in over 230 films in Tamil and other languages including Malayalam, Telugu, Hindi, Kannada, and Bengali. After a few projects as a child artist he took a break to continue his education. He later concentrated on dance choreography and worked as an assistant choreographer. During this time, he made uncredited appearances in a few films which he worked on. 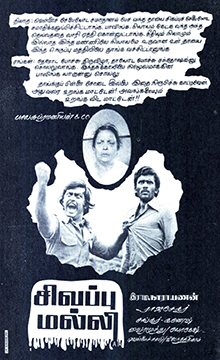 Sivappu Malli is a 1981 Indian Tamil-language film directed by Rama Narayanan for AVM Productions, starring Vijayakanth, Chandrasekhar, Shanthi Krishna, Aruna and S. S. Chandran. A remake of the Telugu film Erra Mallelu (1981), it revolves around two men starting a revolution against their village chiefs and the owner of a factory in the neighbouring village. The film was released on 15 August 1981.

Kuzhandaiyum Deivamum is a 1965 Indian Tamil-language children's film directed by the duo Krishnan–Panju. It is an adaptation of Disney's The Parent Trap (1961) which in turn was based on Erich Kästner's 1949 German novel Lisa and Lottie. The film tells the story of twin sisters attempting to reunite their separated parents.

Major Chandrakanth is a 1966 Indian Tamil-language drama film produced by A. V. Meiyappan and directed by K. Balachander. Based on his play of the same name, the film stars Major Sundarrajan, Nagesh, R. Muthuraman, A. V. M. Rajan and Jayalalithaa. It revolves around a retired and blind major who gives asylum to a fugitive wanted for committing murder, unaware that the victim was his younger son.

Deivapiravi is a 1960 Indian Tamil-language film, directed by Krishnan–Panju. The film stars Sivaji Ganesan, Padmini, S. S. Rajendran, K. A. Thangavelu and M. N. Rajam. The film had musical score by R. Sudarsanam. The film was dubbed and released in Telugu as Anumanam and released on 24 June 1961. At the 8th National Film Awards, the film won the All India Certificate of Merit for the Third Best Feature Film. It was remade the same year in Hindi as Bindiya, and in 1965 in Sinhala as Sekaya.