Thoppil Bhaskara Pillai, known as Thoppil Bhasi (8 April 1924 – 8 December 1992) was an Indian Malayalam-language playwright, screenwriter, and film director. He was associated with the communist movement in Kerala and his play Ningalenne Communistakki (You Made Me a Communist) is considered to be a groundbreaking event in the history of Malayalam theatre. [2]

Thoppil Bhaskara Pillai was born on 8 April 1924 at Vallikunnam in the erstwhile Kingdom of Travancore. Bhasi was the eldest son of Thoppil Parameshwaran Pillai and Nanikkutti Amma. [3]

His elementary education was at the SNDP Sanskrit School, and later on at the Sanskrit School, Changankulangara, from where he graduated in the Sanskrit Shastri course. Knowing fully well his desire to learn indigenous medicine, his father had him enrolled at the Ayurveda College, Thiruvananthapuram. It was here that he spearheaded the Students' Agitation that led to installing many of the facilities and rights enjoyed by the current generation of students at the College of Ayurveda. He also graduated securing the Top Rank in the Vaidya Kalanidhi Examination. [3]

His deep and enduring friendship with Kambisseri Karunakaran that extended through all spheres of their lives, also saw them at the forefront of some of the most significant political agitations in central Kerala. Once a staunch supporter and activist of the Indian Congress party, Thoppil Bhasi soon distanced himself from the same on matters of principles and found his direction in the neo movement of Communism via the Communist Party of India. He was associated with the communist movements that took place in Kerala during the 1940s and 1950s. Branded a Subversive and a Wanted Man by the government, he was on the run and went underground during the period of 1948–52, as a top priority suspect in the infamous Sooranad Incident, with a Rs 1000 bounty on his head. He was later acquitted, and went on to contest the first Panchayat elections in Kerala. He won, becoming the first president of the Vallikunnom panchayat. He was elected twice to the state assembly contesting the State elections, from Bharanikkavu in 1954 against Pushpathadom Raghavan a prominent congress leader and close associate to Jawaharlal Nehru and Pathanamthitta in 1957. [3]

Thoppil Bhasi never contested any more elections post his 1957 win, to devote his entire energies to this new direction his life has set course on – theatre. He had written his first One-act play Munnettam (The Advance) while on the run from the state, and based on the feedback received from the underground collective, had revisited, refined and re-energised the plot from a different perspective, creating the historical Ningalenne Communistaakki , both under his pseudonym Soman, for fear of revealing his true identity. The drama helped KPAC to become a force to reckon with on Kerala's theatrical arena. Later, he wrote scripts for 110 Malayalam films starting from 'Mudiyanaya Puthran' in 1961. [3]

His association with KPAC started with the staging of Ningalenne Communistaakki , and the entire proceedings from the show were donated towards the attorney fees needed to free the rest of accused in the Soornad Incident. He wrote the play Ningalenne Communistakki while in hiding in connection with the Sooranad case, which resulted from a revolt by agricultural workers against a landlord. Bhasi had to write the play under the name, Soman. Ningalenne Communistakki was first staged (under the banner of KPAC) in Chavara in Kollam district on 6 December 1952. He wrote 16 plays, for KPAC, each more spectacular and socially relevant than its predecessor and it used to be said in the 60s and 70s that there wasn't a day where at least one of his plays was not staged at any part of Kerala! Such was the influence of his creative power. From KPAC, he slowly moved to the film industry (some say it was a natural progression), authoring over 100 Screenplays and turned to directing 16 movies in Malayalam language, most of them box-office successes. [3]

Thoppil Bhasi's wedding with Amminiamma, the niece of R. Shankaranarayanan Thampi– ex-Speaker of the Kerala Legislative Assembly was solemnised when he was on the run, a wanted man for the government.[ citation needed ] In a moving tribute, aptly titled My Comrade, Amminiamma, amongst other nuggets, shares her husband's principle of simplicity and frugality in every aspect of his life. She recalls Udaya studio's Kunchacko asking her to buy him a new shirt as he was fed up of seeing Thoppil Bhasi in the same shirt every time.[ citation needed ] Thoppil Bhasi seems to have famously remarked, "Chackochen, I have 8 shirts of the same colour and type, and all eight have the same 'beedi-burn' patch at the left side of my breast-pocket". He was the quintessential socialist, according to her. Thoppil Bhasi has 4 sons – Ajayan, Soman, Rajan and Suresh, and a daughter Mala. Ajayan went on direct the award-winning Malayalam film Perumthachan in 1991. [3]

Thoppil Bhasi was prolific in terms of his creative output during his active years in theatre and movies. He authored 16 full-length plays, screenplays for over 100 movies, directed 16 movies and his autobiography was titled, Oliviley Ormakal. He was a regular contributor to the Janayugom Magazine and short stories to various publications which are yet to be collated and archived. [3]

Ajayan, also known as Thoppil Ajayan, was a Malayalam film director who is of note for his only feature film Perumthachan. The film received positive reviews from critics worldwide. For this film, Ajayan won the Indira Gandhi Award for Best Debut Film of a Director and Kerala State Film Award for Best Debut Director in 1990. The film also won the Kerala State Film Award for Best Popular Film in 1990 and was nominated for the Golden Leopard award at the Locarno International Film Festival in 1992.

Paravoor Govindan Devarajan (1927-2006), popularly known as G. Devarajan or Devarajan master, was an Indian music composer and Carnatic singer. He scored music for more than three hundred Malayalam films, many dramas, and twenty Tamil and four Kannada movies. His collaborations with Vayalar Ramavarma produced the golden era of Malayalam film music and many of his compositions remain ever green classics in Malayalam. His music in the Tamil film Annai Velankanni has received many accolades. Devarajan received Kerala Government's Best Music Director award five times, among other honours. In 2005, he was honoured with the J. C. Daniel Award, Kerala government's highest honour for contributions to Malayalam cinema.

Kayamkulam is a town and municipality in the Alappuzha district of Kerala, second biggest town in Alappuzha district. It is located on the western coast of India, and was an ancient maritime trading center. One of the largest thermal power plants in Kerala, the Rajiv Gandhi Combined Cycle Power Plant run by the NTPC, is situated at Haripad. Kayamkulam is part of the Karthikappally tehsil. Krishnapuram Palace is located nearby.

Nadan is a 2013 Malayalam drama film directed by Kamal and written by S. Suresh Babu. Jayaram and Remya Nambeeshan play the lead roles, while the rest of the cast are former theatre artists that include K. P. A. C. Lalitha, Joy Mathew, P. Balachandran, Hareesh Peradi and Sasi Kalinga. It was produced by Anilkumar Ambalakkara under the banner of Ambalakkara Global Films. Nadan features some famous scenes from the famous Kerala People's Arts Club dramas Ningalenne Communistakki and Mudiyanaya Puthran. 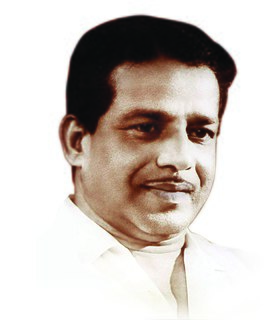 Sathyan was an Indian actor known for his work in Malayalam cinema. Known for his own style and versatility in acting, Satyan was one of the pioneers of realistic acting in Indian film industry. He is respectfully called Sathyan Master. He was also a soldier in the British Indian Army and later a police officer with the Travancore State Police.

Ramu Kariat was an Indian film director for almost three decades from the 1950s to the 1970s, who directed many acclaimed films in the Malayalam cinema. His noted films include Neelakkuyil (1954), Minnaminungu (1957), Mudiyanaya Puthran (1961), Moodupadam (1963) and the National Award winning Chemmeen (1965).

K. Bhaskaran Nair, known by his stage name Adoor Bhasi, was an Indian actor and film director from Kerala. Adoor Bhasi was almost always cast as the man who stands next to the hero. His hilarious actions and roles became the cynosure of comic scenes in the Malayalam films of the 1950s, 1960s, 1970s and 1980s. He is also famous for his eloquent speeches in fluent English. He directed three Malayalam films during the late 1970s. 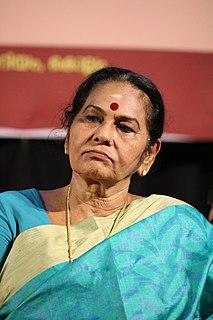 Maheshwari Amma, better known by her stage name K. P. A. C. Lalitha, was an Indian film and stage actress who worked primarily in Malayalam cinema and theatre. She started her acting career with K. P. A. C., a theatre collective in Kayamkulam, Kerala. In a career spanning five decades, she starred in over 550 films.

Kerala People's Arts Club (KPAC) is a theatrical movement in Kayamkulam, Kerala, India. It was formed in the 1950s by a group of individuals having close ties with Communist Party of India in Kerala. KPAC was very influential in popularising the Communist movement in Kerala.

Jayabharathi is an Indian actress. She is a two-time recipient of the Kerala State Film Award for best actress.

Sri. P. N. Karunakaran, popularly known as Kambisseri Karunakaran was an Indian journalist who wrote in Malayalam language. He was the chief editor of Janayugam Daily, Balayugam, the Novel Pathippu, Cine Rama, and Janayugam Varika (Weekly), a group of publications in Malayalam language, owned by the Communist Party of India. Beside being a journalist he was a politician, writer, orator, actor, satirist, atheist and rationalist.

Ningalenne Communistakki is a Malayalam socio-political play by Kerala People's Arts Club (KPAC). This was the second and most popular stage play of KPAC. This drama propelled KPAC into the forefront of kerala cultural scene and played a historical role in popularising the Communist movement in Kerala during 1950's eventually leading to the establishment of first democratically elected communist ministry in the world in 1957 in Kerala. 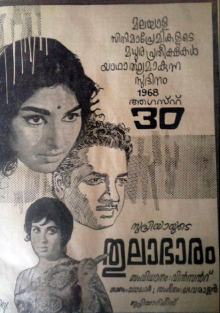 Sarasayya is a 1971 Indian Malayalam film, directed by Thoppil Bhasi and produced by P. V. Sathyam. The film stars Sathyan, Madhu, Sheela and Jayabharathi in the lead roles. The film had musical score by G. Devarajan. It is a sequel to the Malayalam film Ashwamedham of 1967. It won the Kerala State Film Award for Best Film.

Kottayam Chellappan was an Indian actor in Malayalam movies. He was also a renowned stage actor and film actor who was very active in Malayalam films during the 1960s and '70s. He died on 26 December 1971. 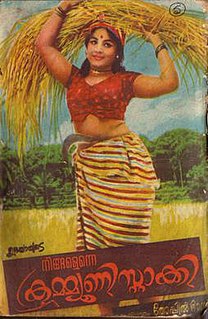 Ningalenne Communistakki is a 1970 Indian Malayalam-language film written and directed by Thoppil Bhasi and produced by Kunchacko. It is based on the play of the same name. The film stars Prem Nazir, Sathyan, Sheela and Jayabharathi in the lead roles. The film had musical score by G. Devarajan. 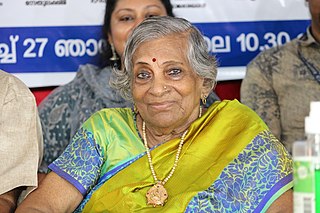