Thoppur lies on National Highway 44, a major north-south highway in India. [1] It is also the terminal point of State Highway 20 which connects to the town of Mettur and the city of Erode. [2] The NH-44 , road between Dharmapuri and Thoppur in Tamilnadu is very much prone to fatal accidents due to the poor road design in the hilly slopes.

The Kaveri is one of the major Indian rivers flowing through the states of Karnataka and Tamil Nadu. In ancient Tamil literature, it was also called Ponni. The Kaveri river rises at Talakaveri in the Brahmagiri range in the Western Ghats, Kodagu district of the state of Karnataka, at an elevation of 1,341 m above mean sea level and flows for about 800 km before its outfall into the Bay of Bengal. It reaches the sea in Poompuhar in Mayiladuthurai district. It is the third largest river – after Godavari and Krishna – in southern India, and the largest in the State of Tamil Nadu, which, on its course, bisects the state into north and south. 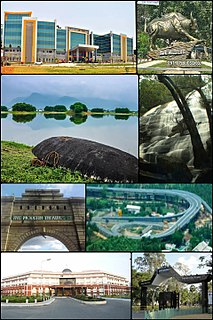 Salem is a major city in Salem district, located on the banks of Thirumanimutharu river in the Indian state of Tamil Nadu. Salem is the sixth largest urban agglomeration and metropolitan city in the state by population next to Chennai, Coimbatore, Madurai, Tiruchirappalli and Tiruppur and the sixth largest city in Tamil Nadu by area covering 124 km2 (48 sq mi). 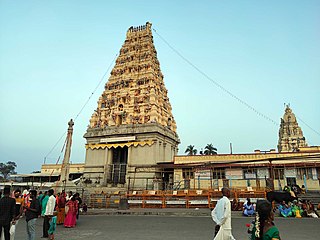 Erode District is one of the 38 districts in the state of Tamil Nadu in India. It was the largest district by area in the state before the formation of Tirupur District in 2009. The headquarters of the district is Erode. It is divided into two revenue divisions, Erode and Gobichettipalayam, and is further subdivided into 10 taluks. Erode District was a part of Coimbatore District before its division into two on 17 September 1979. It covers an area of 5,722 square kilometres (2,209 sq mi), and as of 2011, had a population of 2,251,744. 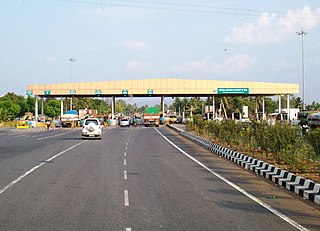 Omalur is a panchayat town and headquarters of Omalur taluk in the Salem District in the Indian state of Tamil Nadu. It is situated on the National Highway 7 between 11° 73333" latitude and 78° 06667" longitude. It has a population of about 13,600. Agriculture, leather and handloom textiles are the major businesses.

Mettur is an industrial and tourist town located in the Salem district in the state of Tamil Nadu, India. It is best known for the Mettur Dam which is the largest dam in south India.

Bhavani is a Municipality in Erode District, Tamil Nadu, India. It is located at the northern periphery of Erode City Municipal Corporation and is around 105 km (65 mi) from Coimbatore and 60 km (37 mi) from Tiruppur and Salem. Bhavani is also known as "Carpet City" as it is known for its carpet industry; blankets and carpets manufactured in the town are known as Bhavani Jamakkalam. As of 2011, the town covers an area of 2.17 square kilometres (0.84 sq mi) and has a population of 39,225. It is a grade II municipality. 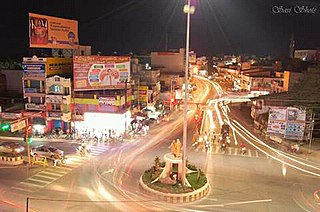 Dharmapuri, is a city in the western part of Tamil Nadu, India. The city is located at 50 km from Krishnagiri, 69 km from Salem, 126 km from Bangalore, 200 km from Coimbatore and Tiruchirappalli, 300 km from Madurai and the state capital Chennai. It is located between latitudes N 11 47’ and 12 33’ and longitudes E 77 02’ and 78 40’. It is one of top leading mango cultivator and producer of state. 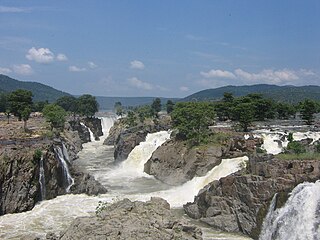 Dharmapuri is one of the 38 districts in the state of Tamil Nadu in India. It is the first district created in Tamil Nadu after the independence of India by splitting it from then-Salem district on 2 October 1965. Dharmapuri District is one of the major producers of mango in the state, fine quality granite is found in the district. It is also one of the main sericulture belts in the state. Around 30 percent of the district's area is under forest cover. Kaveri enters Tamil Nadu through this district. Dharmapuri district had the lowest literacy rate of 74.23% in Tamilnadu during the 2011 census. 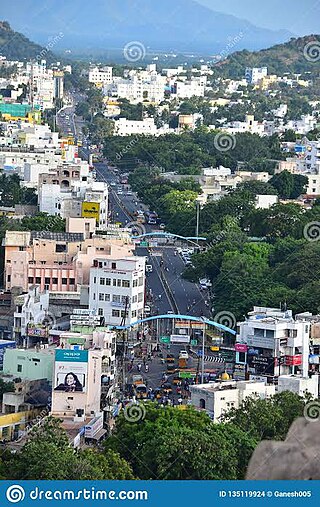 Namakkal District is one of the 38 districts in the state of Tamil Nadu, India. The district was bifurcated from Salem District with Namakkal town as headquarters on 25 July 1996 and started to function independently from 1 January 1997. The district has seven taluks (subdivisions): Tiruchengode, Namakkal, Rasipuram, Paramathi Velur, Sendamangalam, Kumarapalayam, Kolli Hills and Mohanur. It has two revenue divisions: Tiruchengode and Namakkal. As of 2011 census, Namakkal district had a population of 1,726,601 with a sex-ratio of 986 females for every 1,000 males and Tiruchengode is the largest city in terms of population. Namakkal district is geographically affiliated to Kongu Nadu region. The district is famous for its large poultry industry, egg production and lorry bodybuilding industry, for which it is often referred to as "Egg City" and "Transport Hub of South India".

Chengam or Chengamma as on British records, is an important market town and a taluk headquarter in the Foot hills of Eastern ghats in Tiruvannamalai district of Tamil Nadu, India. Chengam is the gateway to the Chengam pass in the Eastern ghats between Javvadhu hills to the north and Chennakesava hills to the south. The town is also the center for various industrial activities which includes Sathanur dam hydro-electric project, Aavin milk processing plant and Periya Kolappadi SIDCO estate.

Harur is a third grade municipality in the Dharmapuri district of Tamil Nadu, India. It is one of two revenue blocks in the district.

Ghat Roads are access routes into the mountainous Western and Eastern Ghats, mountain ranges of the Indian subcontinent. These roads are remarkable feats of engineering, and most were constructed during the British Raj. Ghat roads were built to connect to the hill stations established in the mountains for residents to avoid summer heat. They generally served to connect coastal (seaside) areas with the upper region Deccan plateau of the Indian subcontinent.

Bodamalai Betta is a 1,200 metres (3,937.0 ft) mountain in the Eastern Ghats of South India. It is in the hills 20 kilometres (12.4 mi) west of the Stanley Reservoir in Salem District of Tamil Nadu state, India.

State Highway 20 is a state highway connecting Erode and Thoppur in the South Indian state of Tamil Nadu. It has a total length of 90 kilometres (56 mi). The road is maintained by funds received from the World Bank. It is used as an alternate route to Krishnagiri and Dharmapuri.

Gettupatti is a village in Dharmapuri District of Tamil Nadu State, India.
It comes under Dokkubothanahalli Panchayath and its south regions is covered by thoppur forest.
It is located 20 km towards South from Dharmapuri and 308 km from State capital Chennai.

Kallakurichi is one of the 38 districts in the state of Tamil Nadu in India. The district headquarter is Kallakurichi. Kallakurichi District was announced on 8 January 2019 and it came into existence on 26 November 2019.