Thor: Vikings is a 5-issue comic book limited series published by MAX Comics, an imprint of Marvel Comics for adult audiences, in July–November 2003. Written by Garth Ennis and illustrated by Glenn Fabry, the series follows Thor's adventures against a group of thousand-year-old zombie Vikings who attack New York City. [1] [2] [3]

The series is composed of five comics :

In 1003 AD, along the west coast of Norway, Lord Harald Jaekelsson and his Vikings raid the town of Lakstad. After raping the women and killing nearly all the villagers, they decide to leave for the New World. But the town's wise man, the last survivor, places a curse on them with the help of a runestone. He pleads with the gods that they never reach their destination. Harald takes a bow and shoots the wise man dead, and they sail on. They sail for 1000 years, until they finally land at the South Street Seaport in New York. They are not human any more; they are powerful zombies. They kill everyone they encounter, and are about to rape a woman when Thor shows up. [4]

Harald Jaekelsson recognizes the Avenger as the god of thunder. He beats Thor without difficulty—breaking Thor's arms, tying Mjolnir to him, and tossing him in the Hudson river. His men continue their reign of terror over New York. They create a mountain of severed heads. They fight and defeat policemen and the army. Their Viking ship, magically powered by the spell, can fly in the streets and throw fire. Thor manages to pull himself out of the river; Doctor Strange is waiting for him. [5]

After recovering in Doctor Strange's house, Thor follows Strange into a room where a mystic river runs "somewhere time flows by like a river and may be observed as such." This allows the sorcerer to look at the past, seeking answers. There, they discover how Harald and his crew came to be so powerful: the death of the town wise man provided too much blood for the spell. They determine that to stop Harald and his Vikings, they need descendants of his bloodline. They look through time and select three mighty warriors and bring them forward to help: Sigrid, a Viking battle maiden; Magnus of the Danes, a Teutonic knight; and Erik Loonroth, a Luftwaffe Messerschmitt pilot in the Second World War. Meanwhile, the Avengers—Captain America, Iron Man, Vision, the Scarlet Witch, and Hawkeye—have been defeated and need medical assistance. More Marines are sent to fight against Harald and his men. [6]

A helicopter flies over the city and discovers the heads of the Marines on pikes in the street. Doctor Strange and Thor ask Harald Jaekelsson's descendants to fight with them. They are all ready to fight for a noble cause, especially Erik. Doctor Strange uses their blood to empower a spell to make them as strong as the undead Vikings, and they go to fight Harald, who is now situated in a bone throne at the top of the Empire State Building. The heroes defy Harald, and the Messerschmitt attacks the flying Viking ship. [7]

The heroes stage an assault on Harald Jaekelsson's forces, with Erik in the air and the others fighting on the ground. Harald stabs Thor through the back, knocks out Sigrid, and wounds Magnus, but Thor retaliates. The Vikings jump onto Erik's airplane; the pilot safely bails out and lets the plane crash into the Viking ship, destroying them both. All Harald's dead Vikings are destroyed. Out of respect, Sigrid, Magnus and Erik allow Thor to finish Harald alone. Thor, punching Harald, sends him directly off into space. Finally, the three warriors return to the times of their own wars. When they disappear, Thor says: "I will see thou in Valhalla." [8]

The trade paperback Thor: Vikings reached 5th place in the Top 50 Graphic Novels/TPB's in terms of sales in February 2004. [14] 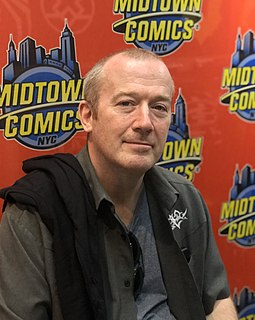 Garth Ennis is a Northern Irish-born naturalized American comics writer, best known for the Vertigo series Preacher with artist Steve Dillon and his nine-year run on Marvel Comics' Punisher franchise. He has collaborated with artists such as Dillon and Glenn Fabry on Preacher, John McCrea on Hitman, Marc Silvestri on The Darkness, and Carlos Ezquerra on both Preacher and Hitman. 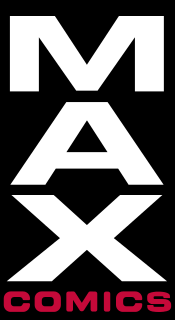 MAX Comics is an imprint of Marvel Comics that specializes in comic book media aimed at adult-only readers. It was launched in 2001 after Marvel broke with the Comics Code Authority and established its own rating system.

Joseph Quesada is an American comic book artist, writer, editor, and television producer. He became known in the 1990s for his work on various Valiant Comics books, such as Ninjak and Solar, Man of the Atom. He later worked on numerous books for DC Comics and Marvel Comics, such as Batman: Sword of Azrael and X-Factor, before forming his own company, Event Comics, where he published his creator-owned character, Ash. 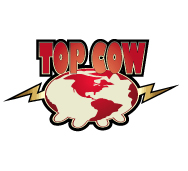 Top Cow Productions is an American comics publisher, a partner studio of Image Comics founded by Marc Silvestri in 1992. 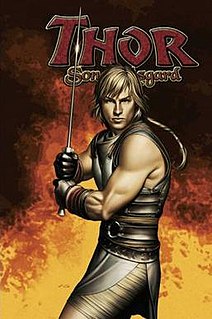 Thor: Son of Asgard is a comic book series published by Marvel Comics from March 2004 to January 2005. Written by Akira Yoshida and illustrated by Greg Tocchini, the series follows Thor's early adventures in Asgard with Sif and Balder. It was originally a limited series of six issues but, thanks to popular demand, it was later extended to an ongoing series that lasted for twelve issues in total. 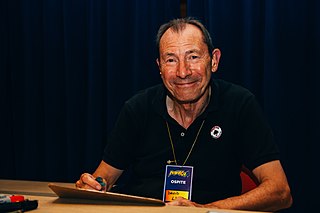 David Lloyd is a British comics artist best known as the illustrator of the story V for Vendetta, written by Alan Moore. 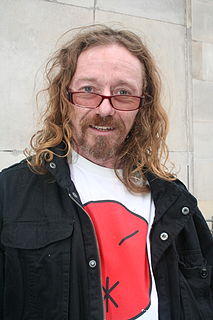 Glenn Fabry is a British comics artist known for his detailed, realistic work in both ink and painted colour.

James Palmiotti is an American writer and inker of comic books, who also does writing for games, television and film.

Steve Pugh is a British comic book artist who has worked for American and British comic producers including DC, Marvel, Dark Horse and 2000 AD. 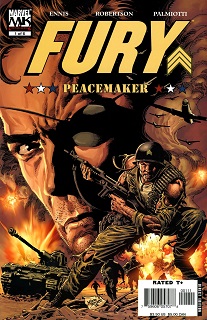 Fury: Peacemaker is a six issue miniseries written by Garth Ennis and drawn by Darick Robertson. It was published under the Marvel Knights imprint and takes place within the same continuity as Ennis' other Marvel Max and Marvel Knights series. The story functions as an origin story for Nick Fury and takes place before he joined the Howling Commandos.

Thor: Blood Oath is a 6-issue comic book limited series published by Marvel Comics in September to December 2005 and is written by Michael Avon Oeming, with art by Scott Kolins.

The Punisher was a comic book ongoing series published under the MAX imprint of Marvel Comics, featuring vigilante anti-hero, the Punisher.

Fury is a 2001 six issue miniseries about Nick Fury written by Garth Ennis. The series was published under Marvels MAX imprint and featured much harder violence and explicit material than was common at the time which caused some controversy among fans and comic creators. The series takes place outside of main Marvel comics continuity and is interconnected with other series written by Garth Ennis under the Max imprint. It was followed by a prequel and a sequel.

Rick Spears is an American comic book writer, best known for Teenagers from Mars and other independent comics.

Widowmaker, in comics, may refer to:

Fury: My War Gone By, also known as Fury MAX or Fury MAX: Cold Warrior is a 2012-2013 thirteen issue comic book limited series written by Garth Ennis and published by Marvel Comics. The series follow the character of Nick Fury during his military career under the course of the 20th century after the Second World War, when Fury participated in most of the United States cold war initiatives around the globe. Like most of Ennis's previous works on characters that are mainly figures in the world of superheroes so does the series do away with those elements, it instead fixate on the real life dealings of soldiers and spys in historical situations. It is a sequel to the 2001 series Fury and the 2006 series Fury: Peacemaker, both also written by Garth Ennis. The comic was drawn by Goran Parlov who had previously worked with Ennis on his Punisher series. The series garnered decent sales and critical acclaim.

The Punisher: War ZoneVol. 2, is the second volume in the Punisher: War Zone series is a comic book limited series published by Marvel Comics about the vigilante The Punisher. The series was written by Garth Ennis and drawn by Steve Dillon. Dillon also drew all of the covers to the series. The series is a follow-up to Ennis and Dillon's previous limited series work and marked the end of Ennis's eight-year-long run with the character.

Midnighter is an American comic book series published by WildStorm, first issued in November 2006. It is a spin-off from The Authority, a superhero team comic book created by Warren Ellis and Bryan Hitch, and follows the solo adventures of Midnighter, "the greatest tactician in the history of mankind". The first six issues were written by Garth Ennis, followed by three issues made by different writers; the last eleven final issues were written by Keith Giffen. Midnighter ended with its twentieth issue, followed by the limited series Number of the Beast. The series is also known as Midnighter to differentiate itself from the character's 12-issue latter series first published by DC Comics in 2015.

Punisher: The Platoon is a 2017 war comic book limited series published by Marvel Comics under the MAX imprint, the series centered around the character of Frank Castle during his first tour in Vietnam as a young man. It is written by Garth Ennis who has previously worked extensively on the character of Frank Castle, under the Punisher Max line and in mainstream Marvel comics.