He was born in Kristiania to judge Haakon Hasberg Breien and Andrea Landstad. He graduated as cand.jur. in 1921. He was judge at the Eidsivating Court of Appeal from 1946 to 1970, and served as acting Supreme Court Justice in 1957. He was decorated Commander of the Order of St. Olav in 1969. [1]

Anja Breien is a Norwegian film director and screenwriter. One of the leading figures of the Norwegian film industry, and one of the first women to rise to prominence as a writer-director in Norway, Breien's body of work in fiction and documentary explores social and political issues, notably women's rights within the context of Norwegian society.

Torolf Juell was a Norwegian military officer and judge.

Helge Haavind was a Norwegian barrister.

Arnold Hazeland Jr. was a Norwegian civil servant and judge. 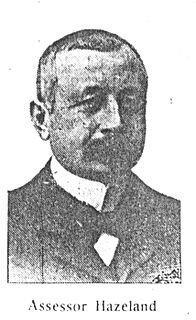 Arnold Mathew Johan Philip Hazeland was a Norwegian attorney, Supreme Court Justice as an Anarchist in the late 1920s, and eventually later on a politician for the Labour Party. Hazeland worked on several translations of the works of Russian scientist and anarchist, Peter A. Kropotkin. What became of his manuscripts is not known.

Olav Svendsen was a Norwegian lawyer and judge. He was born in Kristiania. He graduated as cand.jur. in 1922, was a barrister in Oslo from 1925 to 1929, and from 1929 assigned with the Oslo police. During the occupation of Norway by Nazi Germany, from 1941 to 1945, he chaired the juridical office at the Norwegian Legation in Stockholm. From 1947 to 1971 he served as stipendiary magistrate in Vinger and Odal District Court.

Johan Albrigt Rivertz was a county governor of Finnmark county and later a judge on the Supreme Court of Norway.

Breien is a Norwegian surname. Notable people with the surname include:

Sigrun Otto was a Norwegian actress. She was married to the theater director Reidar Otto.

Et øye på hver finger is a Norwegian comedy film from 1961 directed by Nils-Reinhardt Christensen. He also wrote the script for the film based on Ingeborg Storm's novel of the same name. The film stars Georg Løkkeberg, Trulte Heide Steen, and Harald Heide Steen.