Thor Nis Christiansen (December 28, 1957 – March 30, 1981) was a Danish-American serial killer from Solvang, California. He committed his first three murders in late 1976 and early 1977, killing young women of similar appearance from nearby Isla Vista. His crimes motivated large demonstrations opposed to violence against women, and in favor of better transportation for the young people residing in Isla Vista. [1] In 1979, he killed a young woman from Los Angeles. A fifth intended victim escaped with a bullet in her head, and later identified him in a Los Angeles bar. [2]

Thor Nis Christiansen was born in Denmark, and immigrated to the United States with his parents when he was five years old. The family initially settled in Inglewood, California, and then moved to Solvang, where his father, Nis, ran a restaurant. Christiansen was a good student until his junior year of high school, when he began neglecting his schoolwork. He moved out of his parents' house, dropped out of school, and began working as a gas station attendant. During this time, Christiansen gained a great deal of weight, at one point weighing 275 pounds (125 kg). [3]

Christiansen became obsessed with fantasies of shooting women and having sex with their corpses. He stole a .22 caliber pistol from a friend and committed his first three murders. He then moved to Oregon, lost weight, and moved back to Santa Barbara County to complete his high school diploma at a junior college. Christiansen moved into an apartment in Goleta with a woman in her twenties; they had met while she was hitchhiking. [3] Christiansen committed another murder during this period. Secondary sources indicate Christiansen's modus operandi was to meet his victims while they were hitchhiking, then shoot them in the head with a .22 caliber pistol and sexually assault them post-mortem.

Although several young women had disappeared from Isla Vista, California, in late 1976, Christiansen's first confirmed victim was Patricia Marie Laney, who disappeared January 18, 1977. The next day, her body was found on an isolated road in Refugio Canyon, in the Santa Ynez Mountains northwest of Isla Vista near Rancho del Cielo. [4] Jacqueline Anne Rook's body was found the day after that, near Laney's. [5]

Mary Ann Sarris' body was found on May 22, 1977, near Los Alamos. Laura Sue Benjamin's body was found in a culvert near Angeles Forest Highway and Big Tujunga Road in the San Gabriel Mountains north of Los Angeles. [6] She was reported to have been a prostitute. [7] Christiansen shot his fifth intended victim, Lydia Preston, in the head, inside his vehicle, on April 18, 1979. She escaped with severe injuries. [2]

Preston met Christiansen again on July 11, 1979, in the Bottom Line Bar in Hollywood, and reported him to police, who promptly arrested him. Because of Christiansen's address in Goleta, and the similarity of Preston's ordeal to evidence police had collected in the Rook, Sarris, and Laney cases, Christiansen became a suspect in the Isla Vista murders. After his arrest, Santa Barbara County law enforcement realized they had investigated him as a suspect (among approximately one hundred others) in 1977. They noted his possession of a .22 caliber pistol during an earlier arrest for being a minor in possession of alcohol. [2]

Christiansen was first tried in early 1980 in Santa Monica for the murder of Benjamin. He initially pleaded insanity, but withdrew the plea. [11] In June, 1980, he pleaded guilty to the Isla Vista murders, [12] and was sentenced to life in prison. [13]

On March 30, 1981, Christiansen died after being stabbed in the exercise yard at Folsom State Prison. His killer was not identified. [14] According to his defense attorney, James Westwick, psychiatrists had warned that Christiansen would be in danger in prison, due to the sexual nature of his murders and his youthful, blond appearance. [14] 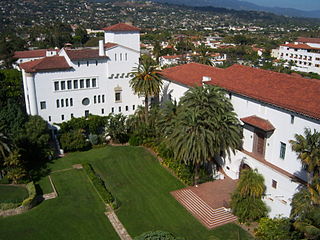 Santa Barbara County, California, officially the County of Santa Barbara, is a county located in the southern region of the U.S. state of California. As of the 2010 census, the population was 423,895. The county seat is Santa Barbara, and the largest city is Santa Maria. 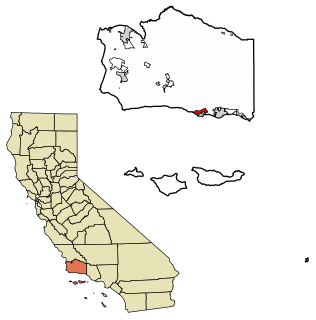 Goleta is a city in southern Santa Barbara County, California, USA. It was incorporated as a city in 2002, after a long period as the largest unincorporated populated area in the county. As of the 2000 census, the census-designated place had a total population of 55,204; however, a significant portion of the census territory of 2000 did not incorporate into the new city. The population was 29,888 at the 2010 census. It is known for being near the University of California, Santa Barbara campus, although the CDP of Isla Vista is closer to the campus. 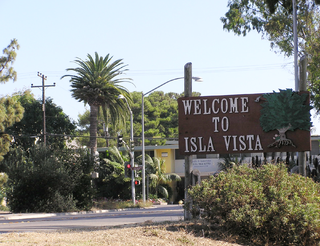 Isla Vista is an unincorporated community and census-designated place (CDP) in Santa Barbara County, California in the United States. As of the 2010 census, the CDP had a population of 23,096. The majority of residents are college students at nearby University of California, Santa Barbara or at Santa Barbara City College. The beachside community lies on a flat plateau about 30 feet (9 m) in elevation, separated from the beach by a bluff. 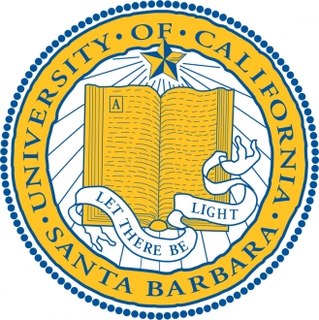 The Daily Nexus is a campus newspaper at the University of California, Santa Barbara (UCSB). 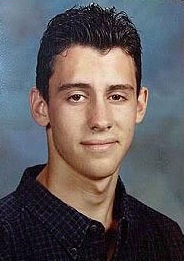 Nicholas Samuel “Nick” Markowitz was an American teenager who was kidnapped and murdered at the age of 15 after a feud over drug money between his half-brother Benjamin Markowitz and Jesse James Hollywood. 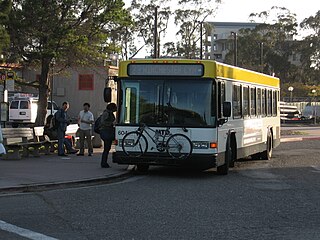 The Santa Barbara Metropolitan Transit District (MTD) is a public transit agency providing bus service in the southern portion of Santa Barbara County, California. It serves the cities of Santa Barbara, Carpinteria, and Goleta as well as the unincorporated areas of Montecito, Summerland, and Isla Vista.

The Gap Fire was a fire that burned 9,443 acres (38.21 km2) of the Santa Ynez Mountains above Goleta, California between July 1 and July 28, 2008. The fire burned primarily on steep slopes above the community of Goleta. Dense brush that had not burned in over fifty years, coupled with steep terrain made the fire challenging for firefighters.

Marine Corps Air Station Santa Barbara was a United States Marine Corps air station that was located in Goleta, California 70 miles (113 km) north of Los Angeles during World War II. It was also known as the Goleta Air Station in the 1940s. Commissioned on December 4, 1942, the air station consisted of an airfield that had been built into the Goleta Slough and served as a training base for numerous squadrons before they deployed to support combat operations in the Pacific Theater. Later in the war, the station would serve as home to Marine squadrons that were trained to operate from aircraft carriers providing close air support for their fellow Marines on the ground. Following the surrender of Japan and the subsequent drawdown of forces that ensued, the air station closed its doors in 1946 and today its property is home to the Santa Barbara Municipal Airport and the campus of the University of California, Santa Barbara.

Goleta Point is a small peninsula on the central coast in the U.S. state of California. It is located 3 miles (4.8 km) southwest of the city of Goleta. The point forms an extension into Santa Barbara Channel and is situated within the campus of University of California, Santa Barbara (UCSB). It is characterized by a beach cliff, crashing waves, and a view of the Channel Islands. The rock formation is frequented by shorebirds.

The University of California, Santa Barbara (UCSB) traces its roots back to the 19th century, when it emerged from the Santa Barbara School District, which was formed in 1866 and celebrated its 145th anniversary in 2011. UCSB's earliest predecessor was the Anna S. C. Blake Manual Training School, named after Anna S.C. Blake, a sloyd-school which was established in 1891. From there, the school underwent several transformations, most notably its takeover by the University of California system in 1944.

Goleta Slough State Marine Conservation Area (SMCA) is a marine protected area in Goleta in Santa Barbara County on California’s south coast. The SMCA covers .25 square miles. The SMCA protects marine life by limiting the removal of marine wildlife from within its borders. Goleta Slough SMCA prohibits take of all living marine resources except for take pursuant to routine maintenance, dredging, habitat restoration, research and education, maintenance of artificial structures, and operation and maintenance of existing facilities in the conservation area per any required federal, state and local permits, or activities pursuant to Section 630, or as otherwise authorized by the department.

On the evening of May 23, 2014, in Isla Vista, California, 22-year-old Elliot Rodger killed six people and injured fourteen others near the campus of University of California, Santa Barbara, before killing himself inside his vehicle.

Harriet Jean Moody was an American architect who designed distinctive Storybook Cottages in the Santa Barbara, California area. The Historic Landmarks Commission has been working with the Santa Barbara County Board of Supervisors and Santa Barbara Planning Board to protect the close to three dozen homes known to have been built by her. 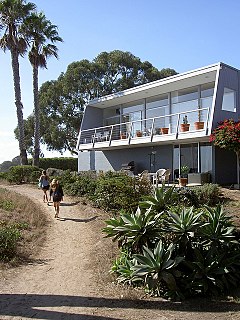 Jean Louise Hodgkins and Vera B. Skubic built two houses in Del Playa Drive, Goleta, California, that, with a third one were historic evidence of the mid-20th century international style presented by architect Richard B. Taylor from South Carolina.