Thoracocharax securis, the giant hatchetfish, is a hatchetfish found in the Amazon River Basin. Adults will grow up to 6.8 cm in the wild and 9 cm in the aquarium. It is a rarely seen species in the aquarium hobby. [1] It is known to glide up to 2.74 meters (9 ft) out of the water. [2]

Thoracocharax securis should be kept in group of at least 5 individuals. The minimum aquarium volume for such a group is 150 L.

Acanthuridae are the family of surgeonfishes, tangs, and unicornfishes. The family includes about 86 extant species of marine fish living in tropical seas, usually around coral reefs. Many of the species are brightly colored and popular in aquaria. 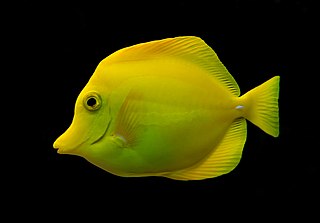 The yellow tang is a saltwater fish species of the family Acanthuridae. It is one of the most popular marine aquarium fish. 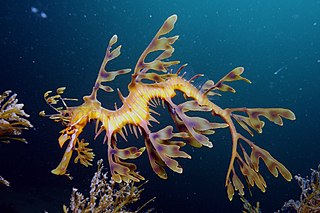 The leafy seadragon or Glauert's seadragon, is a marine fish in the family Syngnathidae, which includes seadragons, pipefish, and seahorses. It is the only member of the genus Phycodurus.

The orbicular batfish, also known as the circular batfish, orbiculate batfish, round batfish, or orbic batfish is a popular aquarium fish which occurs naturally in the tropical waters of the Indian and Pacific Oceans.

Sweepers are small, tropical marine perciform fish of the family Pempheridae. Found in the western Atlantic Ocean and Indo-Pacific region, the family contains about 26 species in two genera. One species is the target of subsistence fisheries in Japan, where the fish is much enjoyed for its taste. Sweepers are occasionally kept in marine aquaria.

The common hatchetfish or river hatchetfish is a tropical fish belonging to the freshwater hatchetfish family (Gasteropelecidae). Originating in South America in the Peruvian and middle Amazon, the Guianas and Venezuela, it grows to about 2.5 inches (6.5 cm). The fish gets its name from its relatively large protruding belly which resembles a hatchet. Hatchetfish will often jump out of the water when alarmed, propelled by their large, winglike pectoral fins. They also jump to catch small aerial insects.

The freshwater hatchetfish are a family, Gasteropelecidae, of ray-finned fish from South and Central America. The common hatchetfish is the most popular member among fish keeping hobbyists. The family includes three genera: Carnegiella, Gasteropelecus, and Thoracocharax.

The marbled hatchetfish is a small, normally 3.5 cm (1.4 in) in length, freshwater ray-finned fish native to South America. Hatchet shaped, it presents a gold line extending from its eye to its caudal fin while the area below has a brown and cream colored marble-like pattern.

The Vancouver Aquarium is a public aquarium located in Stanley Park in Vancouver, British Columbia, Canada. In addition to being a major tourist attraction for Vancouver, the aquarium is a centre for marine research, ocean literacy education, conservation and marine animal rehabilitation.

Anubias is a genus of aquatic and semi-aquatic flowering plants in the family Araceae, native to tropical central and western Africa. They primarily grow in rivers and streams, but can also be found in marshes. They are characterized by broad, thick, dark leaves that come in many different forms. The genus was revised in 1979 and since then its nomenclature has been stable. Species can be determined by using mostly characteristics of the inflorescence. Because of the often shady places where the plants grow, the genus was named after the Egyptian god Anubis, the god of the afterlife. The genus was first described in 1857 by Heinrich Wilhelm Schott, with A. afzelii as its type species.

Salesforce Tower, 110 Bishopsgate is a commercial skyscraper in London. It stands 230 metres (755 ft) tall including its 28-metre (92 ft) mast making it the tallest building in the City of London financial district and the third tallest in Greater London and the United Kingdom, after the Shard in Southwark and One Canada Square at Canary Wharf. 110 Bishopsgate is located on Bishopsgate and is bordered by Camomile Street, Outwich Street and Houndsditch.

Perisesarma bidens, the red-clawed crab, is a species of crab found in the Indo-Pacific region from Zanzibar to Japan and Fiji. 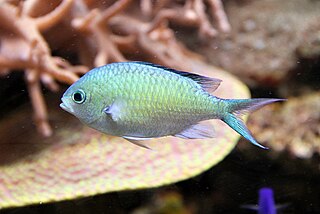 Chromis viridis is a species of damselfish. Individuals tend to be iridescent apple-green and light blue, and reach a maximal length of 10 cm. 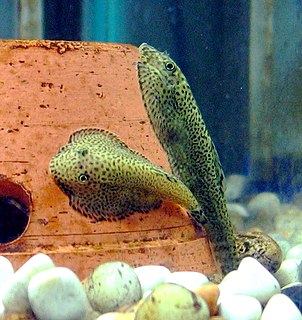 The giant cichlid, also known as the emperor cichlid, is a species of fish in the family Cichlidae, endemic to Lake Tanganyika in Africa. It is the only member of its genus Boulengerochromis and tribe Boulengerochromini.

The black-winged hatchetfish is a freshwater ray-finned fish native to South America. 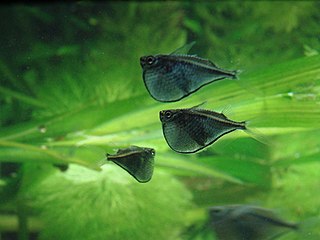 Thoracocharax is a genus of freshwater hatchetfishes found in the Amazon, Orinoco and Paraná basins in South America. These fish live just under the surface of the water.

Carnegiella schereri, a species of freshwater hatchetfish, is native to the Amazon Basin in Peru and Brazil. It is often sold for the aquarium hobby under the name silver hatchetfish, dwarf hatchetfish, or Scherer's hatchetfish, and grows to about 2.6 centimeters.