Thoranai (transl.Posture) or Pistha (transl. Person with attitude) is a 2009 Indian action drama film [1] written and directed by Sabha Ayyappan, who previously worked as an associate director for Malaikottai , and produced by Vikram Krishna under the banner G K Film Corporation. The film stars Vishal and Shriya Saran and Prakash Raj, Kishore, and Santhanam in another pivotal roles. Shot simultaneously in Tamil and Telugu languages with Ali replacing Santhanam as Vishal's friend as well as a different supporting cast. Both Tamil and Telugu opened to mixed reviews. It was remade in Bhojpuri with Khesari Lal Yadav as "Shola aur Shabnam".

Guru (Ganesan / Rambabu) and Tamizharasu / Suryaprakash are dreaded gangsters in Chennai/Vizag. They are against pitted each other and fight to establish their supremacy in city. They indulge in gang war painting Chennai / Vizag red. Enters Murugan / Murali Krishna. A native of Madurai / Ramachandrapuram, he comes to Chennai / Vizag with a mission. He leaves his village promising his mother that he would return only with his brother, who had run away from the house about two decades ago.

Murugan / Murali Krishna gets the help of his friend Vellaichamy / Chittibabu. He comes across the gangsters and a sequence of events results in him incurring both their wrath. In a bloody duel with Guru, he learns that he is his brother, whom he has been searching for long. Now he is entrusted with the task of protecting him from Tamizharasu / Suryaprakash. How he accomplishes his task forms the crux.

Behindwoods wrote:"Thoranai does entertain, but a tighter script and better execution could have yielded far better results". [5] Sify wrote:"The problems with Thoranai are sundry. First and foremost, it's got a dead script. Nothing, simply nothing happens in the first half of the film". [6] Rediff wrote:"Thoranai's only merit is that it's marginally better than Sathyam . [7] The Times of India gave the film two stars and wrote that "It is a formidable star cast that you see in "Thoranai". However, what is missing is a convincing story". [8]

The Times of India gave the film one and a half stars out of five stating that "Inspite of a dud like Salute , Tamil star Vishal hasn't realised the significance of a solid plot even for a star-centric film." [9]

Silambarasan Thesingu Rajendar, also known as S.T.R. or Simbu, is an Indian actor, filmmaker and musician in Tamil cinema. He began his acting career by playing roles as a child artist in films directed by his father T. Rajendar, before his first lead role in Kadhal Azhivathillai (2002), under his father's direction and produced by his mother Usha.

Shriya Saran Bhatnagar (pronounced [ʃrɪja səɾən]; is an Indian actress and model who works predominantly in Telugu, Tamil, and Hindi-language films. Although Saran aspired to become a well-known dancer, she became an actress with her film debut in 2001 with the Telugu film Ishtam, and had her first commercial success with Santhosham. She is one of the most popular and highest-paid actresses in south cinema industry, and has acted in over 75 films. 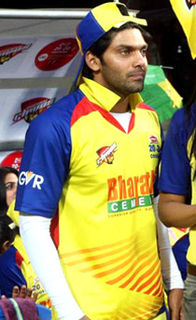 Jamshad Cethirakath, known mononymously by his stage name Arya, is an Indian actor and producer who predominantly appears in Tamil cinema. Arya has won the Filmfare Award for Best Male Debut – South and received two nominations each for Filmfare Awards and Vijay Awards. He was included on the 2015 edition of the Forbes India Celebrity 100, a list based on the top earning Indian celebrities.

Chellamae is a 2004 Indian Tamil-language romantic thriller film directed by Gandhi Krishna, who directed the critically acclaimed Nila Kaalam. The film stars Vishal and Reema Sen in the lead role, while Bharath plays an antagonistic role. Vivek and Girish Karnad play supporting roles. The film's score and soundtrack are composed by Harris Jayaraj. This film marks the debut of Vishal as an actor. 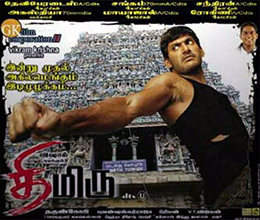 Thimiru (transl. Arrogance) is a 2006 Indian Tamil-language action film written and directed by debutant Tarun Gopi. It stars Vishal, Reema Sen and Sriya Reddy in lead and former football player I. M. Vijayan, Manoj K. Jayan and Vadivelu in supporting roles, whilst Kiran Rathod appears in an item number. The film's score and soundtrack are composed by Yuvan Shankar Raja. Produced by Vikram Krishna, under the banner of G K Film Corporation, it was released on 4 August 2006. Thimiru became highly successful at the box office and one of the top-grossing Tamil films in 2006.

Satyam is an Indian 2008 Tamil action drama film written and directed by debutante A. Rajasekhar in his directorial debut. The film stars Vishal in the role of a cop for the first time. Nayanthara plays the female lead role, while popular Kannada actor Upendra plays the parallel leading role as Vishal's mentor, making his Tamil debut. The film was simultaneously shot in Telugu as Salute, with a slightly different cast and locations. The film's score and soundtrack are composed by Harris Jayaraj. The film released on 14 August 2008. The film was produced by Vikram Krishna, Vishal's brother.

N. Santhanam is an Indian actor and producer who mainly works in Tamil cinema. Beginning his career as a comedian on television, he rose to fame through his performances in STAR Vijay's Lollu Sabha enacting the lead role in spoofs of Tamil films. He was subsequently given a chance by actor Silambarasan to feature in a supporting role in Manmadhan (2004) and then was signed on to appear in a host of films, notably winning good reviews for his work in Sachien (2005) and Polladhavan (2007). He appeared in a one-off leading role in Shankar's production Arai En 305-il Kadavul (2008) and became a staple feature as a comedian in successful Tamil films during the period, with his market popularity helping stuck films find distributors.

Sriya Reddy is an Indian actress who mainly appears in Tamil language films and was also an anchor and VJ. Born to former Indian test cricketer Bharath Reddy, Sriya worked as successful VJ at SS Music before pursuing an acting career as well. Following her debut in Samurai (2002), she appeared in nearly a dozen Tamil, Telugu and Malayalam films, with Black (2004), Thimiru (2006) and Kanchivaram (2008) probably being her best known projects. 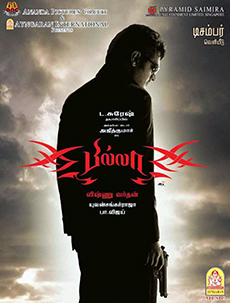 Billa is a 2007 Indian Tamil-language action thriller film directed by Vishnuvardhan. It is a remake of 1980 Tamil film Billa which itself was a remake of the 1978 Hindi film Don. The film stars Ajith Kumar who plays a double role as an underworld don and his friendly look-alike alongside Nayanthara and Namitha, while Prabhu, Rahman, Adithya Menon, and Santhanam playing supporting roles. It is produced by L. Suresh and Abdurrahman M while featuring a score and soundtrack by Yuvan Shankar Raja, cinematography by Nirav Shah and editing by A. Sreekar Prasad. 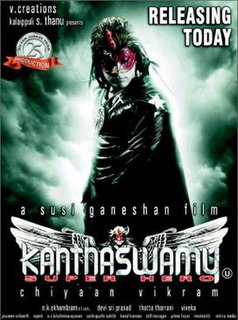 Kanthaswamy is a 2009 Indian Tamil-language superhero film written and directed by Susi Ganesan, starring Vikram as the titular character. Shriya Saran, Ashish Vidyarthi, Mukesh Tiwari, Prabhu, Krishna, and Vadivelu form the pivotal cast. The film's soundtrack and background score were composed by Devi Sri Prasad. The film's soundtrack was released on 17 May 2009 and the film was released on 21 August 2009. The film was partially reshot in Telugu as Mallanna with Brahmanandam replacing Vadivelu. It was remade in Bengali as Most Welcome, starring Ananta Jalil and Barsha..

Bhavani is a 2011 Indian Tamil-language crime action film directed by G. Kicha and starring Sneha in the titular role as the police officer. The film also has Vivek, Sampath Raj, and Kota Srinivasa Rao. Others in the cast include Aryan and Yasmin Khan. It is a remake of the Telugu film Karthavyam (1990). The film was released in Tamil on 11 March 2011.

Theeradha Vilaiyattu Pillai is a 2010 Indian Tamil-language romantic comedy film written and directed by Thiru. The film, produced by Vikram Krishna. Starring Vishal in the lead role along with Sarah-Jane Dias who makes her acting debut. while, Tanushree Dutta and Neetu Chandra making her debut in Tamil cinema Santhanam, Sathyan, Mayilsamy, and T. S. B. K. Mouli play supporting roles, while Sneha and Mallika Kapoor make special appearances and Prakash Raj in a guest role. The film was later dubbed into Hindi as Ek Khiladi 3 Hasina

Thillalangadi (transl. Defiler) is a 2010 Indian Tamil-language action comedy film directed by M. Raja. A remake of the 2009 Telugu film Kick, it stars Raja's brother Jayam Ravi along with Tamannaah, and Shaam, who reprises his role from Kick, and a supporting cast including Prabhu, Suhasini Maniratnam, Vadivelu, Santhanam, and Sanchita Shetty. The film features a soundtrack composed by Yuvan Shankar Raja, whilst S. Thaman's original score has been reused. The film, produced by Raja's father Editor Mohan and to be distributed by Sun Pictures, released on 23 July 2010.

Pattathu Yaanai is a 2013 Indian Tamil-language action comedy film written and directed by Boopathy Pandian and produced by Michael Rayappan.

Vennelakanti Rajeswara Prasad was an Indian lyricist and writer known for his work in Telugu cinema. He wrote over 2000 film songs, and was awarded Andhra Pradesh State Nandi Award for Best Lyricist in 2000. 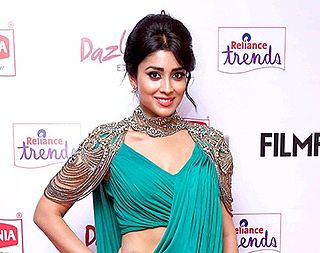 Shriya Saran is an Indian actress and model who has appeared mostly in Telugu, Tamil and Hindi language films. She made her acting debut with the Telugu film Ishtam (2001) and had her first commercial success with Santosham (2002). The following year, she made her Hindi cinema debut with a supporting role in Tujhe Meri Kasam, alongside Riteish Deshmukh and Genelia D'Souza. It was followed by the commercially successful crime drama Tagore (2003), in which she was paired opposite Chiranjeevi. The same year, she played a supporting role in the Tamil-Telugu bilingual film Enakku 20 Unakku 18, which marked her debut in Tamil cinema. In 2005, she had ten releases including Mazhai, S. S. Rajamouli's Chatrapathi, and Mogudu Pellam O Dongodu, in which she was among the only three characters of the film. Saran's solitary release as a lead actress in 2006 was the Tamil film Thiruvilaiyaadal Aarambam. 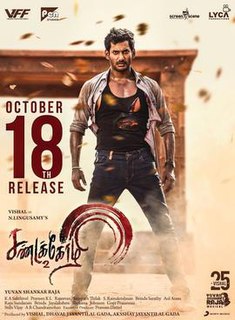 Sandakozhi 2 is a 2018 Indian Tamil-language action film written and directed by N. Linguswamy. A sequel to Sandakozhi, the film stars Vishal and Rajkiran reprising their roles from the first film, alongside Keerthy Suresh and Varalaxmi Sarathkumar. It also happens to be Vishal's 25th film. The film began production during September 2017 and was released on 18 October 2018.