After graduation in 2004 he trained to be a professional actor at Palma de Mallorca, Spain. He then took part in a few short movies. He had lead roles in The Typewriter , directed by FM Croissant in 2004, followed by Unscrewed 2 , directed by Florian Huber in 2005 and Butterfly Child , directed by Daniel Schmidt in 2006

In 2006, Schölermann took the part of Christian Mann in the soap opera Verbotene Liebe . After being cast in August, he first appeared on-screen on 27 November 2006. The role brought him international fame when Christian was paired with Oliver Sabel, played by Jo Weil. Christian and Olli became a phenomenon with fans all over the world. The couple was featured in many different stories together over the years, much to the producers fear of breaking up the couple.

Schölermann and his on-screen-partner Weil were judges on Mr. Gay World 2009. [1]

In 2012, it was announced that Schölermann would take over hosting duties for The Voice of Germany from previous host Stefan Gödde. [2] It was originally planned that his new work wouldn't affect Schölermann's work on Verbotene Liebe. However, his screen time got reduced and he then vacated the role on 7 December 2012 with Christian taking a job abroad. Online rumors indicated that Schölermann would return to the soap opera in early 2013, when the season finale of The Voice of Germany aired. These rumors turned out to be untrue as Schölermann's management made a statement that there are no plans of Thore Schölermann returning to Verbotene Liebe full-time. [3] However, he would be open to a short stint if the production could schedule around his other engagements. In June 2013 he returned filming, with his on-screen return planned for September. [4]

Instead Schölermann resumed co-hosting the tabloid news magazine taff . A position he took on in early 2012. Schölermann is now irregular seen as replacement for Daniel Aminati. In 2013, he also agreed to host The Voice of Germany spin-off The Voice Kids [5]

Since January 2018, Schölermann hosts the German version of "Get The F*ck Out of My House" along with Julie Kilka. [6]

From 2018 until 2019, he was hosted with Lena Gercke the German version of The Voice Senior on Sat.1.

In an interview, Thore stated that he was an animal lover and that he had several pets during his childhood, including a pig. He is a forester and a hunter. Hunting has been one of his favorite pastimes over the course of his life. Most of all Thore loves horseback riding, and is good at training horses, too. He has taken part in several riding competitions over the years. [7] [8]

He is fluent in English.[ citation needed ]

Verbotene Liebe was a German television soap opera created by Reg Watson for Das Erste. The show was set primarily in the German city of Düsseldorf although, at times, the city of Cologne and the Spanish island of Mallorca figured prominently in the show's story lines. First broadcast on 2 January 1995, Verbotene Liebe was originally broadcast in 24-minute episodes, five times a week. It expanded to 45-minute episodes on 21 June 2011 and trimmed back to 40-minute episodes on 23 January 2012 to accommodate an adjusted time-slot. In 2006, Pay-TV network Passion began broadcasting episodes of the show from the beginning.

Joscha Kiefer is a German actor and best known for his role as Sebastian von Lahnstein on the soap opera Verbotene Liebe .

Christian Mann is a fictional character on German soap opera Verbotene Liebe . He is portrayed by actor Thore Schölermann from 27 November 2006. Schölermann was initially supposed to take a break after December 2012. However, it was later reported that the actor will not return full-time but in a limited capacity. 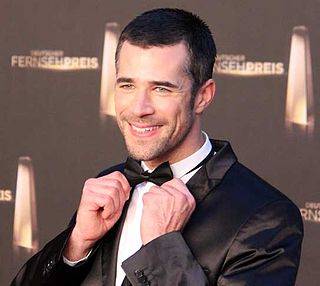 Johannes "Jo" Hermann Bruno Anton Weil is a German actor and television host, best known for his portrayals of Oliver Sabel on the long-running German serial Verbotene Liebe and titular bodyguard, Frank Farmer, in multiple productions of The Bodyguard stage musical, in Austria, Germany, and Switzerland.

Gregor von der Waldenau is a fictional character from the German soap opera Verbotene Liebe , portrayed by actor Andreas Jancke. He made his first appearance on screen on 16 February 2005 and left the show on 12 March 2010.

Isa Andersen is a German actress. She is best known for her role as Clarissa von Anstetten on Verbotene Liebe .

Stella Mann is a fictional character on the German soap opera Verbotene Liebe . The character was portrayed by model and actress Anne Wis from December 9, 2008 to November 10, 2009. She returned to the show with Claudia Hiersche as Carla von Lahnstein from January 28 to February 11, 2010.

Mascha Müller is a German actress and best known for her role as Luise von Waldensteyck on the soap opera Verbotene Liebe .

Nicola "Nico" von Lahnstein is a fictional character on the German soap opera Verbotene Liebe . The character is played by actress Verena Zimmermann, who made her first appearance on 1 October 2002. Much of the character's history revolves around her rebellious teenage years, being the illegitimate daughter of Johannes von Lahnstein, the deep connection shared with her sister Jana, her romance with Andi Fritzsche and marriage to Philipp zu Hohenfelden. 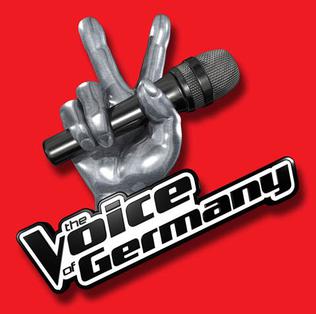 The Voice of Germany is a German reality talent show created by John de Mol, based on the concept The Voice of Holland and its international series. It began airing on ProSieben and Sat.1 on 24 November 2011.

Hagen von Lahnstein is a fictional character on the German soap opera Verbotene Liebe. The character has been played by Christoph Mory, after being introduced by Tom Viehöfer.

The Voice Kids is a German reality talent show created by John de Mol and a junior version of The Voice of Germany. Based on the original The Voice Kids of Holland, the show was developed for children between the ages of seven and fifteen years old. It began airing on Sat.1 on April 5, 2013.

The Voice of Germany is a German reality talent show that premiered its sixth season on October 20, 2016 on ProSieben and Sat.1. Based on the reality singing competition The Voice of Holland, the series was created by Dutch television producer John de Mol. It is part of an international series. The Judges for this season are Andreas Bourani, Samu Haber, Michi Beck & Smudo and Yvonne Catterfeld. The host(s) for this season will be Thore Schölermann and Lena Gercke.

The Voice Senior was a German reality talent show created by John de Mol, based on the concept The Voice of Germany. However, participation is only open for candidates of more than 60 years old. It began airing on December 23, 2018 on Sat.1, but after the second season the producers and the tv channel cancelled the show, due to low ratings.

The eleventh season of the talent show The Voice of Germany premiered on October 7, 2021 on ProSieben and on October 10, 2021 on Sat.1. Both singers and songwriters Mark Forster and Nico Santos returned as coaches for their fifth and second seasons, respectively, and two new coaches joined: singers and songwriters Johannes Oerding, and Sarah Connor, who replaced Samu Haber & Rea Garvey, and Stefanie Kloss & Yvonne Catterfeld. Elif Demirezer was the new "Comeback Stage" coach, who selected contestants to participate in The Voice: Comeback Stage by SEAT, replacing Michael Schulte. Thore Schölermann and Lena Gercke returned as hosts for their tenth and seventh seasons, respectively.

The twelfth season of the talent show The Voice of Germany will premiere on 18 August 2022 on ProSieben and on Sat.1. Mark Forster is set to return as coach for his sixth season. Rea Garvey and Stefanie Kloss, who last appeared on season 10, are set to return as coaches for their seventh and fourth seasons respectively, replacing Johannes Oerding and Sarah Connor. Peter Maffay is set to make his first appearance as a coach this season, replacing Nico Santos. Meanwhile, Thore Schölermann returned for his eleventh season as host, with Melissa Khalaj replacing Lena Gercke as the new host.

Wikimedia Commons has media related to Thore Schölermann .
This page is based on this Wikipedia article
Text is available under the CC BY-SA 4.0 license; additional terms may apply.
Images, videos and audio are available under their respective licenses.