Thorea is a genus of freshwater algae in the Phylum Rhodophyta (red algae). [1] Thorea is a small alga with filaments up to 200 cm long, dark green in colour and not red as are marine Rhodophyta. The filaments have only as few secondary branches.

Thorea is distributed throughout temperate and tropical regions. [2]

The first record of Thorea ramosissima in the British Isles is in Harvey's Manual (1841): [3] Found in a pool in a bog in the Co Donegal Mountains, going from Letterkenny to Dunfanaghy; July. These specimens are in the Ulster Museum (BEL: F42–F47), but proved to have been incorrectly identified and were specimens of Batrachospermum . [4] 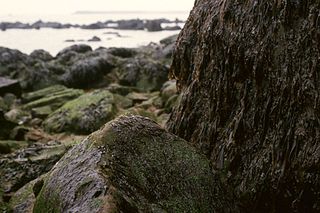 Porphyra is a coldwater seaweed that grows in cold, shallow seawater. More specifically, it belongs to red algae phylum of laver species, comprising approximately 70 species. It grows in the intertidal zone, typically between the upper intertidal zone and the splash zone in cold waters of temperate oceans. In East Asia, it is used to produce the sea vegetable products nori and gim. There are considered to be 60 to 70 species of Porphyra worldwide and seven around Britain and Ireland where it has been traditionally used to produce edible sea vegetables on the Irish Sea coast. Porphyra is a chief source of plant-based vitamin B12. 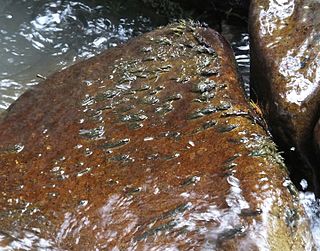 Lemanea is a genus of freshwater red algae, in the order Batrachospermales. Both species are considered to be widespread in the northern hemisphere. Although placed in the Rhodophyta it in fact is green in colour.

Atractophora hypnoides is a rare red alga (Rhodophyta) found in the British Isles, France and some Atlantic Islands and is the only species of the genus found in the British Isles. It is attached to the rock or other algae by a small basal disc and is much branched with downgrowing filaments which enclose the main branch or axis forming a cortex. Short filaments of limited growth radiate in whorls from the axis and frequently convert into hairs. The spreading filaments grow irregularly in a diffuse manner. Microscope examination is required for identification.

Schmitzia hiscockiana is a small, rare, red seaweed or marine alga of the phylum Rhodophyta or red algae. It was discovered and named in 1985.

Gastroclonium reflexum is a small red alga (Rhodophyta) reported from Ireland and Britain.

Polysiphonia is a genus of filamentous red algae with about 19 species on the coasts of the British Isles and about 200 species worldwide, including Crete in Greece, Antarctica and Greenland. Its members are known by a number of common names. It is in the order Ceramiales and family Rhodomelaceae.

Conceptacles are specialized cavities of marine and freshwater algae that contain the reproductive organs. They are situated in the receptacle and open by a small ostiole. Conceptacles are present in Corallinaceae, and Hildenbrandiales, as well as the brown Fucales. In the Fucales there is no haploid phase in the reproductive cycle and therefore no alternation of generations. The thallus is a sporophyte. The diploid plants produce male (antheridia) and female (oogonia) gametangia by meiosis. The gametes are released into the surrounding water; after fusion, the zygote settles and begins growth.

In algal anatomy, a pit connection is a hole in the septum between two algal cells, and is found only in the red algae − specifically, all orders except the Porphyridiales and haploid Bangiales. They are often stoppered with proteinaceous "pit plugs". By contrast, many fungi contain septal pores − an unrelated phenomenon.

Red algae, or Rhodophyta, are one of the oldest groups of eukaryotic algae. The Rhodophyta also comprises one of the largest phyla of algae, containing over 7,000 currently recognized species with taxonomic revisions ongoing. The majority of species (6,793) are found in the Florideophyceae (class), and mostly consist of multicellular, marine algae, including many notable seaweeds. Approximately 5% of the red algae occur in freshwater environments with greater concentrations found in warmer areas. Except for two coastal cave dwelling species in the asexual class Cyanidiophyceae, that diverged from other red algae about 1.3 billion years ago, there are no terrestrial species, which may be due to an evolutionary bottleneck where the last common ancestor lost about 25% of its core genes and much of its evolutionary plasticity.

Bangia is an extant genus of division Rhodophyta that grows in marine or freshwater habitats. Bangia has small thalli with rapid growth and high reproductive output, and exhibits behavior characteristic of r-selected species. The plants are attached by down-growing rhizoids, usually in dense purple-black to rust-colored clumps. The chloroplasts of Bangia, like others in the division Rhodophyta, contain chlorophyll a and sometimes chlorophyll d, as well as accessory pigments such as phycobilin pigments and xanthophylls. Depending on the relative proportions of these pigments and the light conditions, the overall color of the plant can range from green to red to purple to grey; however, the red pigment, phycoerythrin, is usually dominant.

Polysiphonia lanosa is a common species of the red algae (Rhodophyta) often to be found growing on Ascophyllum nodosum.

Polysiphonia elongella Harvey in W.J. Hooker is a branched species of marine red algae in the genus in the Polysiphonia in the Rhodophyta.

Melanothamnus harveyi, Harvey's siphon weed, is a small marine red alga in the division of Rhodophyta.

Ceramium botryocarpum is a small red marine alga in the Division Rhodophyta.

Ceramium ciliatum is a small marine red alga in the Division Rhodophyta. 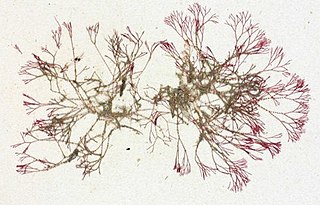 Ceramium cimbricum is a small red alga in the division Rhodophyta. 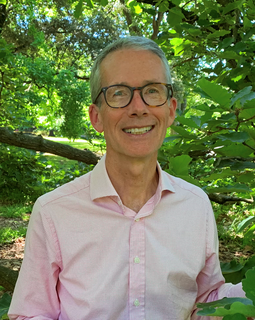 Timothy John Entwisle, is an Australian botanist, much of whose research work is in phycology (algae). See for example the articles. He was awarded a Ph.D. from La Trobe University in 1986 with work on the taxonomy of Vaucheria. He served for eight years as the director of the Royal Botanic Gardens Sydney, and since 2013 has been director of the Royal Botanic Gardens Victoria.