Thoricus or Thorikos (Ancient Greek : Θορικός) was a city, and later a deme in the southern portion of ancient Attica, one of the twelve original settlements that were united in the synoikismos attributed to Theseus to form Archaic Athens. It was later a deme of the phyle of Acamantis. Near it are the mines of Laurion, where lead and silver was mined from Neolithic times, and worked in the industrial quarter of the settlement. [1] There is a theatre dating from c. 525–480 BC. The modern site is Lavrio.

The site was inhabited from the Neolithic Age (4th millennium BC). Thoricus was the mining centre of the Laureotica. There is evidence of lead extraction from the Early Helladic period (3rd millennium BC) and of silver (now exhausted) from 1500 BC. [2] Mycenaean tholos tombs (15th century BC) and a Late Mycenaean installation (12th century BC), probably connected with the mines in the area, have been uncovered. The finds are housed in the National Archaeological Museum, Athens. [3]

It continued to be a place of importance during the flourishing period of Athenian history, as its existing remains prove, and was hence fortified by the Athenians in the 24th year of the Peloponnesian War. [4] It was 60 stadia away in distance from Anaphlystus upon the western coast. [5]

There were significant town walls and a postern. The town's harbour was to the south of the acropolis; the island of Makronisi (Macri) provides natural protection. [2] The settlement was destroyed by Sulla in 86 BC, and though it was reinhabited in Roman times, and visited by Pausanias, it was permanently abandoned in the 6th century's disorders.

Thoricus, in the Homeric Hymn to Demeter (probably 7th century BC) is mentioned by the goddess, who is disguised as an old woman, as her landing place when she had been unwillingly brought from Crete. Thoricus directly faces Crete to the south, across the open Aegean Sea. Thoricus is celebrated in mythology as the residence of Cephalus, whom Eos (Roman Aurora) carried off to dwell with the gods. [6] It has been conjectured by Christopher Wordsworth, with much probability, that the idea of Thoricus was associated in the Athenian mind with such a translation to the gods, and that the "Thorician stone" (Θορίκιος πέτρος) mentioned by Sophocles, [7] respecting which there has been so much doubt, probably has reference to such a migration, as the poet is describing a similar translation of Oedipus. Cephalus is also said to have died at Thoricus. [2]

The ancient city's centre and its acropolis are on Velatouri hill and the theatre (c. 525–480 BC) is a significant survival. The town was closely packed with irregular building of houses and smiths' workshops (many dating from the 7th–4th century BC). A small temple, perhaps dedicated to Hygieia, next to stoas with benches. There was an unusual Double Stoa built in the late 5th century BC. [8] Inscriptions have identified the large Doric temple (late 5th century BC) as a telesterion for the cult of Demeter and Kore, the "Maiden" her daughter Persephone. [3] The temple was initially explored by the Society of Dilettanti of London in 1817. In April 1886, Walter Miller conducted the first modern excavation of the site, seeking the theatre. [9] Modern archaeology here has been largely connected with the Belgian School in Athens. [10]

An acropolis was the settlement of an upper part of an ancient Greek city, especially a citadel, and frequently a hill with precipitous sides, mainly chosen for purposes of defense. The term is typically used to refer to the Acropolis of Athens, yet every Greek city had an acropolis of their own. Acropolises were used as religious centers and places of worship, forts, and places in which the royal and high-status resided in. Acropolises became the nuclei of large cities of classical ancient times, and served as important centers of a community. Some well-known acropolises have become the centers of tourism in present-day, and, especially, the Acropolis of Athens has been a revolutionary center for the studies of ancient Greece since the Mycenaean period. Many of them have become a source of revenue for Greece, and represent some great technology during the period. 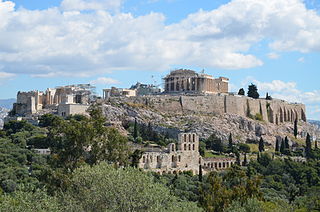 The Acropolis of Athens is an ancient citadel located on a rocky outcrop above the city of Athens and contains the remains of several ancient buildings of great architectural and historical significance, the most famous being the Parthenon. The word acropolis is from the Greek words ἄκρον and πόλις. The term acropolis is generic and there are many other acropoleis in Greece. During ancient times the Acropolis of Athens was known also more properly as Cecropia, after the legendary serpent-man, Cecrops, the supposed first Athenian king.

Aegean civilization is a general term for the Bronze Age civilizations of Greece around the Aegean Sea. There are three distinct but communicating and interacting geographic regions covered by this term: Crete, the Cyclades and the Greek mainland. Crete is associated with the Minoan civilization from the Early Bronze Age. The Cycladic civilization converges with the mainland during the Early Helladic ("Minyan") period and with Crete in the Middle Minoan period. From c. 1450 BC, the Greek Mycenaean civilization spreads to Crete, probably by military conquest. 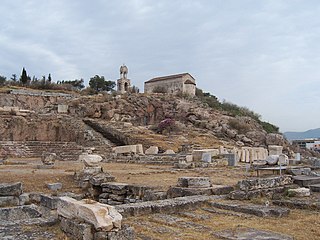 Eleusis is town and municipality in West Attica Regional unit in Greece. It is located in the Thriasian Plain, at the northernmost end of the Saronic Gulf. North of Eleusis are Mandra and Magoula, while Aspropyrgos is to the northeast. 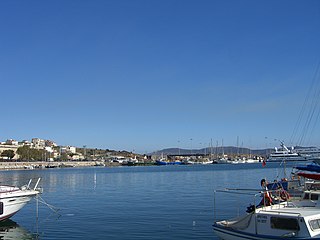 Laurium or Lavrio is a town in southeastern part of Attica, Greece and the seat of the municipality of Lavreotiki. Laurium was famous in Classical antiquity for its silver mines. The metallic silver was mainly used for coinage. The Archaeological Museum of Lavrion shows much of the story of these mines. 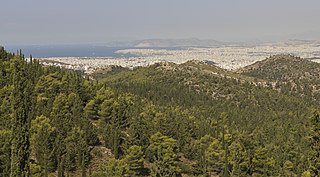 Attica, or the Attic peninsula, is a historical region that encompasses the city of Athens, the capital of Greece and its countryside. It is a peninsula projecting into the Aegean Sea, bordering on Boeotia to the north and Megaris to the west. The southern tip of the peninsula, known as Laurion, was an important mining region. 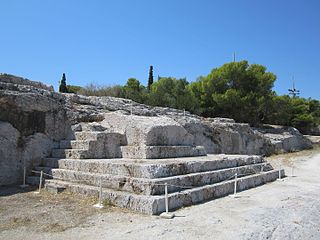 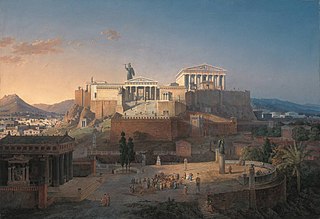 Athens is one of the oldest named cities in the world, having been continuously inhabited for perhaps 5,000 years. Situated in southern Europe, Athens became the leading city of Ancient Greece in the first millennium BC, and its cultural achievements during the 5th century BC laid the foundations of Western civilization. 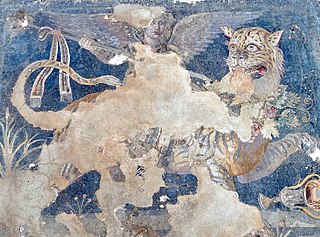 The Dionysia was a large festival in ancient Athens in honor of the god Dionysus, the central events of which were the theatrical performances of dramatic tragedies and, from 487 BC, comedies. It was the second-most important festival after the Panathenaia. The Dionysia actually consisted of two related festivals, the Rural Dionysia and the City Dionysia, which took place in different parts of the year. They were also an essential part of the Dionysian Mysteries.

Cape Sounion is the promontory at the southernmost tip of the Attic peninsula, 8 kilometres (5.0 mi) south of the town of Lavrio, and 69.5 km southeast of Athens. It is part of Lavreotiki municipality, East Attica, Greece. 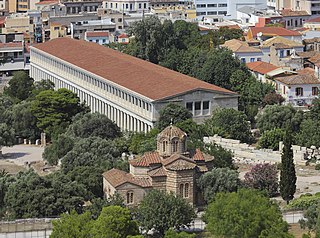 The Stoa of Attalos was a stoa in the Agora of Athens, Greece. It was built by and named after King Attalos II of Pergamon, who ruled between 159 BC and 138 BC. The current building was reconstructed from 1952 to 1956 by the American School of Classical Studies at Athens and currently houses the Museum of the Ancient Agora. 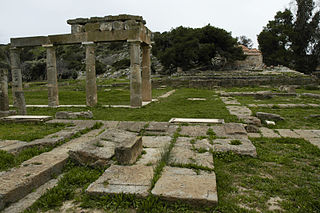 Brauron was one of the twelve cities of ancient Attica, but never mentioned as a deme, though it continued to exist down to the latest times. It was situated on or near the eastern coast of Attica, between Steiria and Halae Araphenides, near the river Erasinus. Brauron is celebrated on account of the worship of Artemis Brauronia, in whose honour a festival was celebrated in this place. 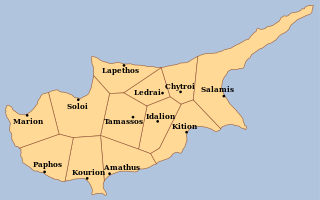 Marion was one of the Ten city-kingdoms of Cyprus. It was situated in the north-west of the island in the Akamas region, close to or under the present town of Polis. Both Strabo and Pliny the Elder mention the city in their writings. 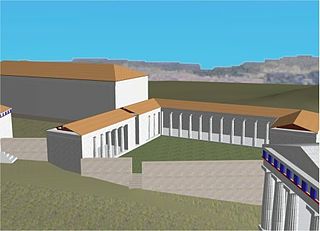 The Brauroneion was the sanctuary of Artemis Brauronia on the Athenian Acropolis, located in the southwest corner of the Acropolis plateau, between the Chalkotheke and the Propylaea in Greece. It was originally dedicated during the reign of Peisistratos. Artemis Brauronia, protector of women in pregnancy and childbirth, had her main sanctuary at Brauron, a demos on the east coast of Attica. 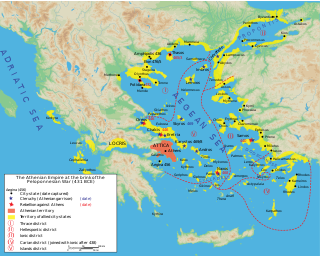 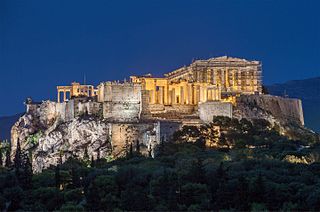 The following outline is provided as an overview of and topical guide to ancient Greece: 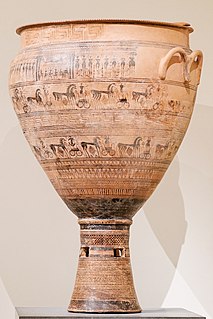 Euonymeia, also known by its medieval name Trachones, and by its modern colloquial Ano Kalamaki, is a historic settlement in Athens and currently a residential neighborhood within the municipality of Alimos on the southern suburbs of Athens, Greece. The area is an inland part of the south Athenian plain, situated between the foothills of Mount Hymettus and the southern coastal zone of Athens on the Saronic Gulf. The land is characterized by limestone hills and streams running from Hymettus toward the coast. Situated 7 kilometres (4.3 mi) south of the center of Athens, Euonymeia has been developed and incorporated into the urban sprawl of the Greek capital. 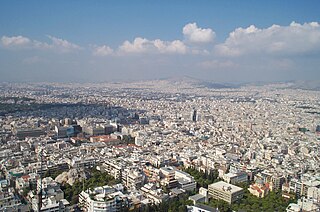 The following outline is provided as an overview of and topical guide to Athens: 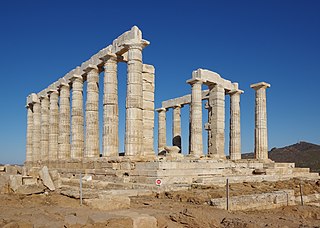 The Temple of Poseidon is an ancient Greek temple on Cape Sounion, Greece, dedicated to the god Poseidon. There is evidence of the establishment of sanctuaries on the cape from as early as the 11th century B.C. Sounion’s most prominent temples, the Temple of Athena and the Temple of Poseidon, are however not believed to have been built until about 700 B.C., and their kouroi date from about one hundred years later. The material and size of the offerings at the Temple of Poseidon indicate that it was likely frequented by members of the elite and the aristocratic class.