The Challenger Deep is the deepest known point in the Earth's seabed hydrosphere, with a depth of 10,902 to 10,929 m by direct measurement from deep-diving submersibles, remotely operated underwater vehicles and benthic landers and (sometimes) slightly more by sonar bathymetry.

The Mariana Trench or Marianas Trench is located in the western Pacific Ocean about 200 kilometres (124 mi) east of the Mariana Islands; it is the deepest oceanic trench on Earth. It is crescent-shaped and measures about 2,550 km (1,580 mi) in length and 69 km (43 mi) in width. The maximum known depth is 10,984 metres (36,037 ft) at the southern end of a small slot-shaped valley in its floor known as the Challenger Deep. However, some unrepeated measurements place the deepest portion at 11,034 metres (36,201 ft). If Mount Everest were placed into the trench at this point, its peak would still be under water by more than two kilometres (1.2 mi).

A seamount is a large geologic landform that rises from the ocean floor but that does not reach to the water's surface, and thus is not an island, islet or cliff-rock. Seamounts are typically formed from extinct volcanoes that rise abruptly and are usually found rising from the seafloor to 1,000–4,000 m (3,300–13,100 ft) in height. They are defined by oceanographers as independent features that rise to at least 1,000 m (3,281 ft) above the seafloor, characteristically of conical form. The peaks are often found hundreds to thousands of meters below the surface, and are therefore considered to be within the deep sea. During their evolution over geologic time, the largest seamounts may reach the sea surface where wave action erodes the summit to form a flat surface. After they have subsided and sunk below the sea surface such flat-top seamounts are called "guyots" or "tablemounts".

The giant squid is a species of deep-ocean dwelling squid in the family Architeuthidae. It can grow to a tremendous size, offering an example of deep-sea gigantism: recent estimates put the maximum size at around 12–13 m (39–43 ft) for females and 10 m (33 ft) for males, from the posterior fins to the tip of the two long tentacles. The mantle of the giant squid is about 2 m long, and the length of the squid excluding its tentacles rarely exceeds 5 m (16 ft). Claims of specimens measuring 20 m (66 ft) or more have not been scientifically documented. 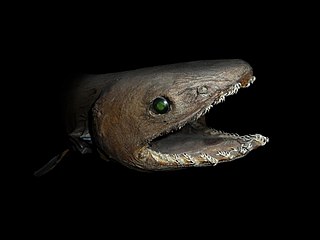 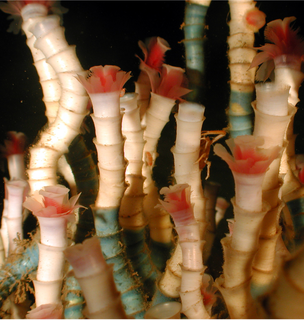 A cold seep is an area of the ocean floor where hydrogen sulfide, methane and other hydrocarbon-rich fluid seepage occurs, often in the form of a brine pool. Cold does not mean that the temperature of the seepage is lower than that of the surrounding sea water. On the contrary, its temperature is often slightly higher. The "cold" is relative to the very warm conditions of a hydrothermal vent. Cold seeps constitute a biome supporting several endemic species.

The pelagic zone consists of the water column of the open ocean, and can be further divided into regions by depth, as illustrated on the right. The word "pelagic" is derived from Ancient Greek πέλαγος (pélagos) 'open sea'. The pelagic zone can be thought of in terms of an imaginary cylinder or water column that goes from the surface of the sea almost to the bottom. Conditions in the water column change with distance from the surface (depth): the pressure increases; the temperature and amount of light decreases; the salinity and amount of dissolved oxygen, as well as micronutrients such as iron, magnesium and calcium, all change. 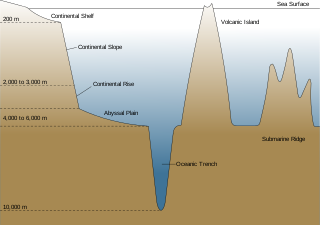 An abyssal plain is an underwater plain on the deep ocean floor, usually found at depths between 3,000 metres (9,800 ft) and 6,000 metres (20,000 ft). Lying generally between the foot of a continental rise and a mid-ocean ridge, abyssal plains cover more than 50% of the Earth's surface. They are among the flattest, smoothest, and least explored regions on Earth. Abyssal plains are key geologic elements of oceanic basins.

Kaikō was a remotely operated underwater vehicle (ROV) built by the Japan Agency for Marine-Earth Science and Technology (JAMSTEC) for exploration of the deep sea. Kaikō was the second of only five vessels ever to reach the bottom of the Challenger Deep, as of 2019. Between 1995 and 2003, this 10.6 ton unmanned submersible conducted more than 250 dives, collecting 350 biological species, some of which could prove to be useful in medical and industrial applications. On 29 May 2003, Kaikō was lost at sea off the coast of Shikoku Island during Typhoon Chan-Hom, when a secondary cable connecting it to its launcher at the ocean surface broke.

The Lisbon Oceanarium is an oceanarium in Lisbon, Portugal. It is located in the Parque das Nações, which was the exhibition grounds for the Expo '98. It is the largest indoor aquarium in Europe.

The hadal zone, also known as the hadopelagic zone, is the deepest region of the ocean lying within oceanic trenches. The hadal zone is found from a depth of around 6,000 to 11,000 metres, and exists in long but narrow topographic V-shaped depressions. 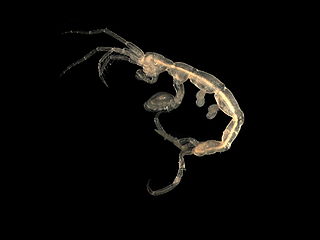 Caprellidae is a family of amphipods commonly known as skeleton shrimps. Their common name denotes the threadlike slender body which allows them to virtually disappear among the fine filaments of seaweed, hydroids and bryozoans. They are sometimes also known as ghost shrimps. Caprellidae contains 88 genera in three subfamilies. 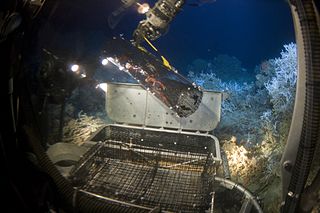 Deep-sea exploration is the investigation of physical, chemical, and biological conditions on the sea bed, for scientific or commercial purposes. Deep-sea exploration is considered a relatively recent human activity compared to the other areas of geophysical research, as the depths of the sea have been investigated only during comparatively recent years. The ocean depths still remain a largely unexplored part of the planet, and form a relatively undiscovered domain. 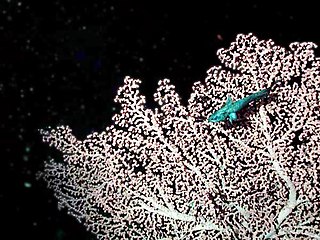 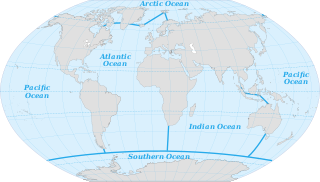 An ocean is a body of water that composes much of a planet's hydrosphere. On Earth there is the world ocean, a system of five oceans. These are, in descending order by area, the Pacific, Atlantic, Indian, Southern (Antarctic), and Arctic Oceans. 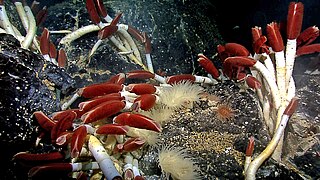 A deep sea community is any community of organisms associated by a shared habitat in the deep sea. Deep sea communities remain largely unexplored, due to the technological and logistical challenges and expense involved in visiting this remote biome. Because of the unique challenges, it was long believed that little life existed in this hostile environment. Since the 19th century however, research has demonstrated that significant biodiversity exists in the deep sea.

Caprella mutica, commonly known as the Japanese skeleton shrimp, is a species of skeleton shrimp. They are relatively large caprellids, reaching a maximum length of 50 mm (2.0 in). They are sexually dimorphic, with the males usually being much larger than the females. They are characterized by their "hairy" first and second thoracic segments and the rows of spines on their bodies. Body color ranges from green to red to blue, depending on the environment. They are omnivorous highly adaptable opportunistic feeders. In turn, they provide a valuable food source for fish, crabs, and other larger predators. They are usually found in dense colonies attached to submerged man-made structures, floating seaweed, and other organisms. 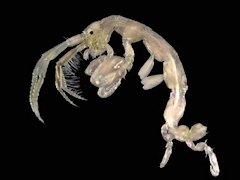 Caprella equilibra is a species of skeleton shrimp in the family Caprellidae. It lives among other organisms on the seabed and occurs in both shallow and deep water in many parts of the world.