Thorington is a village and a civil parish in the hundred of Blything, in the Suffolk Coastal District of the English county of Suffolk. It is located around 3 miles (4.8 km) south-east of the town of Halesworth, immediately south of the village of Wenhaston. The A12 main road runs through the parish to the east of the village. Thorington Hall was demolished in 1949. [1]

Church Farm Marshes is a nature reserve located in the parish. It consists of an area of meadow and marshland 31 hectares (77 acres) in size along a tributary of the River Blyth. [2] The reserve is owned and managed by Suffolk Wildlife Trust and is designated as a County Wildlife Site. [2]

Suffolk Coastal was a local government district in Suffolk, England. Its council was based in Melton, having moved from neighbouring Woodbridge in 2017. Other towns include Felixstowe, Framlingham, Leiston, Aldeburgh, and Saxmundham.

Darsham is a village in Suffolk, England. It is located approximately 4 miles (6 km) north east of Saxmundham. The village is bypassed by the A12 and is served by Darsham railway station, which is approximately one mile away from the village centre, on the Ipswich-Lowestoft East Suffolk Line. 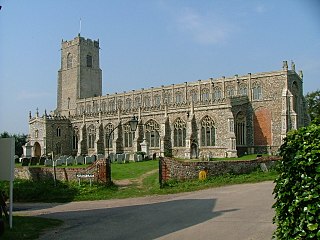 Blythburgh is a village and civil parish in the East Suffolk district of the English county of Suffolk. It is 4 miles (6.4 km) west of Southwold and 5 miles (8.0 km) south-east of Halesworth and lies on the River Blyth. The A12 road runs through the village which is split either side of the road. At the 2011 census the population of the parish was 297. The parish includes the hamlets of Bulcamp and Hinton.

Blaxhall is a village and civil parish in the East Suffolk district of the English county of Suffolk. Located around 8 miles (13 km) south-west of Leiston and Aldeburgh, in 2007 its population was estimated to be 220, measured at 194 in the 2011 Census.

Wissett is a village and civil parish in the East Suffolk district of Suffolk, England located at 52.35N 01.46E TM3679 about 2 km northwest of Halesworth. Historically, it was in the hundred of Blything. It has a population of about 200, measured at 268 in the 2011 Census.

Holton is a village and civil parish in the East Suffolk district, in the county of Suffolk, England, near the town of Halesworth, with a population of around 1,100, measured at 832 in the 2011 Census. Holton is split into two parts — Upper Holton and Holton.

Hertford Heath is a small village and civil parish near the county town of Hertford in Hertfordshire, England. The population at the 2011 Census was 2,672.

Lound is a village and civil parish in the north of the English county of Suffolk. It is in the East Suffolk district and part of the area known as Lothingland between Lowestoft and Great Yarmouth. Lound lies 4.5 miles (7.2 km) north of Lowestoft, 5 miles (8.0 km) south of Great Yarmouth and 2 miles (3.2 km) west of Hopton on Sea and the North Sea coast. The village lies just west of the main A12 dual carriageway between Great Yarmouth and Lowestoft.

Sotherton is a dispersed village and civil parish in the East Suffolk district, in the county of Suffolk, England, located approximately 7 miles (11 km) south of Beccles and 3 3⁄4 miles (6.0 km) north east of Halesworth close to the A145. The mid-2005 population estimate for Sotherton parish was 70. Uggeshall is located just to the north-east and Blythburgh to the south-east. Latitude Festival takes place a couple of miles west.

Thorington Street is a large hamlet on the B1068 road, in the Babergh district, in the English county of Suffolk. The hamlet is part of the civil parish of Stoke-by-Nayland, and is located in between the villages of Stoke-by-Nayland and Higham. 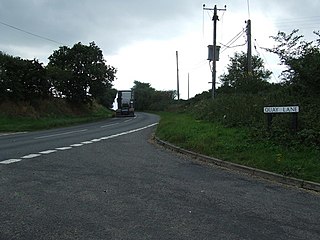 The A1095 road is an A road in the English county of Suffolk. It runs from Southwold on the North Sea coast to the A12 London to Lowestoft road at Henham between Blythburgh and Wangford. It is around 4 miles (6.4 km) in length and is single carriageway throughout. The entire length of the road lies within the Suffolk Coast and Heaths Area of Outstanding Natural Beauty. 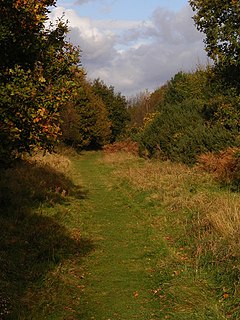 Dunwich Forest is an area of forest and lowland heath around 1 mile (1.6 km) north-east of the village of Dunwich in the English county of Suffolk. The forest covers an area of around 9 square kilometres and was originally planted by the Forestry Commission. The forest is within the Suffolk Coast and Heaths Area of Outstanding Natural Beauty and is in the area known as the Suffolk Sandlings. South of the reserve is the National Trust property of Dunwich Heath, one of the largest remaining areas of lowland heath on the Suffolk coast, and the RSPB reserve at Minsmere. To the north and east of the forest are Dingle Marshes, part of the Suffolk Coast National Nature Reserve. 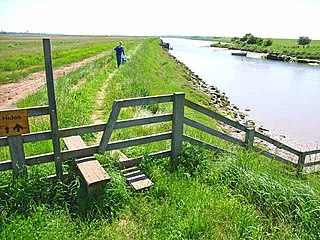 Hen Reedbeds is a 55 hectare nature reserve near the North Sea coast of the English county of Suffolk. The reserve is located in the Blyth valley between Reydon and Blythburgh, approximately 2.5 miles (4.0 km) west of Southwold. The marshes make up part of the Suffolk Coast National Nature Reserve along with reserves at Walberswick and Dingle Marshes.

Suffolk Coast National Nature Reserve is a wildlife reserve on the North Sea coast of the English county of Suffolk. It is located around the village of Walberswick to the south of the town of Southwold. The reserve was designated in 2003, combining the existing Walberswick National Nature Reserve with reserves at Dingle Marshes and Hen Reedbeds to create a 1,340 hectares reserve.

Minsmere–Walberswick Heaths and Marshes are a Special Area of Conservation and Site of Special Scientific Interest in the English county of Suffolk. The site is located on the North Sea coast between Southwold and Sizewell, extending over an area of coastline around 7 miles (11 km) in length. The site is also designated as a Special Protection Area, part of the Minsmere–Walberswick European Marine Site and contains areas designated as Ramsar sites and Natura 2000 sites. It lies within the Suffolk Coast and Heaths Area of Outstanding Natural Beauty and is made up of a "complex mosaic" of marshes, reed beds, shingle banks and lowland heath habitats. 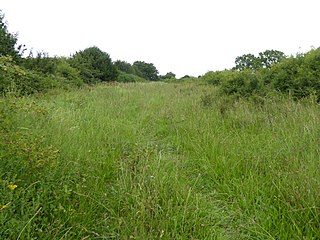 Black Bourn Valley, formerly called Grove Farm, is an 88 hectare nature reserve between Thurston and Elmswell in Suffolk. It is managed by the Suffolk Wildlife Trust.

Church Farm Marshes is a 56 hectare nature reserve in Thorington in Suffolk. It is managed by the Suffolk Wildlife Trust.