Thornapple is an unincorporated community located in the town of Thornapple, Rusk County, Wisconsin, United States. [1]

Thornapple may refer to:

Rusk County is a county in the U.S. state of Wisconsin. As of the 2010 census, the population was 14,755. Its county seat is Ladysmith. 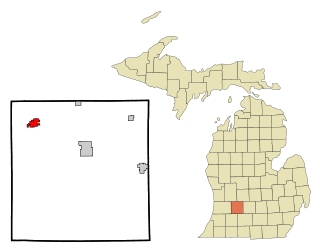 Middleville is a village in Thornapple Township, Barry County in the U.S. state of Michigan and part of the Grand Rapids Metropolitan area. The population was 3,319 at the 2010 census.

Thornapple Township is a civil township of Barry County in the U.S. state of Michigan. The population was 7,884 at the 2010 census. It is the most populous township in Barry County.

Ada Township is a General Law Township within Kent County, Michigan, United States. Starting with a fur trading post of the late 18th century, the township in the late 20th century developed residential and retail areas during suburbanization around Grand Rapids. As of the 2010 census, the township population was 13,142, up from 9,882 at the 2000 census. Ada is the corporate home of Alticor and its subsidiary companies Quixtar and Amway. 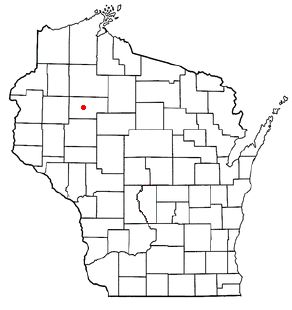 Thornapple is a town in Rusk County, Wisconsin, United States. The population was 811 at the 2000 census. The unincorporated community of Thornberry is located in the town.

The Thornapple River is an 88.1-mile-long (141.8 km) tributary of Michigan's longest river, the Grand River. The Thornapple rises in Eaton County, Michigan and drains a primarily rural farming area in Central Michigan. It joins the Grand in Ada, Michigan, 10 miles (16 km) east of Grand Rapids.

The Flambeau River is a tributary of the Chippewa River in northern Wisconsin, United States. The Chippewa is in turn a tributary of the upper Mississippi River. The Flambeau drains an area of 1,860 square miles (4,800 km2) and descends from an elevation of approximately 1,570 feet (480 m) to 1,060 feet (320 m) above sea level. The Flambeau is an important recreational destination in the region. It is notable among canoeists in the Midwest for outstanding canoe camping, including excellent scenery, fishing and whitewater. The river and its forks have a variety of possible trip lengths from short day outings, to overnight camping, to voyages of a week or more.

The Paul Henry Rail Trail is a rail trail in Kent County, Michigan. Originally running from 44th Street SE and Kalamazoo Ave. SE in a southeasterly direction to 60th street, the trail now connects with both the Thornapple Trail and Kent Trails. It has a 10-foot (3.0 m) wide paved surface. It is part of the North Country National Scenic Trail. The trail connects with the Frederik Meijer Trail at Wing Avenue in Kentwood. Extensions of the trail are planned. One portion of the trail, known as the Thornapple trail, begins in Middleville, Michigan, and continues south along the Thornapple River.

The Thornapple Trail is the abbreviated name for the a partially completed Paul Henry-Thornapple Trail in west Michigan. The Middleville portion is being connected to the Kent County section which will eventually link to Kent Trails. When complete, the Paul Henry - Thornapple Trail will be a 42-mile multi-use recreation trail running from Grand Rapids, Michigan to Vermontville, Michigan.

Little Thornapple River may refer to:

The Thornapple River is a river in Michigan.

Thornapple River is a river in Sawyer and Rusk counties in the U.S. state of Wisconsin.

Little Thornapple River is a 9.1-mile-long (14.6 km) river in Eaton County in the U.S. state of Michigan.

Little Thornapple River is a 5.8-mile-long (9.3 km) river in Barry County in the U.S. state of Michigan.