Thornden Park is a 76-acre (31 ha) park in Syracuse, New York, United States, which is the second largest in the city after Burnet Park. It was purchased by the city in 1921 and has become a favorite wedding location in the Syracuse park system. [2] It is located in Westcott, and borders the University and University Hill neighborhoods. The park was listed on the National Register of Historic Places in 1994 [1] as part of the Historic Designated Landscapes of Syracuse, New York. [3]

Thornden Park began as a farm owned by Zebulon Ostrom, who sold it to a wealthy salt miner James P. Haskins around 1850. In 1921 the city purchased the land as part of the nationwide City Beautiful movement and added recreational features such as the ballfields and swimming pool. [3] During the 1960s, budget cuts threatened the cleanliness of the park; these were countered by neighborhood initiatives. The 1970s brought Dutch elm disease, which killed approximately 600 elm trees in the park. Maple trees were planted as replacements. The Thornden Park Association was founded in 1983 to advocate for, restore and revitalize the park.

One of the more popular attractions in the park is the E. M. Mills Memorial Rose Garden, dedicated in 1924 on 2 acres (8,100 m2) at the southwest entrance to the park, across Ostrom Avenue from Syracuse University. Since 1970, the Syracuse Rose Society has maintained the garden in cooperation with the City of Syracuse Department of Parks, Recreation & Youth Programs. [4] Currently, the garden hosts 368 different varieties of roses (3850 plants in all) that surround a central gazebo. [5]

Originally named Sylvn Theatre, Thornden Park's amphitheater was built in 1933 under the Roosevelt era WPA Project (Works Project Administration). The opening day ceremony in 1933 was rained out but the subsequent opening was attended by 10,000 people. It is built to seat 6,000 people in its concentric rings and open lawn in the middle of the amphitheater. The Syracuse Opera puts on a free show the first Sunday in August each year.[ citation needed ] Since 2003, the Syracuse Shakespeare Festival has presented its free, Shakespeare-in-the-Park program, currently the first two weekends of June.[ citation needed ]

(Depictions of the history and selected features of Thornden Park, on the exterior of the pool building.) 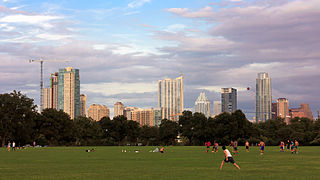 Zilker Metropolitan Park is a recreational area in south Austin, Texas at the juncture of Barton Creek and the Colorado River that comprises over 350 acres (142 ha) of publicly owned land. It is named after its benefactor, Andrew Jackson Zilker, who donated the land to the city in 1917. The land was developed into a park during the Great Depression in the 1930s. Today the park serves as a hub for many recreational activities and the hike and bike trail around Lady Bird Lake, both of which run next to the park. The large size of the park makes it a capable venue for large-scale events such as the Austin City Limits Music Festival and the Zilker Park Kite Festival. The park was listed in the National Register of Historic Places in 1997. 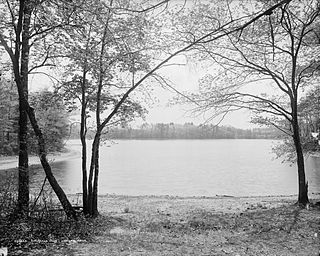 Walden Pond is a pond in Concord, Massachusetts, in the United States. A famous example of a kettle hole, it was formed by retreating glaciers 10,000–12,000 years ago. The pond is protected as part of Walden Pond State Reservation, a 335-acre (136 ha) state park and recreation site managed by the Massachusetts Department of Conservation and Recreation. The reservation was designated a National Historic Landmark in 1962 for its association with the writer Henry David Thoreau (1817–1862), whose two years living in a cabin on its shore provided the foundation for his famous 1854 work, Walden; or, Life in the Woods. The National Historic Preservation Act of 1966 ensured federal support for the preservation of the pond.

Victoria Park is a 9-hectare (22-acre) urban park situated on the corner of Parramatta Road and City Road, Camperdown, in the City of Sydney, New South Wales, Australia. The park is located adjacent to The University of Sydney and the Broadway Shopping Centre.

The Gardens at Elm Bank, home of Massachusetts Horticultural Society, occupies 36 acres (15 ha) of Elm Bank Reservation, a 175-acre (71 ha) recreational area of woodlands, fields, and former estate property on the Charles River managed by the Massachusetts Department of Conservation and Recreation. The estate's entrance is located at 900 Washington Street, Wellesley, Massachusetts, United States, with the major portion of the grounds located in the neighboring town of Dover. In 1987, the entire site was added to the National Register of Historic Places as Elm Bank. 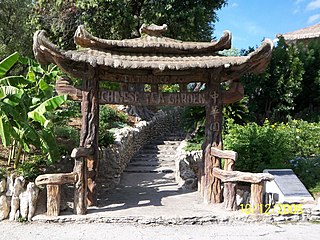 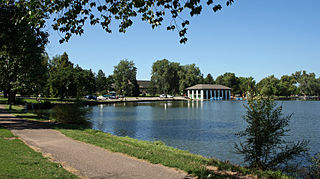 Washington Park is a neighborhood and public urban park in Denver, Colorado. The Washington Park located in Denver, Colorado, United States is a blend of historic and contemporary styles of architecture. Its historic buildings, lakes, tennis courts, lawns, large flower gardens, and recreation center provide various experiences for visitors. The park was first developed by Architect Reinhard Scheutze in 1899. Its design was influenced by city planner Kessler, the Olmsted Brothers and the famous philanthropist “The Unsinkable” Molly Brown. The park is very popular both as a tourist destination and among Denver locals, with some comparing it to New York City's Central Park. Apart from activities like jogging, walking or biking, the park serves as a center for social activities and encourages community involvement. Due to its welcoming appearance and unique characteristics, the Washington Park was designated as one of the “Great Public Spaces in America” by the American Planning Association in the year 2012.

Huntington is home to eleven parks located in the neighborhoods of Huntington. An amusement park is also adjacent to the city.

Crotona Park is a public park in the South Bronx in New York City, covering 127.5 acres (51.6 ha). The park is bounded by streets of the same name on its northern, eastern, southern, and western borders, and is adjacent to the Crotona Park East and Morrisania neighborhoods of the Bronx. It is divided into four portions by Claremont Parkway and Crotona Avenue, which run through it. 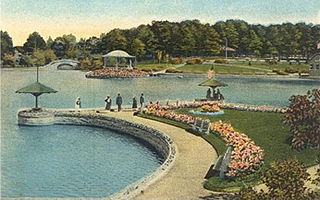 Onondaga Park is an 82.6-acre (33.4 ha) park in the city of Syracuse, New York. Man-made Hiawatha Lake is located within the park, which is situated in Syracuse's Strathmore neighborhood on the city's south side.

Stony Brook Reservation is a woodland park in Boston and Dedham, Massachusetts, a unit of the Metropolitan Park System of Greater Boston, part of the state park system of Massachusetts. It was established in 1894 as one of the five original reservations created by the Metropolitan Park Commission. The park is served by the Stony Brook Reservation Parkways, a road system that was entered into the National Register of Historic Places in 2006.

Patton Park is a 93-acre (38 ha) park located on the southwest side of Detroit, Michigan. The park, named for the World War II US military leader General George S. Patton, was dedicated in the early 1950s. Local landowner Jacques Baby bequeathed the 93-acre (38 ha) tract of land to the City of Detroit for a park. The park retains a restrictive covenant that prohibits the City from tampering with the park, lest the park return to Baby's descendants.

Untermyer Park and Gardens is a historic 43-acre (17 ha) city public park, located in Yonkers, New York in Westchester County, just north of New York City. The park is a remnant of Samuel J. Untermyer's 150-acre (61 ha) estate "Greystone". Situated on the steep land arising from the eastern bank of the Hudson River to the bluff on top of it, the park features a Walled Garden inspired by ancient IndoPersian gardens, a small Grecian-style open-air amphitheater with two facing sphynxes supported by tall Ionic columns, a classical pavilion, stoa and loggias, a rock-and-water feature called the "The Temple of Love", as well as a long staircase from the Walled Garden to an Overlook with views of the river and the Palisades.

Peninsula Park is a public park in the Piedmont neighborhood of Portland, Oregon, United States. The 16.27-acre (6.58 ha) park is located in the North Portland neighborhood and contains an outdoor swimming pool, community center, baseball fields, playgrounds, basketball courts, tennis courts, covered picnic areas, a historic gazebo and other amenities. In 2007, area residents started to propose a piece of public art be added to the park honoring Rosa Parks, as the park lies along Rosa Parks Way. 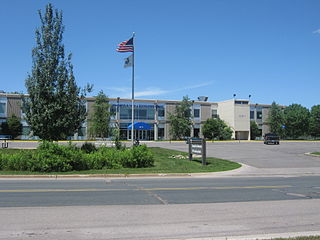 The Minneapolis Park and Recreation Board (MPRB) is an independent park district that owns, maintains, and programs activities in public parks in Minneapolis, Minnesota, United States. It has 500 full-time and 1,300 part-time employees and an $111 million operating and capital budget.

Sunset Park is a 24.5-acre (9.9 ha) public park in the neighborhood of Sunset Park, Brooklyn, New York City, between 41st and 44th Streets and 5th and 7th Avenues. The modern-day park contains a playground, recreation center, and pool. The recreation center and pool comprise the Sunset Play Center, which was designated as both an exterior and interior landmark by the New York City Landmarks Preservation Commission. The park is operated by the New York City Department of Parks and Recreation, also known as NYC Parks.