Thornton's Bookshop (locally known as Thornton's) was the oldest university bookshop in Oxford, England. It was founded in 1835 by Joseph Thornton (1808–1891) in Magdalen Street. [1]

From 1870 the bookshop was located at 11 Broad Street (opposite Balliol College), continued as a family business by five generations of the Thornton family and from 1983 by the Meeuws family, but closed at the end of 2002. [1] The business continues to sell via the Internet and mail order from Faringdon, about 18 miles from Oxford.

The shop premises on Broad Street were frequently used for television adaptations like Brideshead Revisited ,[ citation needed ] and the last Inspector Morse episode The Remorseful Day . [2]

Indica Gallery was a counterculture art gallery in Mason's Yard, St James's, London during the late 1960s, in the basement of the Indica Bookshop. John Dunbar, Peter Asher, and Barry Miles owned it, and Paul McCartney supported it and hosted a show of Yoko Ono's work in November 1966 at which Ono met John Lennon.

Oxford Road is a major arterial road in Reading, Berkshire, England, Beginning near the town centre at the meeting of St. Mary's Butts/West Street/Broad Street. The road leads west to Pangbourne, continuing eventually to the city of Oxford. The road was previously known as Pangbourne Lane. 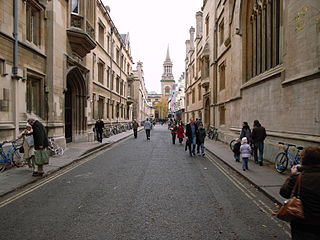 Turl Street is a historic street in central Oxford, England.

Dillons was a British bookshop founded in 1932, named after its founder and owner Una Dillon. Based on Gower Street, London, the bookshop expanded under subsequent owners Pentos plc in the 1980s into a bookselling chain across the United Kingdom, before being sold to Thorn EMI and then spun off into HMV Group. The brand was subsumed under rival chain Waterstones' branding in 1999, at which point the brand ceased to exist.

Merton Street tennis court is the home of the Oxford University Real Tennis Club. It stands on the north side of Merton Street in central Oxford, England, and forms part of Merton College.

Broad Street is a wide street in central Oxford, England, just north of the former city wall. The street is known for its bookshops, including the original Blackwell's bookshop at number 50, located here due to the University. Locally the street is traditionally known as The Broad.

Macdonald Randolph Hotel is a hotel in Oxford, England. It is in central Oxford on the south side of Beaumont Street, at the corner with Magdalen Street, opposite the Ashmolean Museum and close to the Oxford Playhouse. The hotel's architecture is Victorian Gothic in style.

Parks Road is a road in Oxford, England, with several Oxford University colleges along its route. It runs north-south from the Banbury Road and Norham Gardens at the northern end, where it continues into Bradmore Road, to the junction with Broad Street, Holywell Street and Catte Street to the south.

Magdalen Street is a short shopping street in central Oxford, England, just north of the original north gate in the city walls. Traditionally, the name of the street is pronounced and not as the name of the College, which is always.

Oriel Square, formerly known as Canterbury Square is a square in central Oxford, England, located south of the High Street. The name was changed after the Second World War at the request of Oriel College which maintained that the square had originally been known as Oriel Square.

Catte Street is a historic street in central Oxford, England.

Brasenose Lane runs east-west in central Oxford, England, between Radcliffe Square and Turl Street. It is accessible only to pedestrians at its west end, but vehicles can enter from Radcliffe Square. The lane retains the medieval pattern of a single drainage channel in its centre and has high stone-faced college buildings on each side, being flanked by three historic Oxford colleges.

Ship Street is a short street in central Oxford, England that runs east–west.

Boswells of Oxford is the largest independent family-run department store in Oxford, England. It has been reported that the store will close in 2020.

Joseph Thornton was a bookseller who founded Thornton's Bookshop in 1835 in Oxford, England, the oldest university bookshop in the city.

Truslove & Hanson was a minor independent publishing firm that ran a number of fashionable bookshops in the West End of London. They also printed personalized stationery and bookplates, offered a bookbinding service, and acted as London agents for the State Library of New South Wales. There was a New York branch, Truslove, Hanson & Comba, from 1899 to 1903.