Thornton's Corners GO Station is a planned GO Transit train station to be built by Metrolinx in the community of Oshawa, Ontario, as part of the approved expansion of train service on the Lakeshore East line to Bowmanville. [4] The station would be located along a new spur line connecting the CNR rail corridor east of Oshawa GO Station to CP Rail's Belleville Subdivision further north. [5]

As of 2022 [update] , Metrolinx identifies this station by the name "Thornton Road East" rather than just "Thornton Road" on its website; the station name is still subject to change. [6]

In 2011, Metrolinx proposed building the station at the northwest corner of the intersection of Thornton Road and Stellar Drive along a new spur line would have connected the Canadian National Railway (CNR) line west of Oshawa GO Station to the Canadian Pacific Railway (CPR) freight line north of the highway. [7] By 2021, Metrolinx changed the location of the new spur to be east of Oshawa GO. Since the branch from the CNR line to the new spur line was shifted east of Oshawa GO, the station location at Thornton Road and Stellar Drive was no longer possible as the spur line would bypass that site. [5]

GO Transit is a regional public transit system serving the Greater Golden Horseshoe region of Ontario, Canada. With its hub at Union Station in Toronto, GO Transit's distinctive green and white commuter rail trains and coach-style buses serve a population of more than seven million across an area over 11,000 square kilometres (4,200 sq mi) stretching from London in the west to Peterborough in the east, and from Barrie in the north to Niagara Falls in the south. In 2021, the system had a ridership of 13,579,400]. GO Transit operates diesel-powered double-decker trains and coach buses, on routes that connect with all local and some long-distance inter-city transit services in its service area. 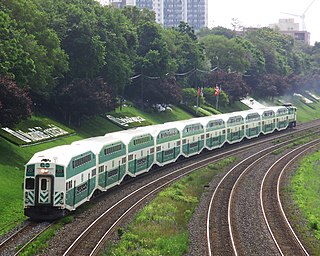 Lakeshore West is one of the seven train lines of the GO Transit system in the Greater Toronto Area, Ontario, Canada. It extends from Union Station in Toronto to Hamilton, with occasional trips extending to St. Catharines and Niagara Falls.

The Milton line is one of the seven train lines of the GO Transit system in the Greater Toronto Area, Ontario, Canada. It extends from Union Station in Toronto to Milton, by way of Mississauga. 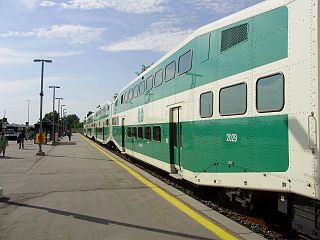 Barrie is one of the seven train lines of the GO Transit system in the Greater Toronto Area, Ontario, Canada. It extends from Union Station in Toronto in a generally northward direction to Barrie, and includes ten stations along its 101.4 kilometres (63.0 mi) route. From 1982 to 1990 and again from 1993 to 2007, it was known as the Bradford line, named after its former terminus at Bradford GO Station until the opening of Barrie South GO Station.

Richmond Hill is one of the seven train lines of the GO Transit system in the Greater Toronto Area, Ontario, Canada. It operates between Union Station in Toronto to Bloomington GO Station in the north in Richmond Hill. Trains on the line operate only during weekday peak hours, while off-peak weekday times are served by the GO bus route 61. 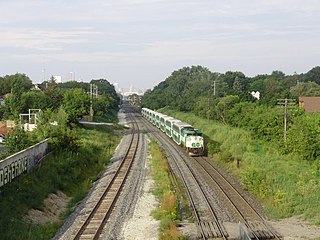 The Stouffville line is one of the seven train lines of the GO Transit system in the Greater Toronto Area, Ontario, Canada. Its southern terminus is Union Station in Toronto, and its northern terminus is Old Elm in Whitchurch-Stouffville. There are connections from almost every station to Toronto Transit Commission or York Region Transit bus services.

Lakeshore East is one of the seven commuter rail lines of GO Transit in the Greater Toronto Area, Ontario, Canada. It extends from Union Station in Toronto to Oshawa GO in Durham Region. Buses from Oshawa connect to communities further east in Newcastle, Bowmanville and Peterborough.

The Union Pearson Express is an airport rail link connecting Union Station in Downtown Toronto to Toronto Pearson International Airport. The UP Express began operation on 6 June 2015, in time for the 2015 Pan American Games. The UP Express travels between Union and Pearson in 25 minutes departing every 15 minutes, seven days a week. At the launch announcement, it was stated that the UP Express was projected to carry 2.35 million passengers annually and eliminate approximately 1.2 million car trips in the first year. 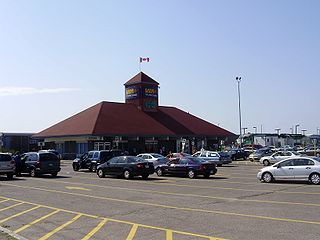 Oshawa GO station is a station for commuter rail, passenger rail and regional bus services in Oshawa, Ontario, Canada. It is the terminal station for the Lakeshore East line of GO Transit and serves Via Rail's Corridor service, which travels from Toronto to both Ottawa and Montreal. The bus terminal is served by bus routes of GO Transit and Durham Region Transit.

Metrolinx is a Crown agency of the Government of Ontario that manages and integrates road and public transport in the Greater Toronto and Hamilton Area (GTHA), which comprises much of Ontario's Golden Horseshoe region. Headquartered at Union Station in Toronto, the agency was created as the Greater Toronto Transportation Authority on June 22, 2006. The agency adopted its present name as a brand name in 2007 and eventually as the legal name in 2009.

Line 5 Eglinton, also known as the Eglinton Crosstown or the Crosstown, is a light rail line that is under construction in Toronto, Ontario, Canada. Owned by Metrolinx and operated by the Toronto Transit Commission (TTC), the line will be part of the Toronto subway system as its fifth route. The first phase of the 19-kilometre (12 mi) line will include 25 stops along Eglinton Avenue, from Mount Dennis station underground to Laird station, after which it will run predominantly at-grade within the street's median to Kennedy station, where it will connect underground with Line 2 Bloor–Danforth and Line 3 Scarborough.

Line 6 Finch West, also known as the Finch West LRT, is a light rail line under construction in Toronto, Ontario, Canada, to be operated by the Toronto Transit Commission. The 10.3-kilometre (6.4 mi), 18-stop line is to extend from Finch West station on Line 1 Yonge–University to the North Campus of Humber College in Etobicoke. Unlike most of the Toronto streetcar system, the line will be segregated from traffic. As well, it will use transit signal priority and standard gauge rather than the broad Toronto gauge. The line is forecast to carry about 14.6 million rides a year or 40,000 a day by 2031. The line will replace the 36 Finch West bus route – one of the three busiest bus routes in Toronto. The line is scheduled for completion in 2023, with an estimated cost of $1.2 billion.

GO Transit is an interregional public transit system in Southern Ontario, Canada, operated by the provincial crown agency Metrolinx. It primarily serves the conurbation referred to by Metrolinx as the "Greater Toronto and Hamilton Area" (GTHA) with operations extending to several communities in the area centred around Toronto and Hamilton.

West Harbour GO Station is a regional rail station in the North End neighbourhood of Hamilton, Ontario, Canada. The station has been served by GO Transit's Lakeshore West line since July 9, 2015. Via Rail service may eventually be provided.

Darlington GO Station is a planned GO Transit train station to be built by Metrolinx in the community of Darlington, Ontario, Canada, as part of the approved expansion of train service on the Lakeshore East line to Bowmanville. It will be situated between the main downtown areas of Oshawa and Bowmanville, in an area that is anticipated to be developed over the next few years. The station is intended to serve areas east of the station, as there will be close access to Highway 401. Approximately 1,100 parking spaces will be supplied on opening day, and future parking expansions will be possible. A bus loop and a "Kiss and Ride" area will be included. Initially, it will consist of one side platform, which will become an island platform as demand grows and a second track is built. In 2017, the station was expected to open in 2024.

Bowmanville GO Station is a planned GO Transit train station to be built by Metrolinx in the community of Bowmanville, Ontario. It will be the terminus station of GO Transit's approved expansion of train service on the Lakeshore East line, and will become a transit hub for Durham Region Transit and GO Transit. Approximately 770 parking spaces will be provided on the south side of the station. A bus loop and a "Kiss and Ride" area will be included. The station is expected to open in 2024.

Oshawa Central GO Station is a planned GO Transit train station to be built by Metrolinx in Oshawa, Ontario, Canada as part of the approved expansion of train service on the Lakeshore East line to Bowmanville. It will be built along an existing freight rail line owned by Canadian Pacific Railway, on a section of land formerly occupied by Ontario Malleable Iron Company until 1977 and later by Knob Hill Farms at 500 Howard Street in downtown Oshawa.

GO Expansion, previously known as GO Regional Express Rail, is a project to improve GO Transit train service by adding all-day, two-way service to the inner portions of the Barrie line, Kitchener line and the Stouffville line, and by increasing frequency of train service on various lines to every 15 minutes or better on five of the corridors. This would be achieved with the electrification of at least part of the Lakeshore East line, Lakeshore West line, Barrie line, Kitchener line and Stouffville line. GO Expansion is one of the Big Move rapid transit projects.

GO Transit rail services are provided throughout the Greater Toronto and Hamilton Area (GTHA) and the Greater Golden Horseshoe. The GO Transit rail fleet consists of 90 MPI MP40 locomotives and 979 Bombardier BiLevel Coaches. In 2021, the system had a ridership of 8,979,300 passengers per year.

The Ontario Line is a planned rapid transit line in Toronto, Ontario, Canada. Its northern terminus will be at Eglinton Avenue and Don Mills Road, at Science Centre station, where it will connect with Line 5 Eglinton. Its southern terminus will be at the existing Exhibition GO Station on the Lakeshore West line. The Ontario Line was announced by the Government of Ontario on April 10, 2019. The Ontario government estimated the cost at $10.9 billion for this 15.6-kilometre (9.7 mi) line and hoped to complete the project by 2027, a completion date that, by December 2020, had been revised to 2030. A groundbreaking ceremony for the project took place on March 27, 2022.