Thornton's Restaurant was opened in the Fitzwilliam Hotel on St Stephen's Green in 2002. [7] [8]

Thornton's Restaurant was embroiled in a controversy in 2007 surrounding Thornton's alleged refusal to sell chips to his restaurant customers, sparking comparisons to British chef Gordon Ramsay. A customer requested the food but, upon receiving it, he changed his mind and sent them back to the kitchen. [9] Thornton then allegedly emerged from the kitchen with the chips and slammed them down on the man's table, with the remark: “They were cooked specially for you, so you eat them, you dickhead”. He later is alleged to have called them "wankers" before removing them from his restaurant. [9]

Asked about the incident by broadcaster Joe Duffy on his RTÉ Radio 1 Liveline programme, Thornton stressed that he had not so much been infuriated by the request of chips (he supposedly provides them for younger customers on a regular basis) but that he had been aggravated by the attitude of this particular customer. [9] The incident has since seen Thornton become associated with a dislike of chips and, as recently as 2009, has been crafted as a pun by the Irish media for any other outlet which does not serve the food. [10] Thornton has also spoken out against serving food such as pizza in his restaurant. [11]

Thornton was named Food & Wine Magazine's Chef of the Year for Ireland in 2007. [7] His restaurant had two Michelin stars but it lost one of them; one newspaper at the time portrayed a cartoon of Thornton setting the Michelin Guide alight. [12] 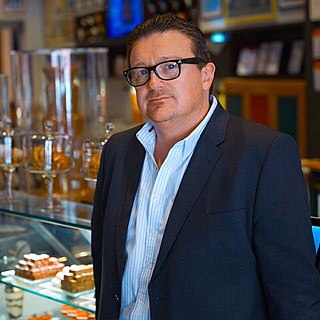 Conrad Gallagher is an Irish-born chef/restaurateur from Letterkenny, County Donegal, based in Dubai since 2016. He was the youngest chef ever awarded a Michelin star at the time, for Peacock Alley in Dublin, at the age of 26 in 1998. In a career that has attracted both accolades and controversy, Gallagher has owned restaurants in Dublin, New York, London, Las Vegas and Cape Town, and has featured in two reality television cooking series. He has been based in Dubai since 2016, where he opened restaurant consultancy Food Concepts 360 in 2018. Gallagher also owns chef recruitment agency The Chefs Connection and opened The Chefs Playground in Johannesburg, South Africa, in April 2020 as a culinary training centre and specialist shop for chefs’ apparel and equipment. In February 2021, Gallagher opened "Off the Menu Food Emporium", a delicatessen, coffee and wine shop serving tapas-style meals, in Port Elizabeth, South Africa. He also opened Bistro Vin de Boeuf, in St Francis Bay.

Heat is an Irish prime time reality television series broadcast on RTÉ One. The programme sees two professional chefs, Kevin Dundon and Kevin Thornton, attempt to train amateur participants to each compose a restaurant menu. Each chef has won one series each. Each series, of which there have so far been two, runs for six weeks. The first series began broadcasting weekly in July 2008, with Team Dundon winning. A second series followed in February 2009, airing on Tuesday nights at 20:30, with Team Thornton winning. Dundon has described the series as being akin to "a fly-on-the wall documentary inside the kitchen of a very high-end kitchen".

Guerrilla Gourmet is an Irish television series broadcast on RTÉ One. The series features professional chefs from various backgrounds, such as Dylan McGrath and Kevin Dundon, who each take on a new challenge. Each episode sees a different chef try to construct a temporary "guerrilla restaurant" out of nothing, taking on the task of locating a premises, composing a menu, cooking the food to serve to the customers and finding the actual customers themselves. The six-part series began broadcasting on 11 February 2008 at 20:30. Locations featured include Blackrock College, the Royal Hospital Kilmainham and the Rock of Cashel.

Dylan McGrath is an Irish celebrity head chef. He was the owner of the now defunct Michelin starred restaurant Mint in Dublin which closed as a result of the economic downturn. In August 2010 he opened 'Rustic Stone Restaurant by Dylan McGrath' on South Great George's Street in Dublin's city centre. In 2011 Dylan was announced by RTÉ One as the judge on the Irish version of the show Masterchef. He also appeared in the 2008 RTÉ One television series Guerrilla Gourmet and in the fly on the wall series The Pressure Cooker. Derry Clarke has called him a "brilliant young chef".

The Pressure Cooker is a once-off fly on the wall documentary broadcast on RTÉ One. It follows the successful efforts of celebrity chef Dylan McGrath to obtain a Michelin star for his business, Mint, in Ranelagh, Dublin. It was broadcast on 4 February 2008 at 21:30. McGrath was noted in the Irish media and in the general cuisine profession for his repeated shouting and swearing at his staff during the filming of this documentary.

Mint Restaurant was a Michelin star–winning restaurant located in Ranelagh, Dublin in Ireland. It was owned by the controversial celebrity chef Dylan McGrath. The restaurant was featured in the 2008 RTÉ One fly on the wall documentary The Pressure Cooker, a programme which led to much complaint from McGrath's fellow chefs in the Irish media about his alleged mistreatment of his staff. The closure of Mint Restaurant was publicised in the Evening Herald on 23 April 2009.

Derry Clarke is an Irish celebrity chef, and was the proprietor of the restaurant L'Ecrivain. He has also been a reality television judge, having acted as a judge alongside Bibi Baskin and Sammy Leslie on the RTÉ One reality television series Fáilte Towers, and has appeared on other programmes such as The Restaurant, The Afternoon Show and The Panel.

L'Ecrivain was a restaurant on Lower Baggot Street in Dublin, Ireland, which was awarded one Michelin star from 2003 to 2020. The Michelin Guide awarded the restaurant the "Red M", indicating "good food at a reasonable price", from 1996 to 1999. 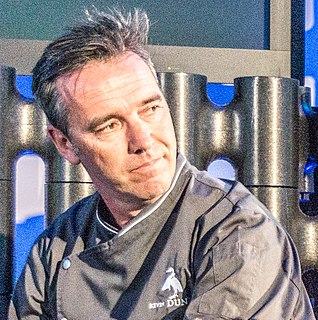 Kevin Dundon is an Irish celebrity chef, television personality and author, known for featuring on television series such as Guerrilla Gourmet and Heat. He is the author of the book, Full on Irish: Contemporary Creative Cooking and his recipes have been featured in publications such as the Sunday Tribune and Weekend magazine in the Irish Independent. He has also cooked for The Queen and both an Irish and a US President.

Kevin Thornton is an Irish celebrity chef, radio and television personality and author, known for featuring on television series such as Guerrilla Gourmet and Heat and characterised by a supposed dislike of chips and confirmed dislike of pizza. He has written a book, Food for Life, and had his recipes featured on the national radio station Newstalk. He has been praised by The New York Times and featured in publications such as The Dubliner and the Irish Independent.

Nick Munier is a Maitre d'Hotel and restaurant manager. He is best known in the United Kingdom as the Maitre d'Hotel of ITV's prime-time reality show Hell's Kitchen and in Ireland as co-presenter of MasterChef Ireland. He was also a former co-owner of Pichet restaurant in Dublin's Trinity Lane.

Neven Maguire is an Irish celebrity chef and television personality from Blacklion, County Cavan. He is also the head chef and proprietor of the MacNean House and Restaurant.

The House is one of the restaurants at the Cliff House Hotel in Ardmore, County Waterford, Ireland. It is a fine dining restaurant that was awarded a Michelin star for each year in the period 2010 to present. Bridgestone Guides also lists the hotel as one of the 100 Best Places To Eat. Journalist Pol O Conghaile listed the hotel and restaurant on his The travel hot list 2010 in the Irish Independent.

Peacock Alley was a restaurant housed in the Fitzwilliam Hotel at St. Stephen’s Green, Dublin, County Dublin, Ireland from 1999 to 2002. Before that, its location was on Baggot Street in South William Street.

Oliver Dunne is an Irish head chef and restaurant owner. He is the owner of the Michelin starred restaurant Bon Appétit in Malahide, County Dublin. Dunne was a regular guest in the former Irish TV-show The Afternoon Show.

Ross Lewis is an Irish Michelin-star-winning head chef and co-owner of the restaurant Chapter One.

Myrtle Allen was an Irish Michelin star-winning head chef and co-owner of the restaurant The Yeats Room at Ballymaloe House in Shanagarry, County Cork. Besides her career in cooking, she had also been a writer, hotelier and teacher.

Paolo Luigi Mario Tullio was a writer and a Michelin star-winning head chef of the former restaurant Armstrong's Barn in Annamoe, County Wicklow.