Thornton Creek is 18 miles (29 km) of urban creeks and tributaries from southeast Shoreline through northeast Seattle to Lake Washington. Its 12-square-mile (31 km2) watershed, the largest in Seattle, exhibits relatively dense biodiversity for an urban setting; [4] it is home to frogs, newts, ducks, other birds, and an occasional beaver, in addition to more than 200,000 people. [5] From west of Jackson Park Golf Course in Shoreline, [6] from Sunny Walter-Pillings Pond [7] in Licton Springs–North College Park, [8] and north Northgate [9] Thornton Creek flows through Maple Leaf and Lake City, including the Victory Heights, Meadowbrook, and Matthews Beach neighborhoods, and empties into the lake at Matthews Beach Park.

Thornton Creek flows through Meadowbrook Pond, [10] visited by migratory birds and an occasional transient beaver or coyote. Before European settlement, Native Americans lived around Lake Washington. One of the 18 historic home sites was identified near the mouth of Thornton Creek. [11] Early in the 1900s, the creek was a spawning ground for at least five species of Pacific salmon and trout, as well a habitat for insects, amphibians, muskrats, bats, coyotes, and birds. [4] The areas surrounding the creek were developed without regard for that habitat and the riparian corridor; species' diversity declined, and the creek became a typical degraded urban watershed. [12] Storm water retention, sites restoration, an Environmental Learning Center next to a school, and a fish ladder contributed to restoration and the return of native plants and wildlife. [13]

For many decades, much of the stream has run through culverts, notably under the parking lot of Northgate Mall. Building on gradual successes in restoration, [7] [14] activist neighbors began [6] [15] working with the City of Seattle and developers toward daylighting parts of the buried creek. [16]

In 2004, the City of Seattle purchased the 2.4-acre (0.97 ha) parking lot from Northgate Mall and began building the Thornton Creek Water Quality Channel. Opened in 2009, it achieved several community goals in limited space: integrating a water-quality facility, providing a diverse housing mix, and allowing public open space. It receives and treats runoff from 680 acres (280 ha) by providing a multilayered landscape of native plants that also serves as an amenity for surrounding private development. [17]

Organizations of citizens have cleaned up nearby wetlands, educated the public about stream health and quality of neighborhood life, and rallied to bring more of the creek to daylight. Many restoration projects in Seattle have been in some way connected to or inspired by Thornton Creek. [5]

Neighborhoods of the Thornton Creek watershed

The Union Bay Natural Area (UBNA) in Seattle, Washington, also known as Union Bay Marsh, is the restored remainder of the filled former Union Bay and Union Bay Marsh. It is located at the east end of the main campus, south of NE 45th Street and west of Laurelhurst. Ravenna Creek is connected to University Slough, thence to Union Bay, and Lake Washington. Drainage Canal is one of three or four areas of open water connected with Lake Washington around Union Bay Marsh. The canal extends from NE 45th Street, between the driving range and IMA Sports Field 1, south to the bay, ending southeast of the Husky Ballpark baseball grandstand. The Drainage Canal that carries Ravenna Creek past UBNA to Union Bay is locally sometimes called University Slough.

Ravenna Creek is a stream in the Ravenna and Roosevelt neighborhoods of Seattle, Washington, whose present daylighted length of nearly 3,500 feet (1.1 km) is entirely within the Ravenna & Cowen Parks.

Longfellow Creek is a stream in the Delridge district of West Seattle, in Seattle, Washington. It runs about 3.38 miles (5.4 km) from Roxhill Park north to the Duwamish West Waterway at Elliott Bay. The Duwamish called the creek "Smelt", denoting smelt fish. The creek was a traditional fishery dating back to the 14th century.

Northgate is a neighborhood in north Seattle, Washington, named for and surrounding Northgate Mall, the first covered mall in the United States. Its east-west principal arterials are NE Northgate Way and 130th Street, and its north-south principal arterials are Roosevelt Way NE and Aurora Avenue N. Minor arterials are College Way-Meridian Avenue N, 1st, 5th, and 15th avenues NE. Interstate 5 runs through the district. Besides the eponymous mall, the most characteristic distinctions of the area are North Seattle College (NSC), the south fork of the Thornton Creek watershed, and the Idriss Mosque.

Magnuson Park is a park in the Sand Point neighborhood of Seattle, Washington, United States. At 350 acres (140 ha) it is the second-largest park in Seattle, after Discovery Park in Magnolia. Magnuson Park is located at the site of the former Naval Station Puget Sound, on the Sand Point peninsula with Pontiac and Wolf bays that juts into Lake Washington in northeast Seattle.

Lake City is the northeast region of Seattle, centered along Lake City Way NE (SR-522), 7–8 miles (11–13 km) northeast of downtown. A broader definition of the Lake City area includes all the land between 15th Avenue NE and Lake Washington, and between NE 95th and 98th streets to the Seattle city limits at NE 145th Street. Lake City encompasses much of the Thornton Creek watershed, the focus of a long restoration campaign by citizens and Seattle Public Utilities staff to enhance the residential environment of Lake City.

Ravenna Park and Cowen Park comprise a single contiguous recreation and green space in the Ravenna neighborhood of Seattle, Washington in the United States. These public parks encompass the ravine with a maximum depth of 115 feet (35 m) through which Ravenna Creek flows.

Northgate Mall is an enclosed shopping mall in Seattle, Washington, United States. It is located in the Northgate neighborhood on Interstate 5, adjacent to Northgate Way and the Northgate Transit Center, a future light rail station. The mall is anchored by Bed Bath & Beyond, DSW, and Nordstrom Rack. 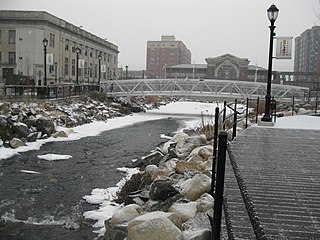 Daylighting can be defined as "“opening up buried watercourses and restoring them to more natural conditions". An alternative definition refers to "“the practice of removing streams from buried conditions and exposing them to the Earth's surface in order to directly or indirectly enhance the ecological, economic and/or socio-cultural well-being of a region and its inhabitants”. The term is used to refer to the restoration of an originally open-air watercourse, which had at some point been diverted below ground, back into an above-ground channel. Typically, the rationale behind returning the riparian environment of a stream, wash, or river to a more natural state is to reduce runoff, create habitat for species in need of it, or improve an area's aesthetics. In the UK, the practice is also known as deculverting.

Olympic Hills is a neighborhood in the Lake City district of Seattle, Washington.

In the history of Seattle before white settlement, thirteen prominent villages existed in what is now the city of Seattle. The people living near Elliott Bay, and along the Duwamish, Black and Cedar Rivers were collectively known as the doo-AHBSH, or People of the Doo ("Inside"). Four prominent villages existed near what is now Elliott Bay and the (then-estuarial) lower Duwamish River. Before civil engineers rechanneled the Duwamish, the area had extensive tidelands, and had an abundance of seafoods.

Pinehurst is a neighborhood in the Northgate area of Seattle, Washington, United States. It is bounded by NE 145th Street to the north, NE Northgate Way to the south, I-5 to the west, and Lake City Way to the east. These boundaries were determined by the Pinehurst Community Council. Pinehurst's northern boundary of NE 145th Street makes Pinehurst one of the northernmost neighborhoods in the city of Seattle. 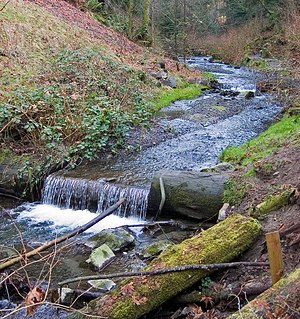 Boeing Creek is a stream in the U.S. state of Washington, located in the city of Shoreline, just north of Seattle. It is about 1.6 miles (2.6 km) long and empties into Puget Sound. The creek is heavily modified along its course, and in many places has been diverted into culverts. The watershed of Boeing Creek is about 11.2 square miles (29 km2) in size, with two main tributaries aside from the mainstem. The creek takes its name from William Boeing, who built a mansion along the creek in 1913. Despite the river modifications and stormwater pollution, the creek supports a variety of riparian habitats, native animals and fishes.

Matthews Beach Park is a 22-acre (0.9 km²) park in the Matthews Beach neighborhood of Seattle, Washington. It is a popular swimming beach in the summer, although it is also open during winter months.