Thornton House is a historic house in Stone Mountain, Georgia.

Thomas Redman Thornton (1769–1826) constructed the house around 1790 at Union Point, Georgia. The house was moved in the late 1960s by the Atlanta Art Association to a location behind the High Museum of Art in Midtown Atlanta. Then the house was moved again in 1968 for final reconstruction in Stone Mountain Park. [1]

Union Point is a city in Greene County, Georgia, United States. As of the 2010 census the city population was 1,617.

The High Museum of Art, located in Atlanta, is a leading art museum in the Southeastern United States. Located on Peachtree Street in Midtown, the city's arts district, the High is a division of the Woodruff Arts Center.

Midtown Atlanta, or Midtown, is a high-density commercial and residential neighborhood of Atlanta, Georgia. The exact geographical extent of the area is ill-defined due to differing definitions used by the city, residents, and local business groups. However, the commercial core of the area is anchored by a series of high-rise office buildings, condominiums, hotels, and high-end retail along Peachtree Street between North Avenue and 17th Street. Midtown, situated between Downtown to the south and Buckhead to the north, is the second-largest business district in Metro Atlanta. In 2011, Midtown had a resident population of 41,681 and a business population of 81,418. 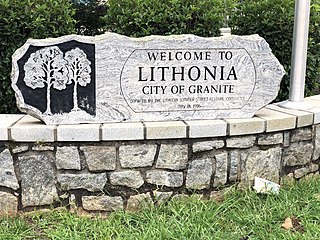 Lithonia is a city in eastern DeKalb County, Georgia, United States. The city's population was 1,924 at the 2010 census. Lithonia is in the Atlanta metropolitan area. 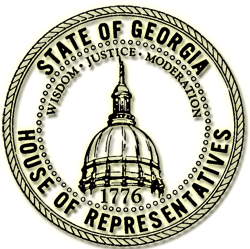 The Varsity is a restaurant chain, iconic in the modern culture of Atlanta, Georgia. The main branch of the chain is the largest drive-in fast food restaurant in the world. There are now six other branches across metropolitan Atlanta, including one near the University of Georgia in Athens.

The Art Institute of Atlanta is a nonprofit institution owned and operated by Dream Center Education Holdings (DCEH), LLC.

Slabtown or Slab Town was a red-light district established in Atlanta in the 1840s, and located off Decatur Street.

Poncey–Highland is an intown neighborhood on the east side of Atlanta, Georgia, located south of Virginia–Highland. It is so named because it is near the intersection of east/west Ponce de Leon Avenue and north/southwest North Highland Avenue. This Atlanta neighborhood was established between 1905 and 1930, and is bordered by Druid Hills and Candler Park across Moreland Avenue to the east, the Old Fourth Ward across the BeltLine Eastside Trail to the west, Inman Park across the eastern branch of Freedom Parkway to the south, and Virginia Highland to the north across Ponce de Leon Avenue. The Little Five Points area sits on the border of Poncey–Highland, Inman Park, and Candler Park. 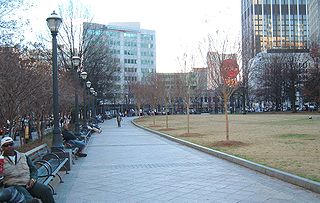 Miss Freedom, originally christened as Goddess of Liberty, is the name of the statue adorning the dome of the Georgia State Capitol since 1889. Commissioned in 1888, the hollow copper statue is painted white, weighs over 1600 lbs and is over 26 feet tall. She was sculpted with a torch in her right hand and a sword in her left. The torch is a functioning Mercury vapor lamp, casting a blue-green light at night. The torch in her right hand was supposed to be a working light continuously, but it remained dark until it was reconstructed in 1959. Tube and trolley systems have been installed so the bulb can be changed from the inside.

The Stone Mountain Tennis Center was a tennis venue at Stone Mountain Park in Stone Mountain, Georgia, USA. It was built to host the tennis events for the 1996 Summer Olympics and the 1996 Summer Paralympics, at a total cost of $22 million. At the time of the Olympics, the complex included over 12,000 seats for tennis fans, a 50,000-square-foot (4,600 m2) plaza area located around the stadium, and a stadium court plus 15 additional outer courts. The reconfigured stadium held 7,200 people, and two smaller courts seated 4,000 and 2,000.

Netherworld Haunted House is a self-guided, walk-through haunted attraction located near Atlanta, Georgia. It is a seasonal Halloween-based event which opened in 1997.

Copenhill, Copenhill Park, or Copen Hill was a neighborhood of Atlanta, Georgia which was located largely where the Carter Center now sits, and which now forms part of the Poncey-Highland neighborhood.

The Castle, also known as Fort Peace, is the former residence of wealthy agricultural supplier Ferdinand McMillan (1844–1920). It is located at 87 15th Street NW in Midtown Atlanta, Georgia next to the High Museum of Art. After McMillan's death, the building long housed facilities for Atlanta's arts community. The City designated The Castle a landmark in 1989.

The Hammonds House Museum is a museum for African American fine art, located at 503 Peeples Street SW in the West End neighborhood of Atlanta, Georgia. It is located in the 1872 Victorian house, former residence of Dr. Otis Thrash Hammonds, a prominent Atlanta physician and patron of the arts.

The Bridge is a 1997 sculpture by Thornton Dial. It is located at John Lewis Plaza in Freedom Park in Atlanta, Georgia at the intersection of Ponce de Leon Avenue with Freedom Parkway in the Poncey-Highland neighborhood. The work portrays "congressman John Lewis' lifelong quest for civil and human rights" and the community's "valiant efforts to stop the road and preserve intown neighborhoods".

The Hotel Aragon was a six-story, 125-room hotel located 169 Peachtree Street NE, at the southeast corner of Ellis Street in Atlanta, in what is today the Peachtree Center area of downtown. It was a major addition to the city's hotel capacity at its completion in 1892, cost $250,000, and was built and owned by George Washington Collier. It was remarkable at the time as the only major hotel in the city not located adjacent to Union Station. A 1902 guidebook describes the Aragon as one of three chief first-class hotels in the city, together with the Kimball House and the Majestic Hotel.

Homage to King is a sculpture by Xavier Medina Campeny. It is located at the southwest corner of Freedom Parkway and Boulevard in Atlanta, Georgia in the Old Fourth Ward neighborhood.The work portrays Martin Luther King, Jr. outstretching his arms, representing a welcome to those visiting the Martin Luther King, Jr., National Historic Site. The location is also one of an oft-used view of the Downtown Atlanta skyline.