Thornton Peak is a prominent mountain that rises above the Daintree Rainforest to a height of 1374 m. [1] The mountain is located about 80 km northwest of Cairns within the catchment of the Daintree River.

The Daintree River is a river that rises in the Daintree Rainforest near Cape Tribulation in Far North Queensland, Australia. The river is located about 100 kilometres (62 mi) northwest of Cairns in the UNESCO World Heritage–listed Wet Tropics of Queensland. The area is now primarily a tourist attraction.

Mount Bartle Frere is the highest mountain in Queensland at an elevation of 1,611 metres (5,285 ft). The mountain was named after Sir Henry Bartle Frere, a British colonial administrator and then president of the Royal Geographical Society by George Elphinstone Dalrymple in 1873. Bartle Frere was British Governor of Cape Colony at the outset of the Zulu Wars. The Aboriginal name for the mountain is Chooreechillum.

Mount Bellenden Ker is the second-highest mountain in Queensland, Australia, with a height of 1,593 metres (5,226 ft). It is named after the botanist John Bellenden Ker Gawler. Located 60 km (37 mi) south of Cairns near Babinda, it is adjacent to Mount Bartle Frere, the state's highest peak, part of the Bellenden Ker Range which is also known as the Wooroonooran Range. The two mountains dominate the Josephine Falls section of the Wooroonooran National Park. Both peaks are made of resistant granite and are remnants of an escarpment that has been eroded by the Russell and Mulgrave Rivers.

Mount Superbus lies 150 kilometres south-west of Brisbane, Australia and is South East Queensland's highest peak at 1,375 metres. At this elevation it is the fifth-highest peak in Queensland, after Mount Bartle Frere at 1,622 m, Mount Bellenden Ker at 1,593 m, Mount Fisher at 1,385 m and Mount Carbine Tableland at 1,383 m, all in Far North Queensland.

The indigenous Eastern Kuku Yalanji people's name for Thornton Peak is Wundu, and it has spiritual significance for them.

The peak is covered by rainforest and is home to a number of endemic species. Thornton Peak is one of only three mountain tops that are home to the cinereus ringtail possum. [2] 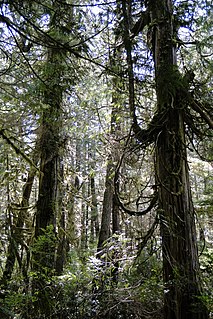 Rainforests are forests characterized by high rainfall, with annual rainfall in the case of tropical rainforests between 250 and 450 centimetres, and definitions varying by region for temperate rainforests. The monsoon trough, alternatively known as the intertropical convergence zone, plays a significant role in creating the climatic conditions necessary for the Earth's tropical rainforests.

A group of scientists have suggested the mountain is a viable candidate for the translocation of some species which require a colder climate due to climate change. [3]

Predictions measuring the effects of global warming on Australia assert that global warming will negatively impact the continent's environment, economy, and communities. Australia is vulnerable to the effects of global warming projected for the next 50 to 100 years because of its extensive arid and semi-arid areas, an already warm climate, high annual rainfall variability, and existing pressures on water supply. The continent's high fire risk increases this susceptibility to change in temperature and climate. Additionally, Australia's population is highly concentrated in coastal areas, and its important tourism industry depends on the health of the Great Barrier Reef and other fragile ecosystems. The impacts of climate change in Australia will be complex and to some degree uncertain, but increased foresight may enable the country to safeguard its future through planned mitigation and adaptation. Mitigation may reduce the ultimate extent of climate change and its impacts, but requires global solutions and cooperation, while adaptation can be performed at national and local levels.

Bunya Mountains is a national park in the South Burnett Region, Queensland, Australia. 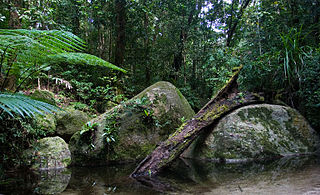 The Daintree rainforest is a national park in Far North Queensland, Australia, 1,757 km (1,092 mi) northwest of Brisbane and 100 km (62 mi) northwest of Cairns. It was founded in 1981 and is part of the Wet Tropics of Queensland. In 1988 it became a World Heritage Site. The park consists of two sections, with a settled agricultural area between them which includes the towns of Mossman and Daintree Village. 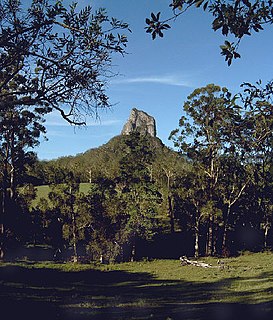 Glass House Mountains National Park is a heritage-listed national park at Glass House Mountains, Sunshine Coast Region, Queensland, Australia. It is also known as Beerburrum Forest Reserve 1. It is 70 km (43 mi) north of Brisbane and consists of a flat plain punctuated by rhyolite and trachyte volcanic plugs, the cores of extinct volcanoes that formed 27 million to 26 million years ago. The mountains would once have had pyroclastic exteriors, but these have eroded away.

The Lamington National Park is a national park, lying on the Lamington Plateau of the McPherson Range on the Queensland/New South Wales border in Australia. From Southport on the Gold Coast the park is 85 kilometres (53 mi) to the southwest and Brisbane is 110 kilometres (68 mi) north. The 20,600 hectares Lamington National Park is known for its natural environment, rainforests, birdlife, ancient trees, waterfalls, walking tracks and mountain views. 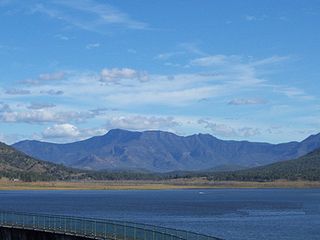 The Main Range is a mountain range and national park in Queensland, Australia, located predominantly in Tregony, Southern Downs Region, 85 kilometres (53 mi) southwest of Brisbane. It is part of the World Heritage Site Gondwana Rainforests of Australia. It protects the western part of a semicircle of mountains in South East Queensland known as the Scenic Rim. This includes the largest area of rainforest in South East Queensland. The park is part of the Scenic Rim Important Bird Area, identified as such by BirdLife International because of its importance in the conservation of several species of threatened birds. 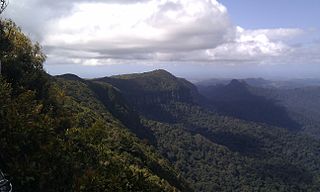 The Springbrook National Park is a protected national park that is located in the Gold Coast hinterland of Queensland, Australia. The 6,197-hectare (15,310-acre) park is situated on the McPherson Range, near Springbrook, approximately 100 kilometres (62 mi) south of Brisbane. The park is part of the Shield Volcano Group of the UNESCO World Heritage–listed Gondwana Rainforests of Australia. 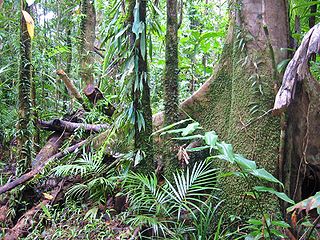 Cape Tribulation is a headland and coastal locality in the Shire of Douglas in northern Queensland, Australia.. In the 2016 census, Cape Tribulation had a population of 118 people.

The Bunya Mountains are a distinctive set of peaks forming an isolated section of the Great Dividing Range in southern Queensland. The mountain range forms the northern edge of the Darling Downs in the locality also called Bunya Mountains near Bell and Dalby. The mountains are south of Kingaroy and just to the south west of Nanango. The range is the remains of a shield volcano which was built from numerous basalt lava flows about 23-24 million years ago.

Mount Kaputar, a mountain with an elevation of 1,489 metres (4,885 ft) above sea level, is located near Narrabri in northern New South Wales. It is part of the Nandewar Range and has been preserved within the Mount Kaputar National Park. The mountain is a prominent landmark for travellers on the Newell Highway as it rises abruptly from the plains. In the cold of winter the mountain may receive a light dusting of snow.

The lemur-like ringtail possum, also known as the lemuroid ringtail possum or the brushy-tailed ringtail, is one of the most singular members of the ringtail possum group. It was once thought that they were gliding possums ; Hemibelideus literally translates as "half-glider". They are similar to lemurs in their facial characteristics, which short snouts, large, forward-facing eyes and small ears, but similar to gliders, H. in their musculo-skeletal adaptations to accommodate a leaping lifestyle. Their long, prehensile tail is a further adaptation to their arboreal habitat. 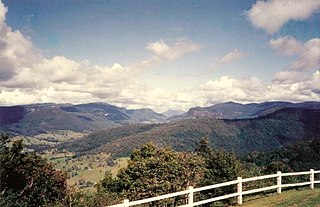 Springbrook is a mountain and plateau in the Gold Coast hinterland of South East Queensland, Australia. It is also the name of the associated town and locality within the City of Gold Coast. The highest point, known as Mt Mumjin or Springbrook Mountain is 1,020 metres (3,350 ft) high at Best of All Lookout carpark according to the latest LIDAR survey by Gold Coast City. The plateau is covered in subtropical rainforest and crossed by many small creeks. The area has excellent views to the Gold Coast and is known for its cliffs, waterfalls and forest walks, most of which are protected in the Springbrook National Park. 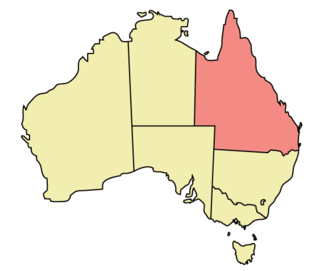 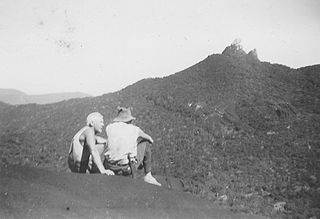 Mount Pieter Botte, also known as Ngalba-bulal, Alpaboolal, or Barbar is a mountain in the tableland region behind Cape Tribulation in Far North Queensland, Australia. It was named in 1848 by Captain Owen Stanley of the survey ship HMS Rattlesnake. The name was chosen by those on board the Rattlesnake. because of its resemblance to Peter Botte Mountain, a famous peak on the island of Mauritius. The mountain is part of the Wet Tropics of Queensland World Heritage Site.