Born February 8, 1921, in Sikeston, Missouri, Wilson earned his B.S. degree in Aeronautical Engineering from Iowa State University in Ames and a M.S. degree from the California Institute of Technology in Pasadena. [3] He also attended the MIT Sloan School of Management's Sloan Fellows program, but did not graduate. [4] While attending Iowa State, Wilson was a member of the swim team.

Wilson was awarded the NAS Award in Aeronautical Engineering in 1985 from the National Academy of Sciences. [5] In 1992, he was the recipient of the Tony Jannus Award for his distinguished contributions to commercial aviation.

Following his graduation from Iowa State, Wilson joined Boeing in 1943 and worked on bomber programs, notably the swept-wing B-47 Stratojet and B-52 Stratofortress, and also led the proposal team that won the contract for the Minuteman missile. [2] He became company president in 1968, chief executive officer in 1969, and chairman in 1972. [1] Wilson stepped down as CEO in 1986 at age 65, succeeded by Frank Shrontz, [3] and retired as chairman at the end of 1987. [6] He died at age 78 at his winter home in Palm Springs, California. [1]

The MIT Sloan School of Management is the business school of the Massachusetts Institute of Technology, a private university in Cambridge, Massachusetts. MIT Sloan offers bachelor's, master's, and doctoral degree programs, as well as executive education. Its degree programs are among the most selective in the world. MIT Sloan emphasizes innovation in practice and research. Many influential ideas in management and finance originated at the school, including the Black–Scholes model, the Solow–Swan model, the random walk hypothesis, the binomial options pricing model, and the field of system dynamics. The faculty has included numerous Nobel laureates in economics and John Bates Clark Medal winners. 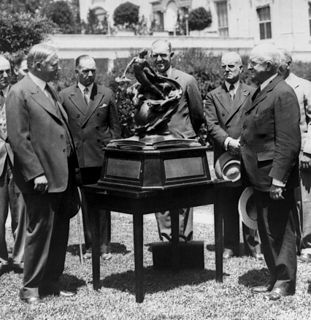 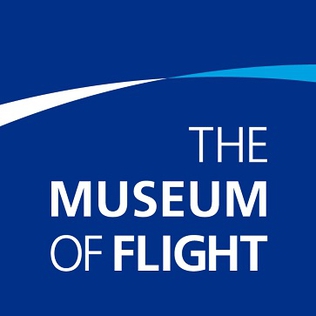 The Museum of Flight is a private non-profit air and space museum in the Seattle metropolitan area. It is located at the southern end of King County International Airport in the city of Tukwila, immediately south of Seattle. It was established in 1965 and is fully accredited by the American Alliance of Museums. As the largest private air and space museum in the world, it also hosts large K–12 educational programs.

Colonel Gerald Paul Carr was an American mechanical and aeronautical engineer, United States Marine Corps officer, naval aviator, and NASA astronaut. He was Commander of Skylab 4, the third and final crewed visit to the Skylab Orbital Workshop, from November 16, 1973, to February 8, 1974.

The Royal Aeronautical Society, also known as the RAeS, is a British multi-disciplinary professional institution dedicated to the global aerospace community. Founded in 1866, it is the oldest aeronautical society in the world. Members, Fellows, and Companions of the society can use the post-nominal letters MRAeS, FRAeS, or CRAeS, respectively. 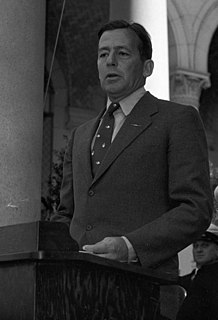 Norman (Norm) Ralph Augustine is a U.S. aerospace businessman who served as United States Under Secretary of the Army from 1975 to 1977. Augustine served as chairman and CEO of the Lockheed Martin Corporation. He was chairman of the Review of United States Human Space Flight Plans Committee.

Philip Murray Condit is an American engineer and businessman who was Chair and Chief executive officer (CEO) of the Boeing company from 1996 to 2003. He dramatically reshaped the company by Merger with McDonnell Douglas and relocating Boeing headquarters from Seattle to Chicago. He resigned to take symbolic responsibility for a military procurement scandal, although he was not accused of any ethical breaches.

The Sloan Fellows program is the world's first mid-career and senior career master's degree in general management and leadership. It was initially supported by a grant from Alfred P. Sloan, the late CEO of General Motors, to his alma mater, MIT. The program was established in 1930 at the MIT Sloan School of Management. Later it was expanded to the Stanford Graduate School of Business (1957), and London Business School (1968). Considered to be one of the most prestigious management training programs in the world, it targets experienced leaders who have demonstrated success either within organizations, or independently as entrepreneurs. Notable alumni include Kofi Annan, former United Nations Secretary-General and Nobel Peace Prize Laureate, John Browne, Baron Browne of Madingley, former chairman and CEO of BP and member of the British House of Lords, and Carly Fiorina, former CEO of Hewlett-Packard.

Jerome Clarke Hunsaker was an American naval officer and aeronautical engineer, born in Creston, Iowa, and educated at the U.S. Naval Academy and the Massachusetts Institute of Technology. His work with Gustav Eiffel outside Paris led to the first wind tunnel in the US at MIT. He was instrumental in developing a weather reporting and airway navigation. Hunsaker was also pivotal in establishing the theoretical and scientific study of aerodynamics in the United States. And he was primarily responsible for the design and construction of the Navy-Curtiss airplane (NC-4) that accomplished the first transatlantic flight, and the first successful shipboard fighter. Later he championed lighter-than-air flight but the loss of the Navy airship he designed, the USS Akron, led to the withdrawal of federal support. His WW2 chairmanship of the National Advisory Committee for Aeronautics (NACA) was notable for favouring the development of existing aircraft designs rather than experimenting with turbojets or missile technology.

The Institut Supérieur de l'Aéronautique et de l'Espace is a French grande école of engineering, founded in 1909. It was the world's first dedicated aerospace engineering school and is considered to be one of the best in Europe in the field. The school delivers a range of science and engineering degree programs. ISAE-SUPAERO is part of University of Toulouse, ISSAT, PEGASUS, GEA, Toulouse Tech, CESAER and Aerospace Valley.

Jan Roskam was the Deane E. Ackers Distinguished Professor of Aerospace Engineering at the University of Kansas. He is the author of eleven books on airplane design and flight dynamics and over 160 papers on the topics of aircraft aerodynamics, performance, design and flight controls. He founded the company DARcorporation with Willem Anemaat.

The Tony Jannus Award recognizes outstanding individual achievement in scheduled commercial aviation by airline executives, inventors and manufacturers, and government leaders. The award is conferred annually by the Tony Jannus Distinguished Aviation Society and was first bestowed in 1964 in Tampa, Florida, U.S. Its namesake, aviation pioneer Tony Jannus, piloted the inaugural flight of the St. Petersburg–Tampa Airboat Line on January 1, 1914, the first scheduled commercial airline flight in the world using heavier-than-air aircraft. In addition to preserving the legacy of Tony Jannus, the non-profit Society also offers financial assistance to college students pursuing studies in aviation and conducts an annual essay contest for high school students to encourage careers in aviation. 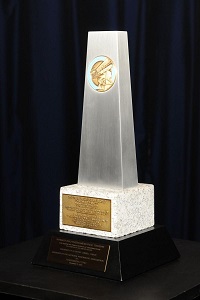 The Wright Brothers Memorial Trophy was established by the National Aeronautic Association (NAA) in 1948 after a trust fund was created in 1936 by Godfrey Lowell Cabot of Boston, a former president of the NAA. It is awarded to a living American for "significant public service of enduring value to aviation in the United States." The presentation of the award is made annually at the Aero Club of Washington, as close as possible to December 17 each year, the day on which, in 1903, the Wright brothers made the first flight in an airplane. The inaugural recipient of the trophy was William F. Durand, "a pioneer in aeronautics, naval propulsion and engineering research methods". Until 2010, winners of the award received a trophy depicting the Wright brothers' Wright Flyer aircraft. From 2010 onwards, a redesigned trophy featuring a silver obelisk and bronze inscription has been awarded.

Dennis A. Muilenburg is an American engineer, business executive, and the former president and chief executive officer (CEO) of The Boeing Company, a multinational aerospace and defense company. He was CEO from 2015 to 2019, when he was fired in the aftermath of two crashes of the 737 MAX and its subsequent groundings.