Thorntonhall (Scots : Thorntounhauch, Scottish Gaelic : Dail Bhaile Dhealgaiche) [2] is a village in South Lanarkshire, Scotland, lying around 6 miles (10 km) to the south of Glasgow, and around 2+1⁄2 miles (4 km) west of East Kilbride. The village lies just east of the boundary of East Renfrewshire, close to Waterfoot and Jackton.

Thorntonhall has a history reflecting the social changes of the last 400 years and in particular the last 120 years. It was originally just a farm that had added to it some major buildings. The then 'hall' was bought and greatly improved by a grocer called Cooper who had shops throughout the west of Scotland. Another grand house was built at Ravenscroft, again on a small hilltop. These two and the railway station were probably the catalyst for a great plan to build a mini-Edinburgh-style suburb of crescents and avenues. Only three houses were completed before the outbreak of World War I halted further development.[ citation needed ]

Before and during World War II Thorntonhall was one of the sites selected for relocation of government departments to avoid bombing raids.[ citation needed ] After the war it became part of the East Kilbride New town and this led to the construction of a large number of individual houses in this free standing village. That relative isolation led to an Upper Class housing development on a small scale throughout the period 1970 to 2000.

The population of Thorntonhall is estimated, as of 2016, at 590. [1] The majority of Thortonhall's residents own their own property, and annual incomes are well above average. [ citation needed ]

Thorntonhall has a country club which is located in the centre of the village. The clubhouse itself has catering facilities, a dining room and a members' lounge.[ citation needed ]

The A727 bypasses the village.

The village is served by Thorntonhall railway station, which has hourly services to East Kilbride and Glasgow Central. 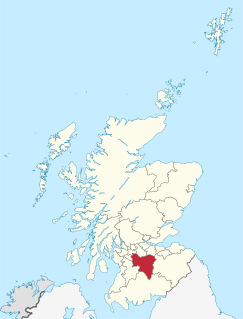 South Lanarkshire is one of 32 unitary authorities of Scotland. It borders the south-east of the City of Glasgow and contains some of Greater Glasgow's suburbs,also containing many towns and villages. It also shares borders with Dumfries and Galloway, East Ayrshire, East Renfrewshire, North Lanarkshire, the Scottish Borders and West Lothian. It includes part of the historic county of Lanarkshire.

Lanarkshire, also called the County of Lanark, is an historic county, lieutenancy area and registration county in the central Lowlands of Scotland. 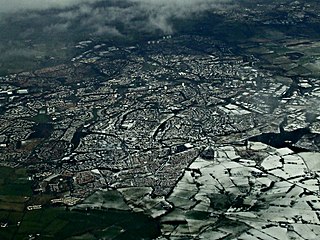 East Kilbride is the largest town in South Lanarkshire in Scotland and the country's 6th-largest city or town by population. It was also designated Scotland's first new town on 6 May 1947. The area lies on a raised plateau to the south of the Cathkin Braes, about 8 miles (13 km) south-east of Glasgow and close to the boundary with East Renfrewshire. East Kilbride is twinned with the town of Ballerup, in Denmark.

Strathaven is a historic market town in South Lanarkshire, Scotland and is the largest settlement in Avondale. The town was granted a Royal Charter in 1450, making the Town of Strathaven a burgh of barony. The current estimated population is 7,500.

Rutherglen and Hamilton West is a burgh constituency of the House of Commons of the Parliament of the United Kingdom, which was created for the 2005 general election. It covers almost all of the former constituency of Glasgow Rutherglen and most of the former constituency of Hamilton South, and it elects one Member of Parliament (MP) by the first-past-the-post system of election. The current MP is Margaret Ferrier, an independent, who won the seat at the 2019 snap general election. She had previously held the seat from 2015 to 2017. Ferrier was previously a Scottish National Party MP until the whip was withdrawn on 1 October 2020 after an incident relating to a breach of the COVID-19 pandemic regulations.

East Kilbride, Strathaven and Lesmahagow is a county constituency of the House of Commons of the Parliament of the United Kingdom, which was first used in the general election of 2005. It replaced East Kilbride and some of Clydesdale, and it elects one Member of Parliament (MP) by the first past the post system of election.

West Kilbride is a village in North Ayrshire, Scotland, on the west coast by the Firth of Clyde, looking across the Firth of Clyde to Goat Fell and the Isle of Arran. West Kilbride and adjoining districts of Seamill and Portencross are generally considered to be a small town, having a combined population of 4,393 at the 2001 census. 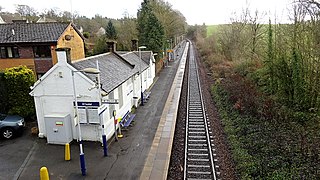 East Kilbride railway station serves the town of East Kilbride, South Lanarkshire, Scotland. The station is managed by Abellio ScotRail and it is a terminus on the former Busby Railway. The station is 11+1⁄2 miles (18.5 km) southeast of Glasgow Central.

Busby is a village in East Renfrewshire, Scotland. Busby is in the same urban area as Glasgow, although it is administratively separate. It lies on the White Cart Water 6 miles (9.7 km) south of Glasgow City Centre and 0.8 miles (1.3 km) northwest of the outskirts of East Kilbride. It directly adjoins the town of Clarkston, with which the village is closely associated. 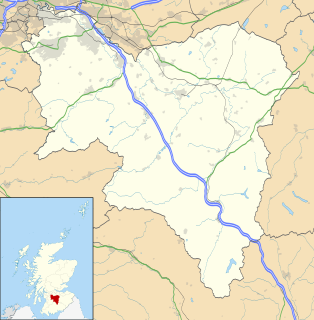 Nerston is a village situated on the northern green-belt boundary of the new town of East Kilbride in South Lanarkshire, Scotland. 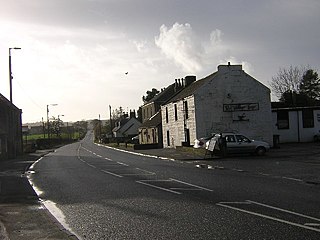 Jackton is a small village lying just beyond the western periphery of East Kilbride in South Lanarkshire, on the B764 road connecting it to the village of Eaglesham. It is also adjacent to Thorntonhall, and the two villages share a newsletter, the Peel News, derived from the name of the road connecting the two. The settlement has recently been encroached upon by new build housing on the outskirts of East Kilbride. It lies approximately 150 metres (490 ft) above sea level.

The A727 road links East Kilbride and the M77 motorway northbound. It runs from junction 3 of the M77 in Darnley to the roundabout on the western edge of East Kilbride connecting the A726, otherwise known as the 'Queensway', and Stewartfield Way and Redwood Drive. 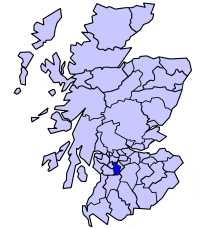 East Kilbride was a local government district in the Strathclyde region of Scotland from 1975 to 1996, lying to the south of the regional capital Glasgow. 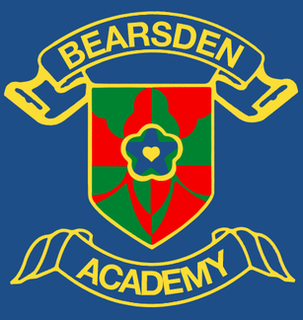 Bearsden Academy is a non-denominational, state secondary school in Bearsden, East Dunbartonshire, Scotland. The school is rated as one of the best state schools in the country.

Calderwood is a neighbourhood of the Scottish new town of East Kilbride, in South Lanarkshire. It lies on its north-east edge and is one of the largest areas of the town.

The Busby Railway is a short railway line built on the south side of Glasgow, connecting the small villages of Thornliebank, Giffnock, Clarkston and Busby and later Thorntonhall and East Kilbride with the city. It opened in two stages, in 1866 and 1868, and served industry and encouraged residential development.

East Kilbride West is one of the twenty wards used to elect members of the South Lanarkshire Council. Created in 2007, it elects three councillors. Its territory covers the parts of East Kilbride on the north-west and western peripheries of the town, including the neighbourhoods of Gardenhall, Hairmyres, Mossneuk, Nerston, Newlandsmuir, Philipshill and Stewartfield, plus the College Milton industrial area and the outlying village of Thorntonhall – these boundaries were unaffected by a 2017 national review. In 2019, the ward's population was 13,695.