The thorntooth grenadier or javelin fish, Lepidorhynchus denticulatus, is a rattail, the only member of the genus Lepidorhynchus, found around southern Australia and New Zealand, at depths of between 200 and 1,000 m. Its length is between 20 and 55 cm. 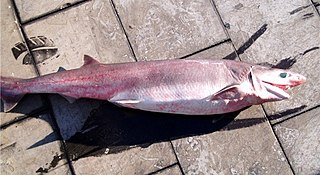 The sharpnose sevengill shark, also known as one-finned shark, perlon shark, sevengill cow shark, sharpsnouted sevengill or slender sevengill, is a species of shark in the family Hexanchidae, and the only living species in the genus Heptranchias. Found almost circumglobally in deep water, it is one of the few species of sharks with seven pairs of gill slits as opposed to the usual five. The other shark species with seven gill slits is the broadnose sevengill shark. Though small, this shark is an active, voracious predator of invertebrates and fish. When caught, this species is notably aggressive and will attempt to bite. It is of minor commercial importance.

The yellow-and-black triplefin, Forsterygion flavonigrum, a triplefin of the genus Forsterygion, is found around the north of the North Island of New Zealand at depths of between 15 and 30 m, in reef areas of broken rock. Its length is between 4 and 7 cm.

The New Zealand black angelfish or the black scalyfin, Parma alboscapularis, is a damselfish of the family Pomacentridae, found around northeastern New Zealand to depths of a few metres, over shallow rocky reef areas. Its length is between 24 and 28 cm.

The porae or blue morwong, Nemadactylus douglasii, is a morwong of the genus Nemadactylus, found around south eastern Australia and the north eastern coast of the North Island of New Zealand at depths of about 10 to 100 metres, on sandy and rocky coasts. Its length is between 40 and 100 cm. Max weight is at least 12 kg

The New Zealand demoiselle, Chromis dispilus, is a damselfish of the genus Chromis, found between North Cape and East Cape of the North Island of New Zealand to depths of about 60 metres, off rocky coasts. Its length is between 15 and 20 cm. Males are highly territorial as they defend their nesting area from other males and other species. These aggressive fish defend their eggs laid by their female counterpart. Spawning occurs between the months of December and March. The New Zealand demoiselle's territory and nesting grounds of this fish are usually the largest in a medium population density. Like most territorial fish they tend to spawn more in higher densities of the same species compared to lower densities. Aggression levels tend to be higher amount higher densities of the same species and lower levels in smaller densities. Aggression also tends to be higher during spawning then during egg defending. Elevated plasma levels of androgen testosterone and 11-Ketotesterone are associated with the heighten levels of aggression shown by the males.

Nemadactylus macropterus, commonly known as the tarakihi or jackass morwong, is a morwong of the genus Nemadactylus, found off southern Australia, the Atlantic coast of South America, and New Zealand to depths of about 400 m, on all types of bottoms. Its length is between 30 and 60 cm.

The notchheaded marblefish, Aplodactylus etheridgii, is a marblefish of the genus Aplodactylus, found between North Cape and East Cape in the North Island of New Zealand, in depths down to 40 m. Their lengths are between 35 and 40 cm. 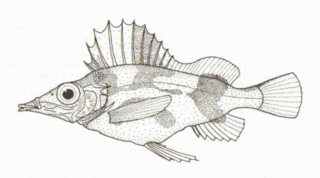 The alert pigfish, Alertichthys blacki, is a pigfish, the only species in the genus Alertichthys, found around New Zealand at depths between 100 and 600 m. It is between 15 and 20 cm in length.

The blue grenadier is a merluccid hake of the family Merlucciidae found around southern Australia and New Zealand, as well as off both the Atlantic and Pacific coasts of South America from Peru to Brazil at depths of between 10 and 1,000 m. It feeds in midwater on small squids, crustaceans, and fish. Its length is between 60 and 120 cm. It is a slender, silvery fish similar in appearance to the gemfish. The meat of the fish is white and almost always sold in fillets.

The New Zealand sole or common sole, Peltorhamphus novaezeelandiae, is a righteye flounder of the genus Peltorhamphus, found around New Zealand in shallow enclosed waters less than 100 m in depth. Their length is from 25 to 45 cm.

Arripis trutta, known as kahawai in New Zealand and as the Australian salmon in Australia, is one of four species of marine fish within the genus Arripis, found in cooler waters around the south eastern and south western coasts of Australia and the New Zealand coastline. Although it is referred to as a salmon in Australia and its species epithet trutta is the Latin for trout, it is not related to salmons or trouts of the family Salmonidae.

The longnose spurdog is a dogfish shark of the genus Squalus, found over continental shelves in all oceans, at depths of between 15 and 800 metres. They reach one metre in length.

The blue warehou or common warehou, Seriolella brama, is a medusafish of the family Centrolophidae found off southern Australia and around New Zealand, at depths of between 5m and 400m. Its length is up to about 75 cm.

The scaly gurnard, Lepidotrigla brachyoptera, is a searobin of the family Triglidae, found around New Zealand including the Kermadec Islands, at depths of between 35 and 300 m. Its length is up to 15 cm.

The spotted gurnard, Pterygotrigla picta, is a searobin of the family Triglidae, found in the Indo-Pacific oceans at depths between 200 and 500 m. Its length is up to 35 cm.

The red gurnard perch or jock stewart, Helicolenus percoides, is a rockfish of the family Sebastidae, found on the continental shelves of Australia and New Zealand at depths of between 20 and 750 m. Its length is up to 47 cm. Also called Ocean Perch, Coral Cod, Coral Perch, Reef Ocean Perch, Red Perch, Red Rock Perch, Red Gurnard Scorpionfish, and Sea Perch.

The pencil cardinalfish is a species of deepwater cardinalfish found around the world at depths of 130 to 830 m. This fish can reach up to 20 cm (7.9 in) in TL.

The New Zealand flathead, Bembrops morelandi, is a duckbill of the family Percophidae, subfamily Bembropinae, found only around New Zealand, at depths between 365 and 395 m. Their length is up to 20 cm.