The Thornwood School, located on a county road about 17 miles (27 km) west of Reserve, Montana, within the Fort Peck Indian Reservation, was built in 1932. It was listed on the National Register of Historic Places in 1993. [1]

The Thornwood School was established in the mid 1920s by Sheridan County School District No. 69. At the time, District 69 operated the Wanso School in the next township to the west; presumably a second school was required because new settlement had caused overcrowding of the Wanso School. Designated as District 69A, the Thornwood School was probably also intended for children living just across the county line, as it took on the name of the "Thornwood" ranch located nearby in Roosevelt County. The existing Thornwood School building was apparently constructed in 1932. In October of that year, School District 69 acquired from local Paul and Antinina Andrilenas. The deed recording the transfer noted that the acre was intended for the "...location and operation of a school house and yard..." Additionally, it stipulated that the land was to revert to the Andrilenas family,"... if the schoolhouse is removed there from." The schoolhouse held terms for the next 14 years except for 1941. During this time, it also served as a gathering place for community events such as socials, carnivals, and dances. Its doors were finally shut in 1946, as the region's declining population reduced the rural schools which were necessary. Eventually, School Districts 69 and 69A were consolidated with District 7 in Medicine Lake. [2]

Valhalla is a hamlet and census-designated place (CDP) within the town of Mount Pleasant, in Westchester County, New York, in the New York City metropolitan area. Its population was 3,162 at the 2010 U.S. Census. The name was inspired by a fan of the composer Richard Wagner, and the hamlet is known both as the home of the primary hospital campus of Westchester Medical Center and New York Medical College and as the burial place of numerous noted people. Valhalla is the realm of the gods in Norse mythology.

The Silver Palm Schoolhouse is an historic school in the Silver Palm Historic District within the unincorporated community of Redland, Florida, United States. It is located at Silver Palm Drive and Newton Road. On July 2, 1987, it was added to the U.S. National Register of Historic Places. 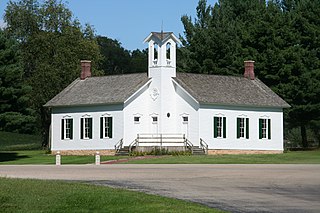 Chana School is a Registered Historic Place in Ogle County, Illinois, in the county seat of Oregon, Illinois. One of six Oregon sites listed on the Register, the school is an oddly shaped, two-room schoolhouse which has been moved from its original location. Chana School joined the Register in 2005 as an education museum.

Bruynswick School No. 8 is a former school located on Bruynswick Road in the small hamlet of the same name in the northwestern portion of Shawangunk, New York, United States. It is one of the few remainders of a time when Bruynswick was more populous.

The Old Bend High School is a historic school building in Bend, Oregon, in the United States. Opened in 1925, the building served as a public high school for 31 years and a junior high school for an additional 22 years before being transitioned in 1979 into its current role as the administrative headquarters for the Bend-La Pine School District.

The Hay Lake School is a historic schoolhouse in Scandia, Minnesota, United States, in use from 1896 to 1963. It is now operated by the Washington County Historical Society as a museum alongside the 1868 Johannes Erickson House. The school was listed on the National Register of Historic Places in 1970 for having local significance in the themes of architecture, education, and social history. It was nominated as Scandia's first and only surviving early school.

Little Red Schoolhouse, also known as Columbia School District No. 5 Schoolhouse, is located in Florham Park, Morris County, New Jersey, United States. The schoolhouse was built in 1866 and was added to the National Register of Historic Places in 1973 and then re-instated on June 6, 1986. It is open to the public the first Sunday of most months with hours of 2:00-4:00pm. Open each July 4, from 1:00-3:00pm. Entrance donations are accepted and appreciated. As a museum it includes artifacts such as broom making equipment, old maps and old school desks, and more from the 1800s and 1900s. Come ring the school bell!

The Gibraltar District School No. 2 is a historic one-room school on the Door Peninsula in the town of Gibraltar, Door County, Wisconsin, United States. Built in the 1860s to serve children in the village of Ephraim, it operated as a school for approximately eighty years before closing and being converted into a museum. It has been designated a historic site because of its place in the area's history. 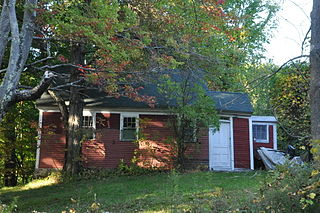 The District No. 9 Schoolhouse is a historic school building at 358 Hoyt Road in Gilford, New Hampshire. Built in 1815 and repeatedly altered to accommodated changing trends in school design, it is the best-preserved of Gilford's surviving district schoolhouses. Now a private summer residence, the building was listed on the National Register of Historic Places in 2000.

The No. 12 School is a historic one-room schoolhouse building in rural Crawford County, Arkansas. It is located on the east side of Freedom Road, a short way north of its road junction with Old 12 Cross Roads about 6 miles (9.7 km) west of Chester. It is a single-story wood vernacular frame structure with a small belfry and two entrances. Its date of construction is not documented, but it was being used as a district school in the late 19th century, a role it fulfilled until the area's district schools were consolidated in 1946. It has since served as a community meeting hall. 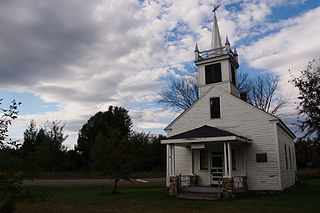 The District No. 2 School is a historic schoolhouse at Pleasant Street and Caribou Road in Passadumkeag, Maine. Built in the 1840s as a school, it later served as a church, town hall, and library. It is now a museum operated by the local historical society, and was listed on the National Register of Historic Places in 1997.

The Friends School was a historic schoolhouse in the village center of Casco, Maine. Built in 1849, it was a well-preserved example of a 19th-century one-room schoolhouse. Converted to a museum operated by the local historical society, it was listed on the National Register of Historic Places in 1996, and was destroyed by arsonists in 2018. It was located behind the town office building on Maine State Route 121.

Walnut Grove School is a historic one-room schoolhouse located southwest of Osage in rural Mitchell County, Iowa, United States. It was in operation from 1857 to 1946, and it educated anywhere from five to thirty-three student at a time. The frame structure built on a limestone foundation was constructed in 1873 on the same site as the building it replaced. A bell tower with a cast iron bell is located on the gable roof above the main entrance. Its property is on the edge of a timber along Rock Creek. In 1911 there were 88 one-room school houses in Mitchell County. This is the only one that is unaltered and in its original location. The area was settled by Norwegian pioneers in 1853. They named their small town Meroa, which has been reduced to his old schoolhouse, a Lutheran church, a cemetery, and a few houses. The building was listed on the National Register of Historic Places in 2002.

The District School No. 1 is a historic one-room schoolhouse on Lake Road in Panton, Vermont. Built about 1818, the stone building is one of Vermont's oldest district schoolhouses. It was listed on the National Register of Historic Places in 1980.

Beach School is a historic building located northwest of Mount Vernon, Iowa, United States. Because school district lines had been redrawn, students in this area were forced to attend classes in a building some distance away. Given the condition of rural roads in the late 19th century, that created a hardship for many families. From 1889 to 1891 the school district set aside funds for a new building, and Benjamin Beach donated land on his farm for the new school. Not only was his farmhouse nearby, but Beach also operated a sawmill along the creek east of the school and a gristmill across the road. The one-room schoolhouse was completed in 1892, and a bell was purchased for the building around 1901. Early drawings of the building show a small bell tower. The building was used for educational and social use until 1946, and it has subsequently been converted into a rental home. It was listed on the National Register of Historic Places in 1982. 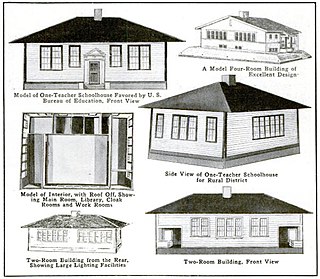 A two-room schoolhouse is a larger version of the one-room schoolhouse, with many of the same characteristics, providing the facility for primary and secondary education in a small community or rural area. While providing the same function as a contemporary primary school or secondary school building, a small multi-room school house is more similar to a one-room schoolhouse, both being architecturally very simple structures. While once very common in rural areas of many countries, one and two-room schools have largely been replaced although some are still operating. Having a second classroom allowed for two teachers to operate at the school, serving a larger number of schoolchildren and/or more grade levels. Architecturally, they could be slightly more complex, but were still usually very simple. In some areas, a two-room school indicated the village or town was wealthier and more prosperous.

The District No. 98 Schoolhouse, also known as the Stockton School, is a historic school located at 19 South Main Street in Stockton, Hunterdon County, New Jersey. It was added to the National Register of Historic Places on January 12, 2005.