The Thornycroft M or Mastiff class were a class of six British destroyers completed for the Royal Navy during 1914–16 for World War I service. They were quite different from the Admiralty-designed ships of the Admiralty Mclass, although based on a basic sketch layout provided by the British Admiralty from which J I Thornycroft developed their own design. Like the 'standard' Admiralty M class they had three funnels, but the centre funnel was thicker in the Thornycroft ships. The midships 4-inch (100 mm) gun was shipped between the second and third funnels. Patriot was fitted to carry a kite balloon.

Note Thornycroft also built six other M-class destroyers for the Royal Navy – Michael, Milbrook, Minion and Munster, all ordered on 20 September 1914, and Nepean and Nereus, both ordered on 20 November 1914; however these were to the Admiralty 'M' design and are included with the article on that large group of destroyers. 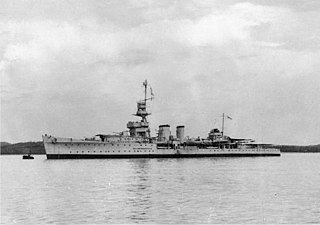 The C class was a group of twenty-eight light cruisers of the Royal Navy, and were built in a sequence of seven groups known as the Caroline class, the Calliope class, the Cambrian class, the Centaur class, the Caledon class, the Ceres class and the Carlisle class. They were built for the rough conditions of the North Sea, and proved to be rugged and capable vessels, despite being somewhat small and cramped. 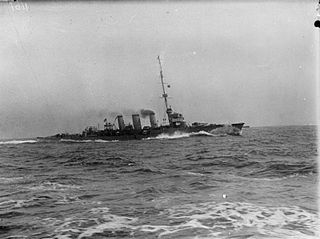 The Arethusa-class cruisers were a class of eight oil-fired light cruisers of the Royal Navy all ordered in September 1912, primarily for service in the North Sea. They had three funnels with the middle one somewhat larger in diameter than the others. All served in the First World War. They were found to be very cramped internally. 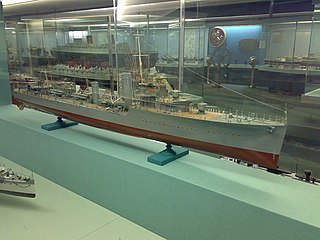 The V and W class was an amalgam of six similar classes of destroyer built for the Royal Navy under the 9th, 10th, 13th and 14th of fourteen War Emergency Programmes during the First World War and generally treated as one class. For their time they were among the most powerful and advanced ships of their type in the world, and set the trend for future British designs. 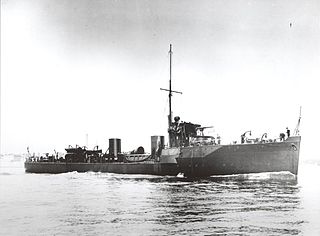 The River-class destroyer was a class of torpedo boat destroyer built for the Royal Navy at the turn of the 20th century, and which saw extensive service in World War I. The class introduced new features to destroyer design, placing a greater emphasis on seakeeping and endurance and less on a high maximum speed in good weather. All the ships were named after British and Irish rivers, and as such were the first Royal Navy destroyer class to be named systematically. 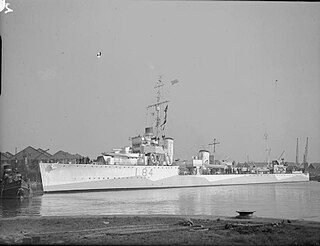 The Thornycroft type leader or Shakespeare class were a class of five destroyer leaders designed by John I. Thornycroft & Company and built by them at Woolston, Southampton for the Royal Navy towards the end of World War I. They were named after historical naval leaders. Only Shakespeare and Spenser were completed in time for wartime service. The other three were completed after the war, Broke and Keppel after being towed to Royal dockyards for completion, and two further ships - Saunders and Spragge - were cancelled. The function of a leader was to carry the flag staff of a destroyer flotilla, therefore they were enlarged to carry additional crew, offices and signalling equipment, allowing a fifth gun to be carried. These ships were very similar to the Admiralty type leader, but had Thornycroft design characteristics, the most noticeable being the broad, slab-sided funnels.

The Admiralty type leader, sometimes known as the Scott class, were a class of eight destroyer leaders designed and built for the Royal Navy towards the end of World War I. They were named after Scottish historical leaders. The function of a leader was to carry the flag staff of a destroyer flotilla, therefore they were enlarged to carry additional crew, offices and signalling equipment, allowing a fifth gun to be carried. These ships were contemporary with the Thornycroft type leader, distinguishable by their two narrow funnels of equal height, the Thornycroft designs latter having characteristic broad, slab-sided funnels. 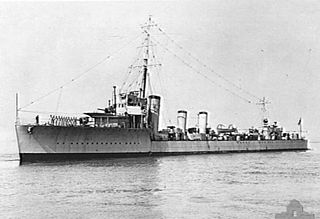 The Parker-class leaders or improved Marksman-class leaders were a class of six destroyer leaders built for the Royal Navy during 1916–17 for World War I service. They were named after famed historical naval leaders, except for Anzac, which was named to honour the Australian and New Zealand Army Corps, and was later transferred to the Royal Australian Navy. They were the last major Royal Navy warships to be ordered with three propeller shafts, a design that was never widely adopted in British warships.

The Hawthorn MClass were a class of two destroyers built for the Royal Navy under the pre-war 1913-14 Programme for World War I service. 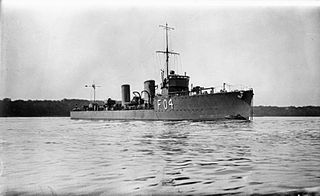 The Yarrow M class was a class of ten destroyers built for the Royal Navy that saw service during World War I. They were generally similar to the standard Admiralty M-class destroyer, but were instead designed by the builder, Yarrow & Company. Generally, they had two instead of three shafts, as well as two funnels and a straight stern, with the bridge set well back from the forecastle. The first trio were two knots faster than the Admiralty M type, despite less installed power and one less shaft; the installed power was increased for the later vessels. Jane's Fighting Ships describes the class as "very successful boats", and all ten vessels survived throughout the war to be broken up during the 1920s. Moon, Mounsey and Musketeer were each fitted to carry a kite balloon.

The M class, more properly known as the Admiralty M class, were a class of 85 destroyers built for the Royal Navy of United Kingdom that saw service during World War I. All ships were built to an identical – Admiralty – design, hence the class name. 18 other vessels which were officially included within the 'M' class were built to variant designs by three specialist builders – 10 by Yarrow, 6 by Thornycroft, and 2 by Hawthorn Leslie; these are covered in other articles.

The A class as designated in 1913 was a heterogeneous group of torpedo boat destroyers (TBDs) built for the Royal Navy in the mid-1890s. Some 42 vessels were constructed to the individual designs of their builders to meet Admiralty specifications, the only uniting feature being a specified top speed of 27 knots (50 km/h). In fact the initial six vessels were generally differentiated by a slightly lower speed and were often referred to as "26-knotters" to distinguish them from the following batch of thirty-six vessels; all fifteen surviving "27-knotter" vessels were classified by the Admiralty as the A class in 1913 to provide some system to the naming of HM destroyers. All of the "26-knotters" and most of the "27-knotters" had been lost or scrapped before the 1913 classification, but for convenience all 42 ships are listed below. The number of funnels varied from one to four. All vessels had a distinctive "turtleback" forecastle that was intended to clear water from the bow, but actually tended to dig the bow in to anything of a sea, resulting in a very wet conning position. 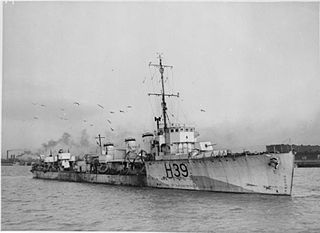 The first R class were a class of 62 destroyers built between 1916 and 1917 for the Royal Navy. They were an improvement, specifically in the area of fuel economy, of the earlier Admiralty M-class destroyers. The most important difference was that the Admiralty R class had two shafts and geared turbines, compared with the three shafts and direct turbines of the Admiralty M class, but in appearance the R class could be distinguished from its predecessors by having the after 4-inch gun mounted in a bandstand. The Admiralty ordered the first two of this class of ships in May 1915. Another seventeen were ordered in July 1915, a further eight in December 1915, and a final twenty-three in March 1916. 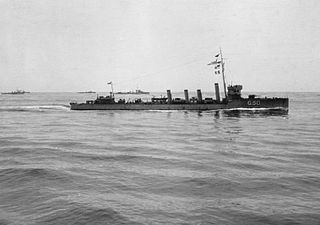 The Marksman class were a class of flotilla leaders built for the Royal Navy. Two each were ordered in the naval programmes of 1913–14 and 1914–15 with a further three being ordered under the Emergency War Programme and all saw service during World War I. 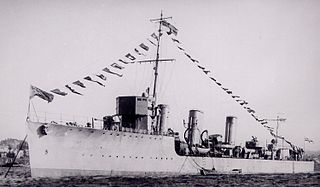 HMS Patriot was a Thornycroft M-class destroyer that served in the British Royal Navy. The destroyer entered service in 1915 during the First World War and saw service with the Grand Fleet. Following the war, the destroyer was declared surplus and in 1920, the ship was transferred to the Royal Canadian Navy. Recommissioned as HMCS Patriot, the destroyer was used primarily as a training ship. Patriot was taken out of service in 1927, sold for scrap in 1929 and broken up. 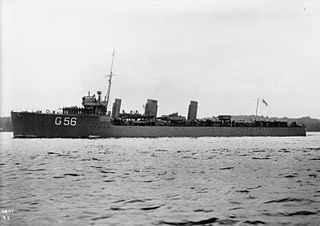 HMS Patrician was a Thornycroft M-class destroyer that served in the British Royal Navy during World War I. The destroyer entered service in 1916 and served with the Grand Fleet. Following the war, the destroyer was deemed surplus and she was transferred to the Royal Canadian Navy in 1920 and served there until 1928. She was sold for scrap in 1929.

HMS Colne was a Thornycroft type River-class destroyer ordered by the Royal Navy under the 1903–1904 Naval Estimates. Named after the River Colne in eastern England, north east of London, she was the first ship to carry this name in the Royal Navy. 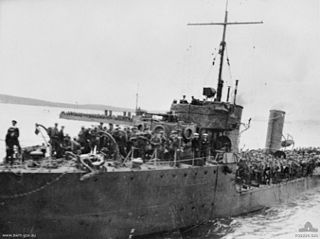 HMS Chelmer was a Thornycroft-type River-Class destroyer ordered by the Royal Navy under the 1903–1904 Naval Estimates. Named after the River Chelmer in eastern England, north-east of London, she was the first ship to carry this name in the Royal Navy.

HMS Jed was a Thornycroft type River-class destroyer ordered by the Royal Navy under the 1903 – 1904 Naval Estimates. Named after the River Jed in southern Scotland, she was the second ship to carry this name since it was introduced in 1814 for a 26-gun sixth rate ship sold in 1833.

HMS Ready was a destroyer of the M class which served with the Royal Navy. Launched by Thornycroft on 14 October 1916, the vessel was the one of two similar ships ordered as part of the Fifth War Construction Programme. They differed from the remainder of the M class in having more powerful engines. On commissioning, Ready operated within the Grand Fleet until it was disbanded at the end of the First World War. The vessel was credited with helping to sink a German Q-ship in 1917. After the war, the destroyer was initially transferred to HMNB Portsmouth, but was retired and sold to be broken up on 13 July 1926 after almost a decade of service as part of a preparation for a fleet of new destroyers.