Thoroddsen is a common Icelandic family name. It may refer to:

Björn Thoroddsen is an Icelandic guitarist. Originally a rock musician, he later focused on jazz.

Jón Thoroddsen elder was an Icelandic poet and novelist.

Kristján Eldjárn was the third President of Iceland, from 1968 to 1980.

Tómas Guðmundsson was an Icelandic author. He was known as Reykjavík's poet (Reykjavíkurskáldið, skáld Reykjavíkur).

Jón Skúlason Thoroddsen was an Icelandic author. He was born in Breiðabólstaður á Skógarströnd. His parents were sýslumaður Skúli Thoroddsen and his wife Theodora Guðmundsdóttir, who was a poet. After high school he studied law. In 1922, he published two books: Maria Magdalena and Flugur. He died in hospital after an accident.

"Hjálpum þeim" is a song recorded in 1986 by several of the most popular musicians of Iceland to gather funds in order to combat poverty in Africa.
"Hjálpum þeim" contained only the title song and it was rerecorded again in 2005 under the name of "Hjálpum þeim 2005", and then again in English in 2011 under the name "Help Them 2011" because of the crisis in Eastern Africa.

Articles related to Iceland include:

"Þú og þeir (Sókrates)" was the Icelandic entry in the Eurovision Song Contest 1988, performed in Icelandic by Beathoven. 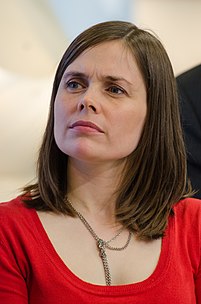 Katrín Jakobsdóttir is an Icelandic politician serving as the 28th and current Prime Minister of Iceland since 2017. She is the member of the Althing for the Reykjavík North constituency since 2007. She became deputy chairperson of the Left-Green Movement in 2003 and has been their chairperson since 2013. Katrín was Iceland's Minister of Education, Science and Culture and of Nordic Co-operation from 2 February 2009 to 23 May 2013. She is Iceland's second female prime minister after Jóhanna Sigurðardóttir.

The Cabinet of Gunnar Thoroddsen in Iceland was formed 8 February 1980.

The following lists events that happened in 1983 in Iceland.

The following lists events that happened in 1921 in Iceland.

The following lists events that happened in 1924 in Iceland.