Thoros (short in Armenian for Theodoros; Թորոս կուրապաղատ, T'oros the Curopalates; d. March 9, 1098) was an Armenian ruler of Edessa at the time of the First Crusade. Thoros was a former officer ( curopalates ) in the Byzantine Empire and a lieutenant of Philaretos Brachamios. He was Armenian but practiced the Greek Orthodox faith.

The Chronicle of Matthew of Edessa records that "Thoros son of Hethum" was installed as governor of Edessa by Tutush, who had defeated and killed emir Bouzan in the year 543 of the Armenia era (26 Feb. 1094 - 25 Feb. 1095). [2] According to Sturdza, Hethum [I] was descended from the Pahlavouni, an important family in Caucasian Armenia. He conquered land to the east of that conquered by his fellow Armenian Rupen. Steven Runciman calls Thoros the "son-in-law" of Gabriel of Melitene. [3]

Around 1094, the Seljuk emir of Damascus, Tutush I, captured Edessa and established Thoros as governor. Thoros immediately tried to take control of the city for himself; when Yaghi-Siyan, emir of Antioch, and Ridwan, emir of Aleppo, took refuge in Edessa after being defeated by Malik Shah I, Thoros tried to take them captive and ransom them. The other Edessan nobles did not agree with this and they were freed. Thoros then fortified Edessa and cut off the citadel, garrisoned by Turkish and Armenian troops. The Turks and Ortoqids besieged the city for two months, but were unable to capture it even after breaking through the walls. The Turks withdrew and Thoros was recognized as lord of the city.

As a Greek Orthodox Christian, he was not well loved by his Armenian subjects in Edessa. He resisted attacks from the Seljuks, but in 1098 had to ask for help from the crusaders, who were occupied at the siege of Antioch.

Baldwin of Boulogne had come to Edessa rather than participate in the siege, probably looking to carve out some territory for himself, and had captured Turbessel. Thoros invited him to Edessa and made an alliance with him in February 1098. Baldwin gradually convinced Thoros to adopt him as his son and heir, but having done this, Baldwin attacked Thoros' officers and besieged him in the citadel. Thoros agreed to let him have the city and made plans to flee with his family to Melitene, but shortly afterwards, on March 9, Thoros was assassinated by the Armenian inhabitants of the city, possibly at Baldwin's command, and Baldwin became the first count of Edessa. [4] 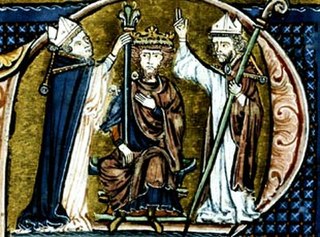 Baldwin I, also known as Baldwin of Boulogne, was the first count of Edessa from 1098 to 1100, and the first king of Jerusalem from 1100 to his death. Being the youngest son of Eustace II, Count of Boulogne, and Ida of Lorraine, he was destined for a church career, but he abandoned it and married a Norman noblewoman, Godehilde of Tosny. He received the County of Verdun in 1096, but he soon joined the crusader army of his brother Godfrey of Bouillon and became one of the most successful commanders of the First Crusade.

Bohemond II was Prince of Taranto from 1111 to 1128 and Prince of Antioch from 1111/1119 to 1130. He was the son of Bohemond I, who in 1108 was forced to submit to the authority of the Byzantine Empire in the Treaty of Devol. Three years later, the infant Bohemond inherited the Principality of Taranto under the guardianship of his mother, Constance of France. The Principality of Antioch was administered by his father's nephew, Tancred, until 1111. Tancred's cousin, Roger of Salerno, managed the principality from 1111 to 1119. After Roger died in the Battle of the Field of Blood, Baldwin II of Jerusalem took over the administration of Antioch. However, he did acknowledge Bohemond's right to personally rule the principality upon reaching the age of majority.

Kerbogha was Atabeg of Mosul during the First Crusade and was renowned as a soldier.

Nūr ad-Dīn Abū al-Qāsim Maḥmūd ibn ʿImād ad-Dīn Zengī, often shortened to his laqabNur ad-Din, was a member of the Oghuz Turkish Zengid dynasty which ruled the Syrian province of the Seljuk Empire. He reigned from 1146 to 1174.

Baldwin II, also known as Baldwin of Bourcq or Bourg, was Count of Edessa from 1100 to 1118, and King of Jerusalem from 1118 until his death. He accompanied Godfrey of Bouillon, and Baldwin of Boulogne, to the Holy Land during the First Crusade. He succeeded Baldwin of Boulogne as the second count of Edessa when he left the county for Jerusalem following his brother's death. He was captured at the Battle of Harran in 1104. He was held first by Sökmen of Mardin, then by Jikirmish of Mosul, and finally by Jawali Saqawa. During his captivity, Tancred, the Crusader ruler of the Principality of Antioch, and Tancred's cousin, Richard of Salerno, governed Edessa as Baldwin's regents. 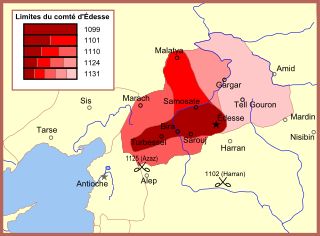 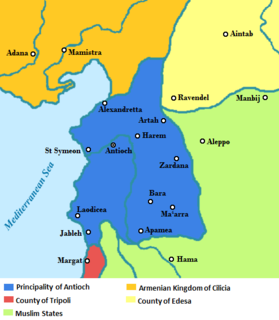 The Battle of Harran took place on May 7, 1104 between the Crusader states of the Principality of Antioch and the County of Edessa, and the Seljuk Turks. It was the first major battle against the newfound Crusader states in the aftermath of the First Crusade, marking a key turning point against Frankish expansion. The battle had a disastrous effect on the Principality of Antioch as the Turks regained territory earlier lost.

Abu Nasr Shams al-Muluk Duqaq was the Seljuq ruler of Damascus from 1095 to 1104.

Constantine I or Kostandin I was the second lord of Armenian Cilicia or “Lord of the Mountains”. During his rule, he controlled the greater part of the regions around the Taurus Mountains, and invested much of his efforts in cultivating the lands and rebuilding the towns within his domain. He provided ample provisions to the Crusaders, for example during the difficult period of the siege of Antioch in the winter of 1097. He was a passionate adherent of the separated Armenian Church.

Toghtekin, also spelled Tughtigin, was a Turkic military leader, who was atabeg of Damascus from 1104 to 1128. He was the founder of the Burid dynasty of Damascus.

Mawdud ibn Altuntash was a Turkic military leader who was atabeg of Mosul from 1109 to 1113. He organized several expeditions to reconquer lands from the Crusaders, but never succeeded.

Baldwin of Marash was a Crusader baron in Northern Syria in the 12th century AD.