Thorough may refer to:

HMS Thorough was a British submarine of the third group of the T class. She was built as P324 by Vickers Armstrong, Barrow, and launched on 30 October 1943. So far she has been the only ship of the Royal Navy to bear the name Thorough.

The Thoroughbred is a horse breed known for its use in horse racing.

A thoroughfare is a road or way for travel between places 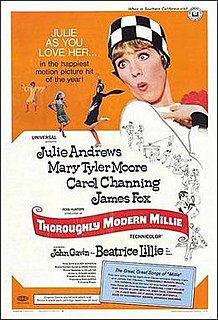 Thoroughly Modern Millie is a 1967 American musical-romantic comedy film directed by George Roy Hill and starring Julie Andrews. The screenplay by Richard Morris, based on the 1956 British musical Chrysanthemum, focuses on a naive young woman who finds herself in the midst of a series of madcap adventures when she sets her sights on marrying her wealthy boss. The film also stars Mary Tyler Moore, James Fox, John Gavin, Carol Channing, and Beatrice Lillie.

Bass ( BAYSS) describes tones of low (also called "deep") frequency, pitch and range from 16 to 256 Hz (C0 to middle C4) and bass instruments that produce tones in the low-pitched range C2-C4. They belong to different families of instruments and can cover a wide range of musical roles. Since producing low pitches usually requires a long air column or string, and for stringed instruments, a large hollow body, the string and wind bass instruments are usually the largest instruments in their families or instrument classes.

Figured bass, or thoroughbass, is a kind of musical notation in which numerals and symbols indicate intervals, chords, and non-chord tones that a musician playing piano, harpsichord, organ, lute play in relation to the bass note that these numbers and symbols appear above or below. Figured bass is closely associated with basso continuo, a historically improvised accompaniment used in almost all genres of music in the Baroque period of Classical music (c.1600–1750), though rarely in modern music.

Sheet music is a handwritten or printed form of music notation that uses modern musical symbols to indicate the pitches (melodies), rhythms or chords of a song or instrumental musical piece. Like its analogs – printed books or pamphlets in English, Arabic or other languages – the medium of sheet music typically is paper, although the access to musical notation since the 1980s has included the presentation of musical notation on computer screens and the development of scorewriter computer programs that can notate a song or piece electronically, and, in some cases, "play back" the notated music using a synthesizer or virtual instruments.

Alberti bass is a particular kind of accompaniment figure in music, often used in the Classical era, and sometimes the Romantic era. It was named after Domenico Alberti (1710–1740/46), who used it extensively, although he was not the first to use it. 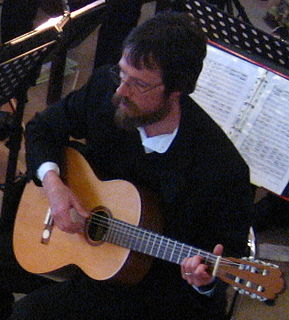 Seventh is the ordinal form of the number seven.

A fake book is a collection of musical lead sheets intended to help a performer quickly learn and perform new songs. Each song in a fake book contains the melody line, basic chords and sometimes lyrics – the minimal information needed by a musician or small group to make an extemporized arrangement of a song, or "fake it". The fake book is a central part of the culture of playing music in jazz, where strong improvisation abilities are expected from "comping" rhythm section players and "lead instruments" which play the melody and improvise lengthy solos over the chord progression.

A rhythm section is a group of musicians within a music ensemble or band who provide the underlying rhythm, harmony and pulse of the accompaniment, providing a rhythmic and harmonic reference and "beat" for the rest of the band.

Bass or Basses may refer to:

The second inversion of a chord is the voicing of a triad, seventh chord, or ninth chord in which the fifth of the chord is the bass note. In this inversion, the bass note and the root of the chord are a fourth apart which traditionally qualifies as a dissonance. There is therefore a tendency for movement and resolution. In notation form, it is referred to with a c following the chord position or as a 6
4 chord.

Jazz improvisation is the spontaneous invention of melodic solo lines or accompaniment parts. It is one of the defining elements of jazz. Improvisation is composing on the spot, when a singer or instrumentalist invents melodies and lines over a chord progression played by rhythm section instruments and accompanied by drums. Although blues, rock, and other genres use improvisation, it is done over relatively simple chord progressions which often remain in one key.

The Elektra chord is a "complexly dissonant signature-chord" and motivic elaboration used by composer Richard Strauss to represent the title character of his opera Elektra that is a "bitonal synthesis of E major and C-sharp major" and may be regarded as a polychord related to conventional chords with added thirds, in this case an eleventh chord. It is enharmonically equivalent to a 7#9 chord : D♭-F-A♭-C♭-E. 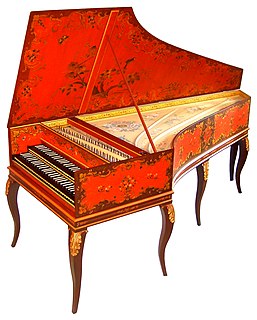