In 1977, ABC was awarded the contract to televise the Preakness. Triple Crown Productions was formed in 1985 after CBS terminated its contract with NYRA. ABC Sports won the rights to broadcast all three races, as well as many prep races. Ratings went up after the package was centralized. Other than the Kentucky Derby, the Preakness Stakes and Belmont Stakes were considered the two "other" races. ABC Sports, which had broadcast the Derby since 1975, wanted to televise all the races as a three race package. CBS Sports, which showed the other two races, had much lower ratings for them, with the possible exceptions of years in which the Crown was at stake like 1973, 1977, and 1978.

Combined broadcast arrangements with ABC continued until 2001, when NBC Sports took over. Under NBC, ratings continued to go up, by as much as 20 percent in some years. It did not hurt that many horses, like Funny Cide and Smarty Jones, were making Triple Crown runs during those years (although all of them failed). From 2002 to 2004, the Belmont had the highest ratings of any horse race on television.

After the 2004 Belmont race, the New York Racing Association ended its deal with NBC, citing a conflict over profit-sharing arrangements. ABC won the rights to the Belmont, and Triple Crown Productions was effectively dissolved related to bonuses and broadcast rights. The only function that Triple Crown Production still oversees is joint nomination fees and a small joint marketing effort.

In 2011, NBC Sports once again became the broadcaster of all three Triple Crown races in separate broadcast deals; including an extension to its existing rights to the Kentucky Derby and Preakness Stakes, plus establishing a new 5-year deal to broadcast the Belmont Stakes after ABC and ESPN declined to renew their previous contract. All three deals last through 2015, and include supplementary coverage on NBC Sports Network for all three races. The additional coverage included 14-1/2 hours of Kentucky Derby pre-race coverage including an hour and a half live special for the Kentucky Oaks and six and a half hours of Preakness Stakes pre-race coverage including a one-hour live special on the Black-Eyed Susan Stakes both carried on NBC Sports Network. [7] [8]

The Preakness Stakes is an American flat thoroughbred horse race held on the third Saturday in May each year at Pimlico Race Course in Baltimore, Maryland. It is a Grade I race run over a distance of 9.5 furlongs on dirt. Colts and geldings carry 126 pounds (57 kg); fillies 121 lb (55 kg). It is the second jewel of the Triple Crown, held two weeks after the Kentucky Derby and three weeks before the Belmont Stakes. 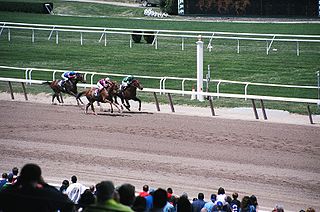 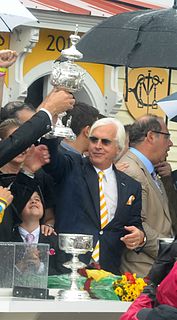 In the United States, the Triple Crown races have been broadcast on television since 1960, under various individual race-broadcaster agreements. Triple Crown Productions was formed in 1985 after CBS terminated its contract with the New York Racing Association. Prior to that, the individual racing associations made their own deals with the TV networks. ABC Sports won the rights to broadcast all three races, as well as many prep races. Ratings went up after the package was centralized. This arrangement continued until 2001, when NBC Sports took over. Under NBC, ratings continued to go up, by as much as 20 percent in some years. It didn't hurt that many horses, like Funny Cide and Smarty Jones, were making Triple Crown runs during those years. 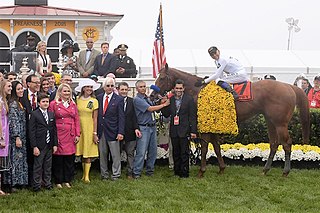 The 2014 Belmont Stakes was the 146th running of the Belmont Stakes. It was run on June 7, 2014, and was televised on NBC. California Chrome had a chance to complete the third leg of the Triple Crown after his victories in the 2014 Kentucky Derby and the 2014 Preakness Stakes. However, it was Tonalist who won the race. Commissioner placed second and Medal Count took third. California Chrome finished in a tie for fourth with Wicked Strong.

The 2016 Belmont Stakes was the 148th running of the Belmont Stakes. The 1 1⁄2-mile (2,400 m) race, known as the "test of the champion", is the final jewel in Thoroughbred horse racing's American Triple Crown series, and was held on June 11, 2016, three weeks after the Preakness Stakes and five weeks after the Kentucky Derby. The race, which had no Triple Crown at stake, was broadcast by NBC beginning at 5:00 p.m. EDT, with pre-race coverage on NBCSN starting at 3:00 p.m. The race was won by Creator by a nose over Destin. 2016 Preakness Stakes winner Exaggerator finished eleventh. 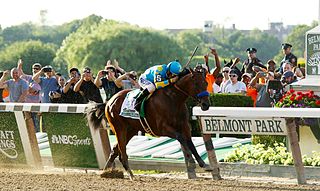 The Grand Slam of Thoroughbred racing is an informal name for the winning of four major races in one season. The term has been applied to at least two different configurations of races. 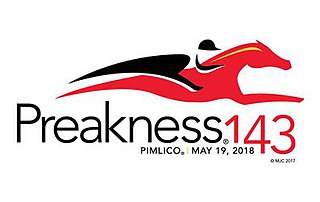 The 2018 Preakness Stakes was the 143rd running of the Preakness Stakes, the second leg of the American Triple Crown. It was a Grade I stakes race with a purse of $1.5 million for three-year-old Thoroughbreds at a distance of ​1 3⁄16 miles. It was held on May 19, 2018, at Pimlico Race Course in Baltimore, Maryland and was broadcast on NBC from 5:00 pm to 7:15 pm EDT with coverage of the undercard on NBCSN starting at 2:30 pm.

The 2020 Belmont Stakes was the 152nd running of the Belmont Stakes and the 109th time the event took place at Belmont Park. It was run June 20, 2020, and was won by Tiz the Law, the first New York-bred winner of the event since Forester in 1882. The race is one of the three legs of the American Triple Crown, open to three-year-old Thoroughbreds.