Allen joined the Colonial Mutual Fire Insurance Company as an office boy in 1886, retiring almost fifty years later in 1935 as a manager. [4] [5] 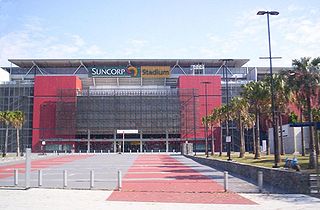 Milton is an inner suburb of the City of Brisbane, Queensland, Australia.

Jeffrey Robert Thomson is a former Australian cricketer. Known as "Thommo", he is considered by many in the sport to be the fastest bowler of his generation.

Burleigh Heads is a coastal suburb in the City of Gold Coast in Queensland, Australia. 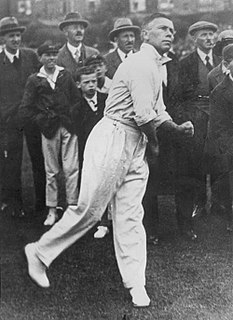 Alan David Ogilvie is a former Australian cricketer who played in five Tests from 1977 to 1978 during World Series Cricket.

Gold Coast Hospital, located at 98–136 Nerang Street, Southport was a major teaching and referral hospital and the third largest in Queensland. The Gold Coast Hospital had one of the busiest emergency departments in the state. The Hospital admitted over 60,000 patients annually.

Eastern Suburbs Football Club is an Australian soccer club from East Brisbane, Queensland, Australia. The club is the most centrally located of all the semi-professional clubs in Brisbane, situated approximately 2.7 kilometres (1.7 mi) from the city centre. Easts competes in the National Premier Leagues Queensland, in both the men's and women's competitions, and play their home games at Heath Park, East Brisbane. 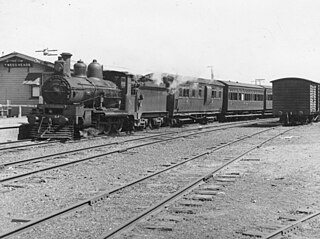 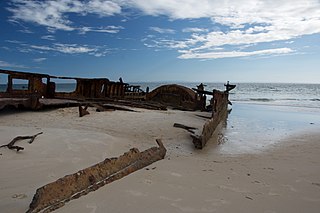 Bulwer is a small town and locality at the north-western end of Moreton Island within the City of Brisbane, Queensland, Australia.

Johnny Peebles was an Australian soccer player, official, and administrator. 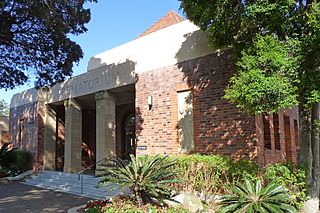 Mount Thompson Memorial Gardens and Crematorium includes a heritage-listed chapel, columbaria and other features. It is located on north-western slopes of Mount Thompson in Brisbane, Australia. The street address is Nursery Road in Holland Park. It was established in 1934 as the first crematorium in Queensland.

Holy Trinity Anglican Church is a heritage-listed church at 68 Hawthorne Street, Woolloongabba, Brisbane, Queensland, Australia. Since 1869, three church buildings have stood on this hill top site. The current church was completed in 1930. It was designed by the architect, Eric Ford featuring Romanesque and Spanish mission revival style architecture. Its preserved original architectural features make the church a traditional wedding venue of inner Brisbane. The church was added to the Queensland Heritage Register on 9 May 2008. 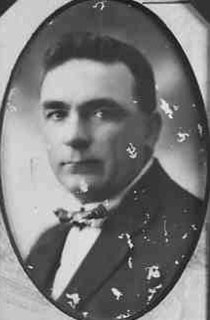 John Innes Brown was a blacksmith and member of the Queensland Legislative Assembly. 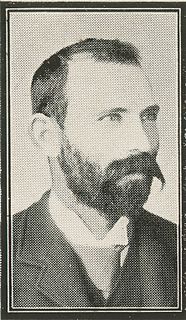 John McEwan Hunter was a member of the Queensland Legislative Assembly.

Thomas Ramsay Hall was an architect practicing in Brisbane, Australia, during the first half of the twentieth century and was involved in the design and construction of numerous major buildings in South East Queensland including the Queensland Heritage Register listed Brisbane City Hall.

Bernard Flewell-Smith (1898–1992) was an Australian fruit grower and soldier. He was one of the leaders in developing the Golden Circle fruit cannery. Son of farmer, John Francis Flewell-Smith, and Frances Maude, née Stephens, Flewell-Smith was born in Lowood on 4 March 1898. Throwing away his desire to work in medicine, Flewell-Smith overtook his father's farm when he left for the war. He later began fruit farming in Bracken Ridge after returning to Australia. In 1935 he was appointed as manager of the Committee of Direction of Fruit Marketing, succeeding W. Ranger. He previously held a position as a scholar at Ipswich Boys' Grammar School, the same school where he studied and was awarded the prize for best Junior pass in the state. In 1950 Flewell-Smith was elected as Citizen of the Week by the Brisbane Telegraph.

Richard Frank Tunley (1879–1968) was a blinds manufacturer and inventor of educational resources for visually impaired children in Queensland, Australia. He was a foundation member of the Blind, Deaf, and Dumb Institution and was central to the passage of the Blind, Deaf and Dumb Children Instruction Act of 1924 through the Parliament of Queensland which made education for visual and hearing impaired children compulsory in Queensland.

Turbot Street runs parallel to Ann Street and is on the northern side of the Brisbane CBD in Queensland, Australia. It is a major thoroughfare, linking as a three-to-five lane one-way street with the Riverside Expressway in the southwest to the suburb of Fortitude Valley in the northeast; address numbers run the same direction. It is a one-way pair with Ann Street.