Thorpe Camp, officially known as the Thorpe Camp Visitor Centre, is the former Royal Air Force barracks for RAF Woodhall Spa. It exists 2.5 miles (4.0 km) southeast from the site of RAF Woodhall Spa, in the civil parish of Tattershall Thorpe. Built in 1940 during the Second World War, the site included Officer, Sergeant and Airman messes, a NAAFI building, ration store, latrines and ablution blocks. The site closed in the 1960s. [2]

The remaining buildings - the Airman's mess, NAAFI, ablution block, and ration store are now preserved within the boundaries of the visitor centre, by the Thorpe Camp Preservation Group Limited. The visitor centre commemorates both the Royal Air Force, and RAF Woodhall Spa history, as well as civilian life in Lincolnshire in the 1940s.

The visitor centre has various dedications to RAF Woodhall Spa, including a display for each of the squadrons that were either stationed there, or had operations relating to the station. The centre also has a dedication to the Air Training Corps, an organisation that provided training and experience to young people in both World War II, and beyond.

97 Squadron was a training squadron based at nearby RAF Waddington during the First World War. [3] The squadron was disbanded on 1 April 1920 after being renumbered, becoming No. 60 Squadron. The squadron was reformed on 16 September 1935 at RAF Catfoss, and later became one of the Pathfinder squadrons in April 1943. [ citation needed ]

Commonly known as the Dambusters, No. 617 Squadron was the squadron that took part in Operation Chastise in May 1943, destroying Nazi factories, mines, and hydro-electric power stations. [4] 617 Squadron was based at RAF Scampton, but often made use of RAF Woodhall Spa during exercises and missions.

No. 619 Squadron was a Heavy bomber squadron, initially formed at RAF Woodhall Spa on 18 April 1943. The squadron flew the Avro Lancaster, and took place in many bombing raids on Nazi Germany.

No. 627 Squadron alike No. 97 Squadron was a member of the Pathfinder squadrons. It operated from both RAF Oakington and RAF Woodhall Spa throughout the war, as a bomber squadron, reconnaissance and also a specialised target marking squadron. [5]

Royal Air Force Scampton or RAF Scampton is a Royal Air Force station located adjacent to the A15 road near to the village of Scampton, Lincolnshire, and 6 miles (9.7 km) north west of the city, Lincoln, England. Wing commander J.T.S. Parker became Station Commander in August 2018.

Number 617 Squadron is a Royal Air Force aircraft squadron, originally based at RAF Scampton in Lincolnshire and currently based at RAF Marham in Norfolk. It is commonly known as the "Dambusters", for its actions during Operation Chastise against German dams during the Second World War. In the early 21st century it operated the Panavia Tornado GR4 in the ground attack and reconnaissance role until being disbanded on 28 March 2014. The squadron reformed on 18 April 2018, and was equipped at RAF Marham in June 2018 with the Lockheed Martin F-35B Lightning, becoming the first squadron to be based in the UK with this advanced V/STOL type.

Royal Air Force Coningsby or RAF Coningsby, is a Royal Air Force (RAF) station located at located 13.7 kilometres (8.5 mi) south west of Horncastle, and 15.8 kilometres (9.8 mi) north west of Boston, in the East Lindsey district of Lincolnshire, England. It is a Main Operating Base of the RAF and home to the Typhoon Force Headquarters and two front-line Eurofighter Typhoon FGR4 units, No. 3 Squadron & No. 11 Squadron. In support of frontline units, No. 29 Squadron is the Typhoon Operational Conversion Unit and No. 41 Squadron is the Typhoon Operational Evaluation Unit. Coningsby is also the home of the Battle of Britain Memorial Flight (BBMF) which operates a variety of historic RAF aircraft.

Air Vice Marshal Donald Clifford Tyndall Bennett, was an Australian aviation pioneer and bomber pilot who rose to be the youngest air vice marshal in the Royal Air Force. He led the "Pathfinder Force" from 1942 to the end of the Second World War in 1945. He has been described as "one of the most brilliant technical airmen of his generation: an outstanding pilot, a superb navigator who was also capable of stripping a wireless set or overhauling an engine".

No. 5 Group was a Royal Air Force bomber group of the Second World War, led during the latter part by AVM Sir Ralph Cochrane. 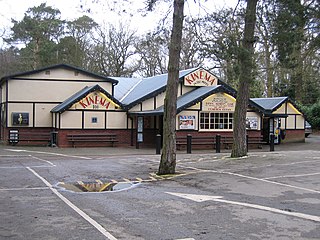 Woodhall Spa is a former spa town and civil parish in Lincolnshire, England, on the southern edge of the Lincolnshire Wolds, 6 miles (10 km) south-west of Horncastle, 23 miles (37 km) west of Skegness, 15 miles (24 km) east-south-east of Lincoln and 17 miles (27 km) north-west of Boston. It is noted for its mineral springs, cinema and its Second World War association with the RAF 617 Squadron. The cinema has the last remaining rear screen projector in the country.

No. 619 Squadron RAF was a heavy bomber squadron of the Royal Air Force during the Second World War, flying Lancaster bombers from bases in Lincolnshire.

RAF Metheringham was a Royal Air Force station situated between the villages of Metheringham and Martin and 12.1 mi (19.5 km) south east of the county town Lincoln, Lincolnshire, England.

No. 199 Squadron was a Royal Air Force aircraft squadron that operated during the Second World War and later in the 1950s as a radar countermeasures squadron.

No. 109 Squadron RAF was an aircraft squadron of the Royal Air Force.

RAF Warboys is a former Royal Air Force heavy bomber station, situated just outside the village of Warboys in Huntingdonshire.

No. 627 Squadron was a Royal Air Force Mosquito aircraft pathfinder bomber squadron that operated during the Second World War. 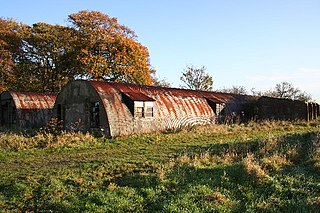 Royal Air Force Station Cammeringham or more simply RAF Cammeringham was a Royal Air Force station used by RAF Bomber Command between 1940 and 1945 and the Polish Air Force until 1946. The airfield was located between the A15 and B1398 roads, 10.3 mi (16.6 km) north of the city Lincoln, Lincolnshire, England and due east of the village of Ingham.

Tattershall Thorpe is a hamlet and civil parish in the East Lindsey district of Lincolnshire, England. It is situated approximately 3 miles (5 km) south from Woodhall Spa, and 1 mile (1.6 km) north-east from Tattershall.

RAF North Coates was a Royal Air Force station in Lincolnshire, England, six miles south-east of Cleethorpes, and close to the mouth of the Humber estuary. It was an active air station during World War I, and then again from the mid-1920s. Between 1942 and 1945, during the Second World War, it was the home of a Coastal Command Strike Wing, and from 1958 was a base for Bloodhound surface-to-air missiles, until closed in 1990.