Thorpe on the Hill

Thorpe on the Hill may refer to:

Graham Paul Thorpe, is a former English cricketer who played for England internationally and Surrey domestically. A left-handed middle-order batsman and slip fielder, he appeared in exactly 100 Test matches. 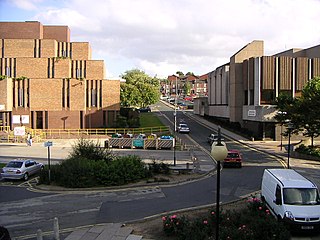 The Metropolitan Borough of Rotherham is a metropolitan borough of South Yorkshire, England. It is named after its largest town, Rotherham, but also spans the outlying towns of Maltby, Rawmarsh, Swinton, Wath-upon-Dearne, and also Dinnington and Laughton as well as a suburban and rural element composed of hills, escarpments and broad valleys.

Thorpe Cloud is an isolated limestone hill lying between the villages of Thorpe and Ilam on the Derbyshire/Staffordshire border at the southern end of Dovedale. It is a popular hill amongst the many day-trippers who visit the area, and provides a fine viewpoint north up the dale and south across the Midland plain.

Stealth is a steel roller coaster located in the Amity area of Thorpe Park in Surrey, England, UK. Built and designed by Intamin of Switzerland for £12 million, the Accelerator Coaster model opened in 2006, one year after Rita at Alton Towers, another Accelerator Coaster built by Intamin. It can reach a maximum height of 62.5 metres (205 ft) and accelerate from 0 to 80 mph (130 km/h) in 1.9 seconds. It is the fastest roller coaster in the UK, and the second tallest after the Big One at Blackpool Pleasure Beach. 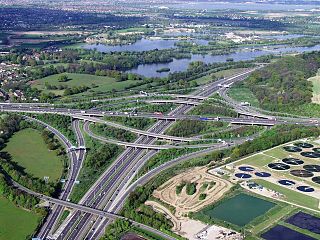 Thorpe on the Hill is a small village in West Yorkshire, England. The village falls within the Ardsley and Robin Hood ward of the Leeds Metropolitan Council. It was mentioned as "Torp" in the Domesday Book together with neighbouring Carlton, Lofthouse, Middleton, and Rothwell as part of the Morley Hundred in the West Riding.

Garth Hill College is a secondary school in Bracknell, England. It was created as Garth Hill School in September 1969 from an amalgamation of Wick Hill Secondary Modern School and neighbouring Garth Grammar School, the name of the latter referring to a former local fox hunt. The school underwent a £40 million rebuild in 2010, and was opened in September of the same year. However, it wasn't officially opened by HRH Princess Anne until March 10, 2011. The school has recently gained yet another new building for the sixth form of Garth Hill, costing £6 million and opened in 2015 by the Mayor of Bracknell.

Guthrum II was, according to some reconstructions, a King of East Anglia in the early tenth century. He should not be confused with the earlier and better-known Guthrum, who fought against Alfred the Great.

Thorpe on the Hill railway station was a station in Thorpe-on-the-Hill, Lincolnshire. It was opened by the Midland Railway on its Nottingham to Lincoln Line. It was opened in 1846 and closed for passengers in 1955 and freight on 15 June 1964.

Thorpe on the Hill is a small village and civil parish in North Kesteven, Lincolnshire, England.

Twyford and Thorpe is a civil parish in Leicestershire, England, comprising the villages of Twyford and Thorpe Satchville, and the hamlet of John O' Gaunt. The parish, which is in the Melton district, has a population of 612 at the time of the 2001 census, increasing to 628 at the 2011 census.

Thorpeness Windmill is a Grade II listed post mill at Thorpeness, Suffolk, England which was built in 1803 at Aldringham and moved to Thorpeness in 1923. Originally built as a corn mill, it was converted to a water pumping mill when it was moved to Thorpeness. It pumped water to the House in the Clouds.