Thorrur is a revenue division, mandal and a municipality in Mahabubabad district of Telangana, India. It is located on Jayaprakash Narayana road between Warangal and Khammam. It is at about 50 km from Warangal, 62 km from Suryapet and 70 km from Khammam. It is a rapidly growing town due to its location.

The region of the Mandal is mainly plain with occasional hillocks. For a satellite and map view of Thorrur please click the following Google Maps link.

Thorrur is a revenue division and mandal. Thorrur mandal consists of, including its villages has a total population of 76,519 of which 38506 are male and 38013 are female, according to 2011 census. Male female ratio is 987:1000. Of the total population, 12,179 are Scheduled Tribes and 14,468 are Scheduled Castes. The overall literacy percentage is around 55% of which male is 67% and female is 43%. Thorrur town has a population of 19,100 with 9,688 males and 9,412 females. The main language spoken is Telugu with quite a bit of Telangana accent. Majority of the population are Hindu with few Muslims and Christians. In addition, there are many tribals called lambada, mostly living in small hamlets (thandas).

Origins of the name Thorrur are not known. There is a fort (Ghadi), in Thorrur town, in the old village area, indicating local rulers (Jamindars) under Nizam or even earlier rulers. History of Thorrur is similar to that of Warangal ruled by Kakatiya's, Delhi sultanate, Mughals and finally Nizams. The region prospered during Kakatiya's period with the construction of tanks for villages, temples etc. Some people believe that name of the village thorrur came from 'Dora vuru'(village of ruler) --> 'doruru' --> 'dorrur' --> 'thorrur'.

Thorrur is in Palakurthi assembly constituency and Warangal parliamentary constituency. Though the assembly constituency is not named after Thorrur, it acts as the center for all political activities. Thorrur being the biggest town in the constituency, the main offices of all the political parties are located here. Indian National Congress and Telangana Rashtra Samithi (TRS) are the major political parties. Currently, Errabelli Dayakar Rao (TRS) and Pasunuri Dayakar (TRS) are the MLA and MP of Thorrur respectively. In the past, Dugyala Srinivasa Rao, Dr. Nemurugommula Sudhakar Rao, Nemurugommula Yatiraja Rao, were MLAs of Thorrur. The late Yatiraja Rao was the MLA of Thorrur for a period of about twenty years.

Thorrur Mandal has a ZPTC member representing it in Warangal Zilla Parishad. In addition, it has a Mandal president (MPP)elected by MPTCs belonging to different villages. Thorrur town has been declared as a municipality in 2018. Villages in Thorrur Mandal have gram panchayats with a Surpanch as the head and several ward members.

Thorrur has various state government offices for local administration. It has a Regional Development Officer(RDO), Mandal office, with a Mandal development officer (MDO) and Mandal revenue officer (MRO). In addition, it has a police station and a court to deal with law and order.

Thorrur is known for Education hub Thorrur ZPPSS is one of the best govt high schools in district.

Road is the only means of transportation to Thorrur. Nearby railway stations are Warangal, Mahabubabad and Khammam. And the nearest airport is Rajiv Gandhi International Airport, Hyderabad. TSRTC buses connect Thorrur to important surrounding cities/towns like Hyderabad, Warangal, Suryapet, Jangaon, Khammam and Mahabubabad etc. In addition, buses connect to surrounding villages of Thorrur. 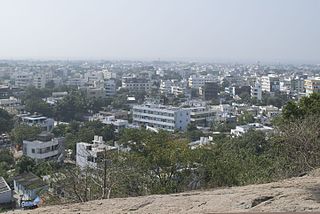 Khammam, also known as Khammamett is the city in Khammam district of the Indian state of Telangana. It is the fourth largest city in the state. It is the headquarters of the Khammam district and Khammam mandal also. It is located about 193 kilometres (120 mi) east of the state capital, Hyderabad, 61 kilometres (38 mi) from Suryapet, 120 kilometres (75 mi) from Warangal and also it is located about 121 kilometres (75 mi) North of the Andhra Pradesh state capital, Amaravathi. The river Munneru flows on the western side of the city. As of 2011 census of India, Khammam urban agglomeration has a population of 3,13,504. However, on 19 October 2012, the civic body of Khammam was upgraded to Municipal corporation Post upgradation to corporation Khammam population is approximated to be 3,07,000.

Yellandu is a town in Bhadradri Kothagudem district of the Indian state of Telangana. It is located in Yellandu mandal of Kothagudem revenue division.

Warangal is one of the two metropolitan cities in the Indian state of Telangana. It serves as the district headquarters of both Warangal Urban District and Warangal Rural District. Warangal is the second most populous city in the state, with the first being state capital, Hyderabad. In 2011, Warangal had a population of 830,281 and an area of 406 km2 (157 sq mi). 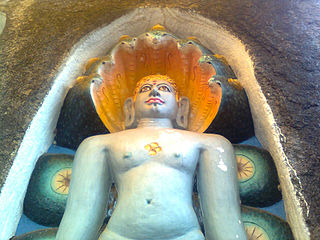 Hanmakonda is a neighbourhood and one of the three cities constituting the Tri-City of Warangal in the Indian state of Telangana. It is administered by Greater Warangal Municipal Corporation. 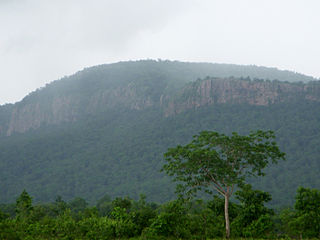 Khammam District is a district in the eastern region of the Indian state of Telangana. The city of Khammam is the district headquarters. The district shares boundaries with Suryapet, Mahabubabad, Bhadhradhri districts and with Andhra pradesh state. 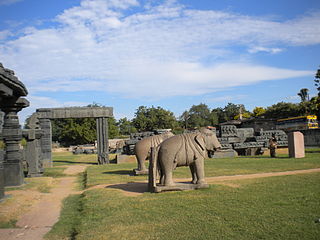 Warangal Urban District is located in the northern region of the Indian state of Telangana. The district headquarters are located at Hanamkonda.

Suryapet(listen) is a city and the district headquarters of Suryapet district in the Indian state of Telangana. It is a municipality and the headquarters of Suryapet mandal in Suryapet revenue division. The Government of India announced Suryapet to be developed under the Atal Mission for Rejuvenation and Urban Transformation (AMRUT) scheme. Suryapet has been awarded the "Cleanest city" in South India by the Ministry of Urban development in Swachh Survekshan 2017. It is also known as "Gateway of Telangana". It is located about 134 kilometres (83 mi) east of the state capital, Hyderabad and also it is located about 138 kilometres (86 mi) West of Vijayawada.

Manuguru is a census town and mandal in Bhadradri Kothagudem district in the Indian state of Telangana. It comes under Mahaboobabad parliamentary constituency and Pinapaka Assembly constituency. Manuguru is an urban area, situated on the banks of Godavari River. The town is famous for Singareni coal mines. The singareni had provided many employment opportunities. Since there is a availability of coal the TS government has taken an action to construct a power plant(BTPS) in the coal city MANUGURU Pin code of Manuguru is 507117.

Mahabubabad is a town and the district headquarters of Mahabubabad district in the Indian state of Telangana. It is on the west bank of the Munneru, which is one of the tributaries of the River Krishna. Mahabubabad is known for the Bayyaram Mines. 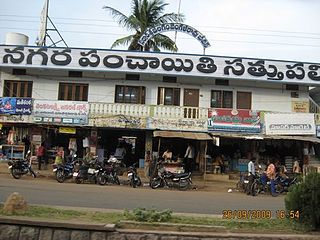 Sathupalli is a town in Khammam district of the Indian state of Telangana. It is a Municipality in Sathupally mandal of Khammam revenue division.It is situated approximately 276 km (171 mi) east of Hyderabad, 80 km (50 mi) from Khammam and 200 km (120 mi) from Warangal. It is about 135 km (84 mi) north of Amaravati, the state capital of Andhra Pradesh, and 126 km (78 mi) west of Rajahmundry 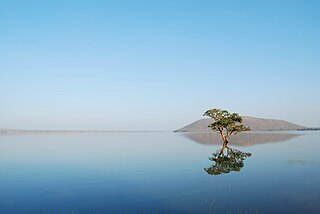 Kadiyam Srihari is an Indian politician, Former Deputy Chief Minister and Education Minister of Telangana State. He was the Member of Parliament from Warangal constituency from the State of Telangana (2014-2015). He was MLA from Ghanpur(Station) Constituency and worked as Minister in the cabinets of Nandamuri Taraka Rama Rao and Nara Chandrababu Naidu. He was the PolitBureau member of Telugu Desam Party, and the General Secretary of Telugu Desam Party. He was the Minister of undivided Andhra Pradesh from 1995 to 2004 in Marketing, Social Welfare later Education and later Irrigation under the Cabinet of Nara Chandrababu Naidu. He joined Telangana Rashtra Samithi party and is its politburo member. He took oath as a cabinet minister in Telangana government on 25 January 2015 as a Deputy Chief Minister and also Education Minister.

Annaram is a village in Thungathurthy mandal, Suryapet district, Telangana, India. Most of the families in Annaram are very well educated and has more than one employee in the family. The village has supplied Engineers, Professors, Govt.officers, Teachers and specialists over the generations and are serving in India and abroad. Nearly 95% of population is literate. This village has three govt. schools including one high school which was started in late 1970s. Though politically very active, there aren't many notable leaders from the village. Main crops for the farmers of this village are paddy, moong, ground nut, chilli and cotton.

Mahabubabad is a district in the Indian state of Telangana. It was a part of the Warangal district prior to the re-organisation of districts in the state in October 2016.The district shares boundaries with Suryapet, Khammam, Bhadradri Kothagudem, Warangal Rural, Jayashankar Bhupalpalle and Jangaon districts. It consists of Dornakal, Mahabubabad, Maripeda, Thorrur Municipalities.