The Thorsberg moor (German : Thorsberger Moor, Danish : Thorsberg Mose or Thorsbjerg Mose, South Jutlandic: Tosbarch, Tåsbjerre "Thor's hill") near Süderbrarup in Anglia, Schleswig-Holstein, Germany, is a peat bog in which the Angles deposited votive offerings for approximately four centuries. It is the location of important Roman Iron Age finds, including early Elder Futhark runic inscriptions such as the Thorsberg chape, a Roman helmet, a shield buckle, and an early example of socks (attached to trousers). The finds are of similar importance as the contemporaneous finds from Illerup and Vimose in Denmark.

The deposits were made from approximately 100 BC to 500 AD [1] and are clearly votive in nature. [2] However, it is doubtful that they were dedicated specifically to Thor. The placename may reflect worship of Thor there by Danes during the Viking Age rather than by Angles during the Roman Iron Age. And as Engelhardt noted, although the 'Thor's hammer' symbol occurs on several finds from the site, it is a motif that can be found in many non-Germanic contexts, even on Native American artefacts. [3] They include early examples of clothing, both Germanic and Roman, in particular the footed trousers, which are commonly dated to the 4th century but which now appear to be no later than 300 AD; [4] objects of Roman workmanship including two phaleræ , military decorations in the form of richly decorated gold discs 13.2 cm in diameter made in the 3rd century in the workshop of Saciro, thought to have been near Cologne, which have the image of a seated man with a spear, possibly a representation of Mars; [5] and objects of Germanic workmanship, notably the Thorsberg chape, a piece of a scabbard bearing one of the earliest inscriptions in runes.

Some of the Germanic fibulæ and shield bosses of ultimately Roman origin appear to be from Germanic tribes in Greater Germania, who were in closer contact with the Romans than the Angles. [6] After approximately 200 AD, the deposition of weapons increased, possibly as a result of conflict between tribes such as the Marcomannic war (166 to 180 AD), possibly as a result of Roman campaigning. Many of the objects deposited, especially the weapons, have been made useless by breaking, bending, etc. It was common practice among Celtic peoples to ritually "kill" such weapons. [7]

In addition to the weapons and other man-made objects, the deposits in the bog include isolated bones. [8] Just outside the moor is an Iron Age tumulus with a stone circle. 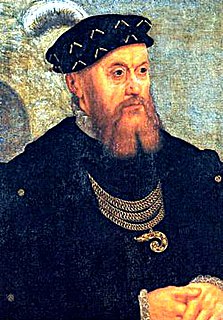 Christian III reigned as King of Denmark from 1534 and King of Norway from 1537 until his death in 1559. During his reign, Christian formed close ties between the church and the crown. He established Lutheranism as the state religion within his realms as part of the Protestant Reformation.

The spatha was a type of straight and long sword, measuring between 0.5 and 1 m, with a handle length of between 18 and 20 cm, in use in the territory of the Roman Empire during the 1st to 6th centuries AD. Later swords, from the 7th to 10th centuries, like the Viking swords, are recognizable derivatives and sometimes subsumed under the term spatha. 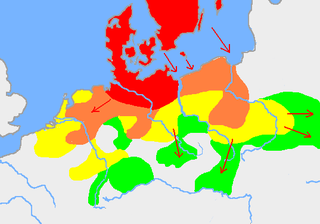 The Jastorf culture was an Iron Age material culture in what are now north Germany and Denmark, spanning the 6th to 1st centuries BC, forming the southern part of the Pre-Roman Iron Age. The culture evolved out of the Nordic Bronze Age. 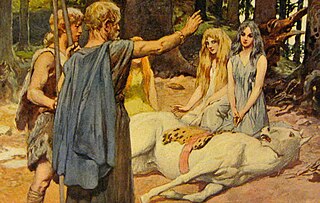 Germanic paganism included various religious practices of the Germanic peoples from the Iron Age until Christianisation during the Middle Ages. Religious practices represented an essential element of early Germanic culture. From both archaeological remains and literary sources, it is possible to trace a number of common or closely related beliefs among the Germanic peoples into the Middle Ages, when the last areas in Scandinavia were Christianized. Rooted in Proto-Indo-European religion, Proto-Germanic religion expanded during the Migration Period, yielding extensions such as Old Norse religion among the North Germanic peoples, the paganism practiced amid the continental Germanic peoples, and Anglo-Saxon paganism among the Old English-speaking peoples. The Germanic religion is best documented in 10th- and 11th-century texts from Scandinavia and Iceland. 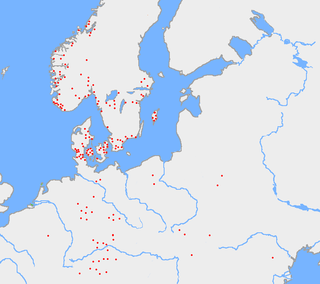 The Elder Futhark, also known as the Older Futhark, Old Futhark, or Germanic Futhark, is the oldest form of the runic alphabets. It was a writing system used by Germanic peoples for Northwest Germanic dialects in the Migration Period. Inscriptions are found on artifacts including jewelry, amulets, plateware, tools, and weapons, as well as runestones in Scandinavia, from the 2nd to the 10th centuries.

The Hjortspring boat is a vessel designed as a large canoe, from the Scandinavian Pre-Roman Iron Age. It was built circa 400–300 BC. The hull and remains were rediscovered and excavated in 1921–1922 from the bog of Hjortspring Mose on the island of Als in Sønderjylland, southern Denmark. The boat is the oldest find of a wooden plank ship in Scandinavia and it closely resembles the thousands of petroglyph images of Nordic Bronze Age ships found throughout Scandinavia. The vessel is a clinker-built wooden boat of more than 19 metres length overall, 13.6 metres long inside, and 2 metres wide. Ten thwarts that could have served as seats, span the boat with room for two persons each; this suggests space for a crew of at least 20 who propelled the boat with paddles. The boat would have weighed an estimated 530 kilograms (1,168 lb), making it easily portable by its crew. 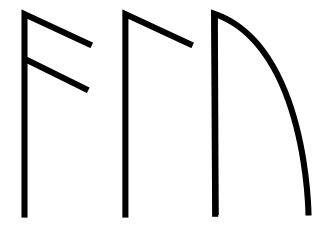 The sequence alu is found in numerous Elder Futhark runic inscriptions of Germanic Iron Age Scandinavia between the 3rd and the 8th century. The word usually appears either alone or as part of an apparent formula. The symbols represent the runes Ansuz, Laguz, and Uruz. The origin and meaning of the word are matters of dispute, though a general agreement exists among scholars that the word represents an instance of historical runic magic or is a metaphor for it. It is the most common of the early runic charm words.

Finds from Vimose, on the island of Funen, Denmark, include some of the oldest datable Elder Futhark runic inscriptions in early Proto-Norse or late Proto-Germanic from the 2nd to 3rd century in the Scandinavian Iron Age and were written in the time of the Roman Empire.

No Celtic group employed a regular military as we would understand it. Organisation was according to clan grouping and social class. A war leader's immediate companions were known in Gaulish as *ambaxtoi a term which passed into Latin and from which the English ambassador ultimately derives.

Windeby I is the name given to the bog body found preserved in a peat bog near Windeby, Northern Germany, in 1952. Until recently, the body was also called the Windeby Girl, since an archeologist believed it to be the body of a 14-year-old girl, because of its slight build. Prof. Heather Gill-Robinson, a Canadian anthropologist and pathologist, used DNA testing to show the body was actually that of a sixteen-year-old boy. The body has been radiocarbon-dated to between 41 BC and 118 AD.

The contact between Germanic tribes and Romans can be divided into four aspects as defined by archaeologist Are Kolberg: the military aspect, the trade aspect, the gift aspect and the plunder aspect. All these aspects give probable answers as to how and why Roman objects got into Germanic hands, and why a vast amount of Roman objects still can be found as far north as Norway. It is noteworthy to understand how Roman objects brought elements of Roman culture with them, and how they to some extent shaped Germanic culture and identity. 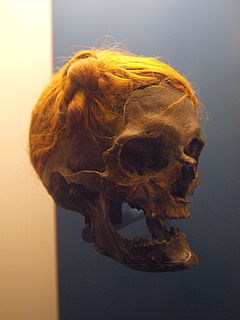 Osterby Man or the Osterby Head is a bog body of which only the skull and hair survived. It was discovered in 1948 by peat cutters to the southeast of Osterby, Germany. The hair is tied in a Suebian knot. The head is at the State Archaeological Museum at Gottorf Castle in Schleswig, Schleswig-Holstein.

Anthropomorphic wooden cult figurines, sometimes called pole gods, have been found at many archaeological sites in Central and Northern Europe. They are generally interpreted as cult images, in some cases presumably depicting deities, sometimes with either a votive or an apotropaic (protective) function. Many have been preserved in peat bogs. The majority are more or less crudely worked poles or forked sticks; some take the form of carved planks. They have been dated to periods from the Mesolithic to the Early Middle Ages, including the Roman Era and the Migration Age. The majority have been found in areas of Germanic settlement, but some are from areas of Celtic settlement and from the later part of the date range, Slavic settlement. A typology has been developed based on the large number found at Oberdorla, Thuringia, at a sacrificial bog which is now the Opfermoor Vogtei open-air museum.

Karl Schlabow was a German archaeologist, museum director and conservator with specialisations in textiles and in restoration of bog bodies. He founded the Neumünster Textile Museum. Since his death, his restorations have been called into question as overly aggressive.

The road toll was a historical fee charged to travellers and merchants in return for permission to use the roads and waterways of the country or state concerned. It was reinforced in the Holy Roman Empire by the law of Straßenzwang which meant that traders in certain goods had to use specified roads. In return, they were usually guaranteed safe passage under the right of escort or Geleitrecht. The road toll was widespread especially in medieval times, and, in addition to the payments from the staple rights, was an important source of income.

Olaf Klose was a German art historian and librarian.